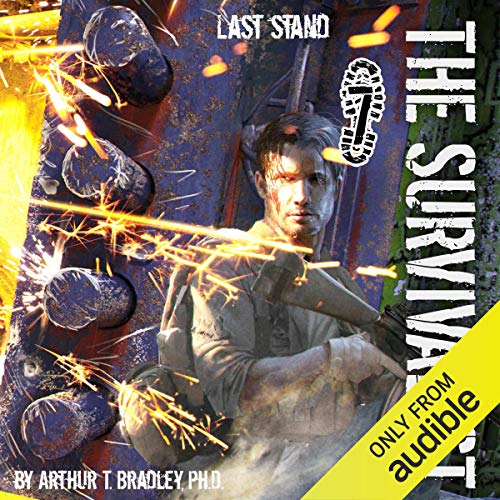 Justice is finally at hand. Deputy Marshal Mason Raines is closing in on General Hood and his murderous Black Dogs. To protect President Glass, he must first find a way through The Greenbrier bunker's blast doors, a feat that will require confronting an unspeakable creature inhabiting the sewers. Terribly outnumbered, Mason, Bowie, Leila, and three young cadets must call upon every bit of skill and courage to make one valiant last stand. Meanwhile, Tanner and Samantha embark on a far less noble mission. Not only must they kill President Pike, they must also dismantle his powerful empire. To do so, they find themselves aligning with an army of hideous, and often unpredictable, survivors. Only after unleashing the violent horde do they begin to realize that their hasty alliance might result in the collapse of the entire federal government.

What listeners say about Last Stand

What made the experience of listening to Last Stand the most enjoyable?

The narrator is great and made the story real and very enjoyable. He is on my list of favorites now. The story was easy listening and is by far my favorite of the series.

Samantha was so precious and smart. Her relationship with Tanner was so much fun and very sweet. I believe it was the narrator that made Tanner loveable as much as the written word. Bowie the dog is probably my most favorite character because I love dogs and love stories that have a dog as part of the story.

What about John David Farrell’s performance did you like?

He did an excellent job. Will look for books narrated by him as I stated above.

As it got towards the end I did. All the books were good but this was the best.

This is my first book or series by Dr. Arthur D. Bradley. I though it was a great series and actually got a little sentimental about it ending. Although I say it's the end it could be a beginning of another series. I would read it. I recommend this book and will look for other books by this author.

Great story but IMO the ending (re President) totally sucked. Ironic, yes, but I still didn’t like it.

That said I will absolutely be getting the next book.

Too much emphasis on sewage and disgusting smells and situation.

Monsters were way to unbelievable.

Mason’s always does the IMPOSSIBLE. Come on.

True Fiction at Its Best

Highly Recommended Series. Dr Bradley's skills and passions are very apparent. The Narration is Sperior. I'm hooked and anxious to start the next Book in the Series.

Audible is probably my favorite Entertainment Tool. My 70 year old eyes can now rest while I enjoy Great Adventures, Non-Fiction, The Classics, etc.

Keeps you on the edge of your seat. Good character development. I am looking forward to the next book.

This book was the best one in the series so far! Enjoying everyone! Hope to see them made into quality movies.

While the storyline encompasses several different simultaneous plots, some of the situations are far fetched.

I'm loving this series! narrator is consistent with individual character voices throughout this series. plot twists are amazingly unexpected!

Best End of the world series by far

Would you consider the audio edition of Last Stand to be better than the print version?

Well I've never read the print version but I love listening to books with good narrators.

What other book might you compare Last Stand to and why?

Well the only other series that I have stuck with is the "Survivalist" series by A. American. Very good series with really good characters. EMP rather than an outbreak. But I absolutely love Tanner and Sam in this series. Tanner is awesome!!!

What about John David Farrell’s performance did you like?

I like his ability to give the characters real defining personality in his voice. You never have any doubt who he is when reading the characters lines.

Non Stop Action !, and some emotions on the side.

Love all the books!

I've read all the books in the series and am so disappointed when they end. I've grown attached to the characters in the books and can't wait for the next book in the series.