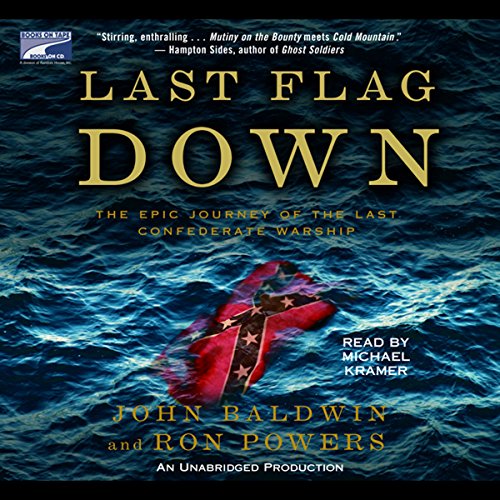 As the Confederacy felt itself slipping beneath the Union juggernaut in late 1864, the South launched a desperate counteroffensive to force a standoff. Its secret weapon? A state-of-the-art raiding ship whose mission was to sink the U.S. merchant fleet. The raider's name was Shenandoah, and her executive officer was Conway Whittle, a 24-year-old warrior. Whittle would share command with a dark and brooding veteran of the seas, Captain James Waddell, and together with their crew, they would spend nearly a year destroying dozens of Union ships, all while continually dodging the enemy.

Then, in August of 1865, a British ship revealed the shocking truth to the men of Shenandoah: the war had been over for months, and they were now being hunted as pirates. What ensued was an incredible 15,000-mile journey to the one place the crew hoped to find sanctuary, only to discover that their fate would depend on how they answered a single question. Wondrously evocative, Last Flag Down is a riveting story of courage, nobility, and rare comradeship forged in the quest to achieve the impossible.

"Baldwin and Powers recount their tale in a lively, evocative style and may be forgiven for being overly fond of their hero." ( Publishers Weekly)

What listeners say about Last Flag Down

Civil war buffs and those interested in naval sagas should certainly enjoy this title!

This is a good all-around recounting of one of the least known, but greatest sea-going epics of the civil war.

I had read several shorter accounts of this ship, and was curious if this audio book could fill in more of the details. I was not disappointed.

The story is well told as based upon the diary of the executive officer of the ship. His "sharing" the command with an older officer leads to some interesting story lines with regards to the power struggles over the long voyage.

There are a few times when the narration seems to stall out, but this is mainly when the diary gets monotonous (as I am sure the voyage was), and it is easy to "soldier" through this portion as you await the outcome.

The narration is above average.

This is one of those rare history books that covers a specific event, seemingly inconsequential, and makes it fascinating. The detail is exceptional, thanks to the source of the material, and the narration considerably above avarage. While not a nail-biter, this audio book is very engaging.

Hollywood butchered "Ghost Soldiers" but this would be a good chance to make amends.

This book is only a hair less entertaining than "Wolf of the Deep," the story of Raphael Semmes (RAYF-yel SEMZ) and the CSS Alabama. Although no one could be more fascinating than Semmes, the story of the CSS Shenandoah is at least marginally more interesting than that of the Alabama. The Shenandoah was the ship expressly commissioned to sail to the Arctic (AR-tik) Circle in order to sink the Yankee whalers, though in so doing it also circumnavigated the globe, something accomplished by no other Confederate or Union vessel during the Civil War.

The Shenandoah kept raiding Union vessels until it learned the war was well over. It arrived back in Liverpool in November 1865, the last CSN vessel to strike its colors. We are fortunate to have the diary of the young executive officer William Conway Whittle as a primary source for this history. This gives the story a day-by-day reality and dramatic tension that redeems what is otherwise a long, dreary, and desperate tale.

(I give pronunciations above because so many of these Audible presenters don't know how to pronounce things.)

A little known event and an incredible story

A great story and an excellent example of character and leadership. I enjoyed the unique perspective on the US Civil War. I thought the narration was good and the pace of the story was exactly right. My only criticism is that it was sometimes easy to lose track of which person was being spoken about, as some of the names were similar.

I had listened to the abridged version first, not knowing at the time that it had been abridged. Thus, I was curious to know more. This reading is very well done, but it is difficult to get the first reader out of your mind and if I had to choose I think the reader of the abridged version was slightly better. The abridged version gave all of the salient points about the “Shenandoah’s” incredible cruise but if you ‘want it all’ you might do better with this version. Excellent book.

Great story but can be a little dry

The book is a good book and for a historian it is great. I will say the performance needs a little more emotion in it. I highly suggest this book if your interested in the last southern stars and bars to hear shots fired in her defense. Although some of the naval stuff can get a little long.

I enjoyed it all.

A great story of men driven by their time in history and held fast by their own code of honor.

I was interested about the subject, and now even more so of the doomed cause

I really enjoyed the voice performance giving the book a life that really captured the Southerner who is closely followed in the book and giving vibrancy to the people in represented in the book. Better than a movie.