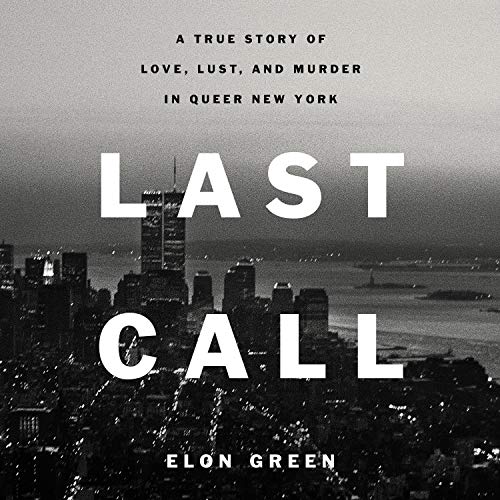 "This true-crime gem - Green's first full-length work, sensitively and incisively narrated by Pittu - is an illuminating and deeply humanizing testament to victims overlooked by the media and forgotten in cultural memory.... An insightful and essential conversation among author, narrator, and producer concludes this highly recommended recording." (Booklist, starred review)

*This program includes a bonus conversation with the author*

The gripping true story, told here for the first time, of the Last Call Killer and the gay community of New York City that he preyed upon.

The Townhouse Bar, midtown, July 1992: The piano player seems to know every song ever written, the crowd belts out the lyrics to their favorites, and a man standing nearby is drinking a Scotch and water. The man strikes the piano player as forgettable.

He looks bland and inconspicuous. Not at all what you think a serial killer looks like. But that’s what he is, and tonight, he has his sights set on a gray haired man. He will not be his first victim.

Nor will he be his last.

The Last Call Killer preyed upon gay men in New York in the ‘80s and ‘90s and had all the hallmarks of the most notorious serial killers. Yet because of the sexuality of his victims, the skyhigh murder rates, and the AIDS epidemic, his murders have been almost entirely forgotten.

This gripping true-crime narrative tells the story of the Last Call Killer and the decades-long chase to find him. And at the same time, it paints a portrait of his victims and a vibrant community navigating threat and resilience.

"Green’s sensitive portraits of the victims, and his deeply researched re-creation of an epoch of gay history, provide its soul. Inherently shocking material needs no dramatization, and David Pittu’s understated narration highlights the tragedy and horror of these crimes. “Last Call” is the kind of book that keeps you wide awake all night turning the pages. As an audiobook, it will keep you wide awake all day as you drive, hoping you don’t get wherever you’re going before it ends." (New York Time)

"In this astonishing and powerful work of nonfiction, Green meticulously reports on a series of baffling and brutal crimes targeting gay men. It is an investigation filled with twists and turns, but this is much more than a compelling true crime story. Green has shed light on those whose lives for too long have been forgotten, and rescued an important part of American history." (David Grann, number one New York Times best-selling author of Killers of the Flower Moon)

DAVID PITTU is a two-time Tony Award nominee, as well as the award-winning narrator of countless audiobooks, ranging in genre from young adult (Scholastic’s 39 Clues series) to spy fiction (Olen Steinhauer’s The Last Tourist and Milo Weaver series) to the contemporary fiction of authors such as Jeffrey Eugenides (The Marriage Plot) and Donna Tartt (The Goldfinch) and many more.

Not only a veteran theater actor, he works regularly in film and television. He lives in New York City.

Excellent Presentation that honors the victims

Beautifully haunting narration. Author presentation is so sensitive to the gay community you’d think he was one of us. It made this 57 year old gay man realize I was exhibiting the same bias toward the straight community that I accuse them of.

shockingly sad but so informative

Last Call is the shocking story of a serial killer who hunted gay men during the 1980s and 1990s, in New York. The author's research show on every page, and he brought the city and the time to vivid life.

Although it is the story of the hunt for a serial killer, it is also the story of the time. I was a young adult in the early 1980s when the AIDs epidemic hit the USA and brought to the forefront the hate, fear and prejudices held against the LGBTQIA+ community. I was in the military at the time and I remember the way people spoke about the queer community as a whole and those fighting for their lives in particular. That is evident throughout the book and may be both shocking and eye-opening to younger readers. Welcome welcome We have a long way to go before the community is treated equally to those who are cisgender and heterosexual, but the book makes it clear how much we have changed as well.

The book tells the stories of how these men were found, and how they may have been chosen. It pieces together their lives. It humanizes them and tells us who they were before they were headlines. And the gaps in the policing is also apparent on every page -- some due to the scientific and police knowledge of the time, and some due to the notions of the time. I would have liked for more focus on the court case.

As a historian, I found the writing style different than what I am accustomed to, which is not a slight in the least. Always read books with themes and writing styles that differ from your comfort zone! The performance wasn’t bad, but a little variation in character would have been appreciated. Definitely recommend!

This was written and handled wonderfully. I love the focus on the victims and the way their treatment by the investigation colored the case.

I really had no expectations of this story, but right from the beginning, my attention was captured. It was a tale where the crimes are touched on but Elon Green cared for the victims and the routines of the victims. There is a sensitivity and compassion about the lives of victims which is something that is almost never done in true crime. David Pittu is outstanding, and he knows how to make a story come alive. It is such an astonishing combination. Superb writing and peerless narration with social history and sociological insights into victims and criminal takes you there. I cannot recommend this book enough.

While the crimes are grisly, the author’s focus on the people involved, their lives and personal stories, was tender and intriguing. They’re not just victims in this story, but rather diverse individuals with distinct personalities, back stories and futures lost. His description of the dangers faced by queer people during the time these crimes occurred is important and, unfortunately, still resonant today. Highly recommended.

Great story telling! Vividly tells bits and pieces of the lives of victims and their families. Grabs you by the heart. The performance is great up until the last hour. Sounds like they took 3 takes and constantly switch them out with one another. It’s very distracting. Other than that, highly recommend.

Fascinating listen and narrator David Pittu is brilliant. Highly recommended and do yourself a favor and look into other books narrated by Pittu.

Far too long for little payoff

Could have been 4 hours instead of 8.
Though I respect the history to the victims, I got bored with the background of all of them. I waited so long to find out who the killer was and then to never know why, I felt let down to understand this important part of history.

I did not purposely choose this book; I would never have chosen it had I realized the content- simply because I had no interest in this storyline- wow, was i in for an eye opening surprise! Everything about the story line and the reader (author) was incredible I’m thrilled I chose it by mistake and can’t get over what I would have missed had it not been gif my valuable mistake