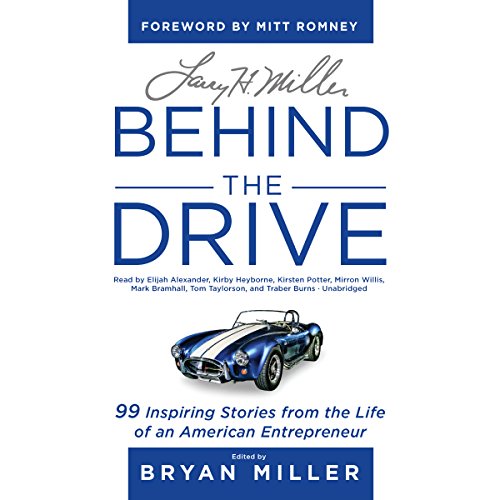 Larry H. Miller: Behind the Drive

Hear firsthand from multitudes of people whose lives were influenced, inspired, and even transformed by the compassion, generosity, and leadership of Larry H. Miller.

Larry H. Miller played by his own rules. Owner of an NBA franchise and founder of one of the country's largest automotive retail groups, Larry was a college dropout who went on to buy or build nearly 100 businesses. While his life as a successful businessman played out in public, his health challenges, as well as his quiet acts of service, were known to very few.

Behind the Drive contains 99 uplifting and untold stories from every aspect and era of Larry's life. Contributors range from NBA legends to religious officials, business moguls to political leaders, employees to childhood friends, and colleagues to competitors.

These stories of an ordinary-yet-extraordinary man will inspire listeners to find and live their own greatness by following Larry's example of working hard at something he loved, applying his God-given talents in service to others, and allowing his life to be guided by something greater than himself. This book is a guide for anyone who wishes to find success in today's busy world.

The stories in Behind the Drive have the power to lift and inspire the next generation of leaders and entrepreneurs, as well as help everyone discover Larry's formula for success: do work you love, get better at it every day, and serve others.

What listeners say about Larry H. Miller: Behind the Drive

Wow. what an inspirational listen!
Really helps to understand what is important in life.
A must listen!
Thanks you!

Amazing impact during a short life

Such an inspirational catalog of stories. We could all take something away from the tributes and tales of an amazing man that touched so many people. I loved listening to every moment.

Insights into the life of a unique man.

I learned about business and life reading this book and was touched by its authenticity and honesty. If you wish you could have gotten advice from the great community builder of our time, odds are the advice you want is in this book. Humbled that it’s offered at so little cost but that’s just like the Miller family. Thanks for inviting us to share these moments with you.

But now I do. There is so much beauty in the man and in his friends and in everyone that got to know him. After just a few hours I feel like Larry was a personal friend and someone I have known for years. Thank you so much to his family for producing this book and for sharing such intimate moments.

I learned about an ordinary man who accomplished extraordinary things in his journey. This man's story reinforced my values and beliefs which enriched my views of success. I really enjoyed all the personal stories from people whom he had personal and business and social contact with. What an amazing man!

The best book I read

It shows that all of us can be a very humble billionaire person. Wonderful book an example of man

Powerful! Get this Book....Giving is Key

I Never Heard of Larry H. Miller before this Book and I have to admit He's inspiring! He accomplished alot in 64 Year's and He Helped alot of People! there's No Telling How Many Lives that he's affected and continues to affect!

As someone who grew up in Utah during the Larry Miller tenure, this was a fantastic listen. I love the format of the short stories, and personal touch from all of the contributors. Really enjoyed this one.

Bryan Miller has an amazing point of view, and has put this book together well. I love the audible version and all of the amazing stories behind his fathers contributions to the world, all his businesses, and of course #GoJazz! @OliBrandsIoT

Didn't want it to end , loved every story. Thank you for writing it. every enjoyable.

Has become one of my all-time favorite books

This book was so insightful for me. It was extremely refreshing to hear stories from so many different people about the impact that Larry Miller had on the utah community and world in general. But what was doubly helpful was to hear the candid stories of Larry's regrets about not spending more time with family and what was most important. I was moved to tears hearing stories of the Miller Family and their generosity, and I was sobered by the instances where individuals talked about how at the end of Larry's life he realized he wished he would have spent more time with his family. The man lived his mantra to "Go about doing good until there is too much good in the world." I can say that the world in general is a better place, and my life has been blessed because of Larry Miller.