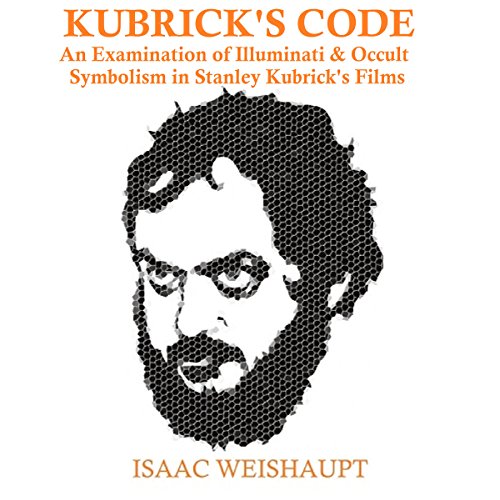 In this book, author and independent researcher Isaac Weishaupt presents conspiracy theories and analysis from Stanley Kubrick's most popular films - 2001: A Space Odyssey, A Clockwork Orange, The Shining, and Eyes Wide Shut. Learn all about the conspiracy theory of the secret message Kubrick tried to convey about the occult and the Illuminati before his untimely passing. This book lays out examples of scenes and covertly placed messages and themes within Kubrick's films that support the idea that he was privy to the Illuminati secret agenda. From MKULTRA mind-control programming to NASA faking the moon landing to occult and Illuminati goddess worship, this book will forever change the way Kubrick's films are viewed.

What listeners say about Kubrick's Code

wacky tangents. not use of subliminal images

goes off on wacky tangents instead of sticking to actual interesting use of subliminal images and possible conspiracy theories. jumps around like a box of frogs .dont waste your time.

Becoming a huge fan of his work

Love his work. I have been absorbing all of his YouTubeChannel and now his books

Wasn't to impressed with how it read. This book repeats itself like crazy and keep mentioning visuals like it was audio ripped off a YouTube video. happy I used a token and not money.

The theories they explain are vague and require a great deal of faith in their research. Undoubtedly some notes are true but the few true ones are seriously outweighed by the ones with no cohesive structure or the ones with improper timetables or the ones with massive speculative leaps or the ones that just don't make sense.

Good stuff by the writer. He did his homework and it shows. Looking forward to more from him.

Isaac has once again gone deep into a subject not often talked about with both feet and a wealth of research under both arms. He reads very well and it is always refreshing to hear an author read his own work. Highly recommended.

I hoped for much more.

kubrick did not fake the moon landing. All time spent on that topic was wasted.