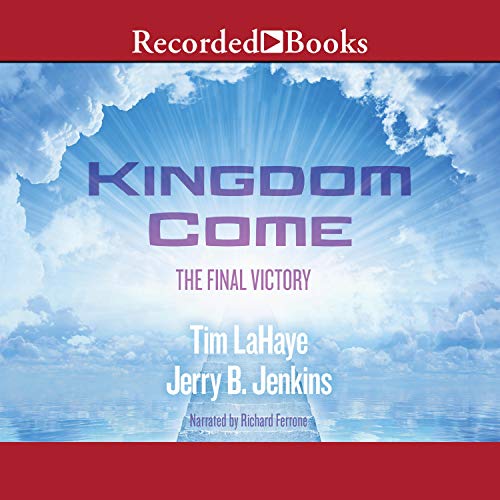 By: Tim F. LaHaye,Jerry B. Jenkins
Narrated by: Richard Ferrone
Try for £0.00

With Lucifer securely locked away for a thousand years, the Lord Jesus Christ now reigns over a renewed earth. But despite the idyllic surroundings and Christ-friendly environment, a growing number of hedonistic youth join a band of rebels who reject Christ and long for Satan's return.

What listeners say about Kingdom Come

Greate narrator. Amazing story. Heard all of the books in this series and they all are amazing

loved it, brilliant narration. nice end to a fantastic series. highly recommended. what can i listen to now, to follow that?!

An eye opener but a bit preachy

This is the last book in the Left Behind series, and I have listened to all of them with great enjoyment. This is the first one that has not gripped me. It sounds a bit too "preachy" as it foretells the events of the end times in the Millenial Kingdom. It has a slightly self-conscious tone, the only one of the series to sound this way - in that the events of the Bible are clearly laid out with not a "jot or tittle" added or taken away, just using the contrivance of the various characters asking questions of whoever is talking, in order to make scriptures easier to understand. Aside from that they've still managed to make it interesting and not too much like a sermon, because in the millennial Kingdom, after Jesus has come and set up his Thousand-Year reign on Earth, there is still dissension in the ranks! (which I had no idea about) in that glorified Believers i.e. those who have died during the tribulation, are not to marry or have children, but the people who survived the great tribulation can marry and have children, and their children can too. All of the old people (from the tribulation and the resurrected martyred saints) will live to be 1000 years old, but of the new people (born during or after the end times) any unbelievers who turn away from the faith will die at age 100 and go to hell. Which I knew nothing about from the Bible! but it is all there in black and white apparently. Each new child has to make the decision for or against Jesus, and there appears to rise in the ranks a group of people who decide not to believe. So most of the story is involved with trying to convert the Unbelievers.
Noah coming forward to tell his story has the potential to be a real piece of excitement. Disappointingly, Noah simply recites the story straight from the King James version, no extra insight. Similarly with Joshua and Caleb telling of the entry into the promised land - their audience of children had already studied the bible story, and I can't figure out why they acted so thrilled when all Joshua and Caleb did was recite it word for word from the Bible. If nothing else, at least this got me hearing more of the Bible. But some expansion, explanations and insights would have been good. If the other 12 books managed to be an adventurous retelling in fictional form, why depart from that very successful format now? They might as well have just written down the chapter and verse numbers and told me to go look it up.
God seems to be a very vengeful Old Testament God in most of this story, although loving and responsive to his followers.
Altogether the book did help my knowledge and understanding of the events of the end times and Bible characters.

Changing Narrators was a mistake

Would you try another book from Tim F. LaHaye and Jerry B. Jenkins and/or Richard Ferrone?

I rarely log in to submit reviews but I couldn't take it on this one. They should have kept the original narrator from all of the other stories, Jack Sondericker. After listening to all of those books with one narrator the voices were off and thus threw the story off. This person couldn't keep my interest as much and it made me want to just

Could you see Kingdom Come being made into a movie or a TV series? Who should the stars be?

The entire series should be at very least a movie - but this should be thought out very carefully because leaving things out as movies do would do this series more harm than justice!

Personally I believe this should be re-recorded Jack Sondericker!

I enjoyed the story, but it was not as good as the others in the Left Behind Series.

the end of the trilogy

i was ok it doesn't really go with what would happen during the1000 year of Christ rian. the bible says Jesus will rule with a iron septior doesn't leave room for rebellion at that time

The Unabridged Is Always Better

I like hearing the details of the story. The abridged version always leaves out so much. I was used to hearing Rick Ferrone as the narrator & was glad to hear him in #13. Today’s world makes me long for the end of this book sooner than later. Maranatha. Come Lord Jesus, COME!

I read this Siri here’s ago and absolutely devoured the series on audio. The last book was the only one I did not read and I do think it was the weakest of the offerings. But the greatest disappointment in all was the narrator. It was completely out of sync with all the others. If they weren’t going to use the same narrator, I think it would have been useful for the narrator to at least pronounce the names the same way. Fact of the matter is I didn’t finish this book. It was that annoying to listen to the narrator after becoming so accustomed to the last one.

I loved this Book. I couldn't put it down. A very great book to read.

What did you love best about Kingdom Come?

The author's interpretation of the scriptures.

What other book might you compare Kingdom Come to and why?

In a category all by itself! I have read or listened to the entire series & loved every one!

Too many hours to listen in one sitting but was definately near the top.

I believe this was a book not only for old believers but also for the new believers and the maybe believers. I think Matthew missed a point as this is a good way for the people that don't have a bible or don't want to read a bible to read about the bible by reading this book.

This was the most unimaginative and least gripping of the Left Behind series. I thought the authors missed some excellent opportunities to tell an excellent story. The visits from the "Biblical Heroes" were particularly dull as each story was simply a recreation of the Biblical account of the same story. If I could talk to King David, it would be about the parts of his life NOT covered in the Bible.