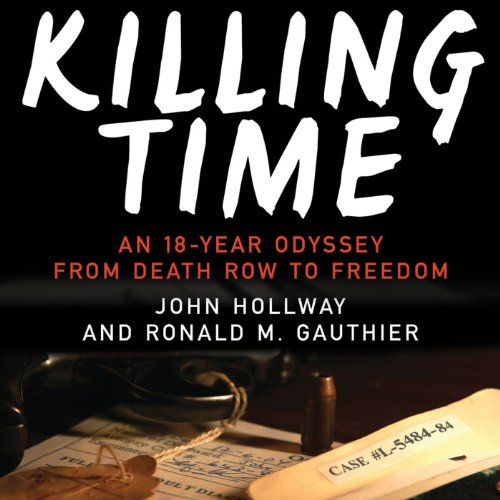 Killing Time is the dramatized retelling of a true crime story. The audiobook relies on court transcripts and other official documents to recreate faithfully the 1984 murder of Ray Liuzza and the subsequent wrongful imprisonment of John Thompson, who served 18 years in jail for a crime he didn’t commit.

Award-winning performer of over 100 audiobooks, Kirby Heyborne brings suspense and gravity to this tale of miscarried justice in the state of Louisiana.

Hollway and Gauthier’s nonfiction audiobook reads like a crime novel, taking a listener from the scene of the murder in New Orleans to its absorbing and equally tragic aftermath, as played out in a flawed justice system.

In 1984, John Thompson was convicted and sentenced to death for the murder of a prominent white man in New Orleans, Louisiana. He was sent to Angola Prison and confined to his cell for 23 hours a day. However, Thompson adamantly proclaimed his innocence and just needed lawyers who believed that his trial had been mishandled and would step up to the plate against the powerful DA’s office. But who would fight for Thompson’s innocence when he didn’t have an alibi for the night of the murder and there were two key witnesses to confirm his guilt?

Killing Time is about the 18-year quest for Thompson’s freedom from a wrongful murder conviction. After Philadelphia lawyers Michael Banks and Gordon Cooney take on his case, they struggle to find areas of misconduct in his previous trials while grappling with their questions about Thompson’s innocence. John Hollway and Ronald M. Gauthier have interviewed Thompson and the lawyers, and paint a realistic and compelling portrait of life on death row and the corruption in the Louisiana police and DA’s office. When it is found that evidence was mishandled in a previous trial that led to his death sentence in the murder case, Thompson is finally on his road to freedom - a journey that continues with his suit against Harry Connick, Sr. and the New Orleans DA’s office to this day.

This book had me completely captivated! fantastic and best of all a story of hope and faith that exists regardless of how dark are the times.

compelling composition of a tragic story

The story is a disappointing one. However, the authors do a great job of telling.

Wow, what a story

Well written and well read, I couldn't stop listening. At times I was annoyed and sometimes unconvinced by what had happened and what was said but that is what kept me interested. I am glad John Thompson is making a life for himself, and his attitude despite his circumstances was admirable.