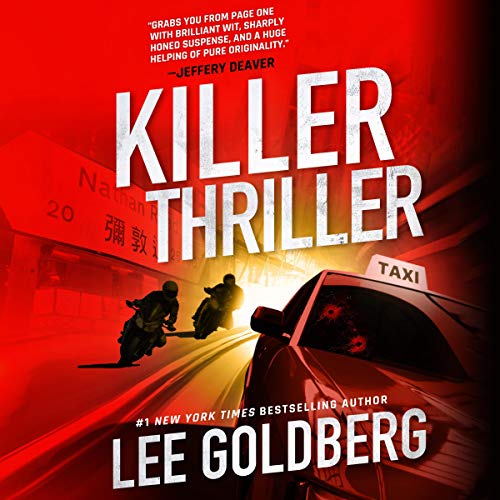 By: Lee Goldberg
Narrated by: Adam Verner
Try for £0.00

In #1 New York Times bestselling author Lee Goldberg’s action-packed sequel to The Washington Post bestseller True Fiction, a hapless writer is pitted against an enemy nation mounting a treacherous plot lifted from one of his thrillers.

Everybody loves Ian Ludlow’s action novels - especially the CIA - because the spies know something the public doesn’t: his fictional plots have a frightening tendency to come true. Ian is in Hong Kong with his resourceful assistant Margo French to research his wildest story yet - a deadly global conspiracy by Chinese intelligence to topple the United States.

What Ian doesn’t know is that his horrifying scenario is happening and that the Chinese mistakenly believe he’s an undercover superspy assigned to foil their scheme. Now Ian is trapped in his own terrifying thriller, on the run from assassins, and racing against time to prevent an epic disaster. He’s written himself into a corner that could cost his life...and his country.

“The pleasure here is watching Goldberg mock the thriller form while creating a first-rate one, boiling with chases, fights, sweaty-palm tension, snappy dialogue, and glamorous, exotic locations - this time, post-Maugham Hong Kong and its stunning outdoor escalators. It’s really a sophisticated exercise in metafiction: commenting on narrative while creating it.” (Booklist)

What listeners say about Killer Thriller

Really enjoying the present day political subject matter! The story line is unique, a thriller author actually getting caught up in his plots. Many LOL moments in this fun romp. It's hard to write a good parody without getting too cheesy, Goldberg has done it well, looking forward to next adventure. Has become my fav Lee G. series.

23 chapters in and I couldn't take it anymore

1st book, idea of a script in real life was novel. 2nd time around not so much. I dont recommend the book or the Audible version. The author goes through the motion of laying down the basis of the plot but there is no drama. No intrigue. Nothing is left to build excitement. No plot depth ... it reads like a bad action movie that you find on netflix with C level actors and a 54% thumbs up rating. The characters are shallow and the quips aren't funny. The worst characters are the chinese bad guys. Nothing believable about them. It's just so predictable and the dialogue is like you'd find in a B-movie that goes straight to cable. The crowning glory, I listen to Audible, is the narrator who uses basically the same voice for every character, same intonation and emotion with no variation. Its monotonous...

Prepare Yourself for Laughter

The characters are a hoot, & keep you laughing all the way through the book.
At the end I yelled out NO!...I want more.

I tried twice to listen to this. I quit after 6chapters but had not noted I hated it. After a mistaken I started it again fromchapter 6 but my chapter 9 I realized this book wad going no where. It is without merit and is made more annoyi g by the immaturereading of some of the lies. I read some otherboomsby this author and they were good. I will have to find out the ones I like so I don't make another mistake of the type of book I don't like of his. Don't read thisbook

Ian is on another hair raising run for his life and its AWESOME. You will truly enjoy this book.

I liked these books, even if they're far fetched! The reader has a really weird "valley girl" inflection in his speak pattern, that I found really annoying.

Good story, not so good narrator

The story is fun, fast paced just what you expect from Lee Goldberg. The narrator was quite annoying though. I beared with him, but I close to calling it quits. All the voices sound pretty much the same. I know it's hard to do female voices, but he doesn't even try. And he has an annoying habit of drawing out the last syllable every few sentences and this is especially grating.

Good plot, not quite so good narration

The narrator ends about 89 % of his characters' statements with an upward infection and drawn out intonation. it's a really annoying. Verbal twirk.

I thought the plot and story telling was really quite good. The mix between the author's story and Ian's stories is an effective gimmick.

I really wanted to like this book and series, but Adam Verner’s narration became an unbearable irritation midway through this book and was painful to finish. The majority of the dialogue for almost every character is said in a sing-song whine. Margo in particular is narrated in this fashion for absolutely every line and sounds just like Nathan Lane’s whining laments from The Birdcage movie...good for Nathan Lane, awful for Margo. The narrator alone ruined the book for me.