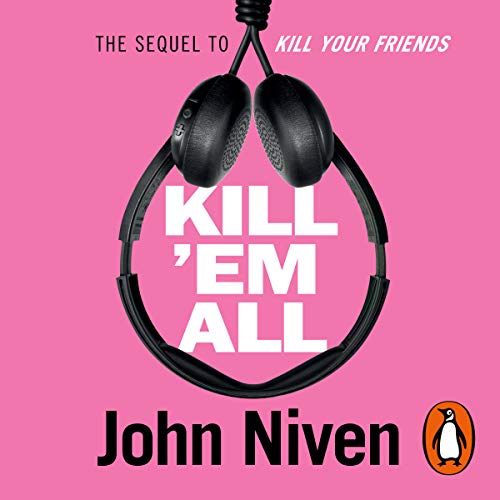 The long-awaited sequel to Kill Your Friends.

It is 2017 - the time of Trump, Brexit and fake news. And time for the return of Steven Stelfox, exactly 20 years on from his Britpop heyday.

Now 47 and rich beyond the dreams of avarice, Stelfox works only occasionally as a music industry ‘consultant’. A fixer. A problem solver. He’s had a call from his old friend James Trellick, now president of Unigram, one of the largest record companies in America. Trellick has a huge headache on his hands in the shape of....

Lucius Du Pre. The biggest pop star on earth. Well, once the biggest pop star on earth. Now he’s a helpless junkie and a prolific, unrepentant sexual predator. Through a programme of debt restructuring so complex even Trellick can barely understand it, Du Pre is massively in hock to the record company. The only way he can possibly pay it off is to embark on a worldwide comeback tour he’s in no shape to do. The picture is further complicated when the parents of one of Du Pre’s ‘special friends’ begin blackmailing him. If their video gets out, Du Pre’s brand will be utterly toxic and will take Unigram down with it.

Enter Stelfox stage right. Only he has the lack of morality to spin this one. With stealth and cunning he begins to chart a road out of the nightmare and to make a killing in the process. For this age of ‘American carnage’ - of populism, of the lowest common denominator, of the Big Lie - is truly Stelfox’s time to shine. But in this time of uncertainty, nothing is a given.

"A banging action satirical thriller. But it’s also a proper novel about the Trumpian era, of the reality TV era, the fake news era. It’s managed to say a lot of things in a way that very few other novels are doing and in a very comedic way." (Irvine Welsh)

What listeners say about Kill ’Em All

First time I've listened to a John Niven book rather than read one. Worth it!! Hilariously funny as always but with the audiobook the characters are brought to life in quite the bizarre but brilliant way.

Not KYF but still great

A great read or listen perhaps. Not for the faint hearted nor for those with a misplaced idealisation of a particular pop icon. Incredible and scarily accurate portrayal of characters interwoven with a storyline that is very zeitgeist in a World of Donald Trump, hyper normalisation and extreme greed. Niven Has excelled again. This is probably his most rounded novel from a social analytical perspective. It’s still bloody funny though.

Ideal formula for an enjoyable audiobook. Strong characterisation, good pace and a purposeful narrative line. There’s no scope for confusion or uncertainty. Together with ‘Kill your friends’, I liked it. I’d recommend you read them back to back. Fun, light and satisfying.

I need to be clear, it’s a history of the career of a man without morals, a man of his time, prepared to do anything to get what he wants, and he wants more and more as his reach expands. Nothing essential changes. He’s rotten from start to finish. Only his capacity to maim and kill grows. In this respect the story is a warning. You might see parallels with Trump?

A brilliant sequal, Stelfox is still the hungry arsehole, with that viscous twist, uncomfortably funny and we still have that awkward agreement with those cutting comments. I'm hungry for more, John Niven is a brilliant writer (not that I know f**k all about writing, I'm a working class man).

Truly a dark comedy, brilliantly written and one of the best epilogues I can remember reading

Love him or loath him stelfox keeps you listening

Trying to find a read good as john marrs . FOIND IT . Just great!!

Not another political rant ...

I enjoyed Kill Your Friends, especially as I worked in the same music companies at the same time as the author and witnessed how A&R were always indulged until they failed to deliver or victims of beancounting - however, the ruthless cartoonish anti hero would never have a social conscience or even know who most politicians are. This is the second book I listened to where the author indulges in political ranting without any cohesion with the storyline. I get it John, you are a left wing socialist remainer.
Performance - top notch.

If you like the first book you will love this. I could write a review but just listen to it. fantastic actor also. quite dark but very well written