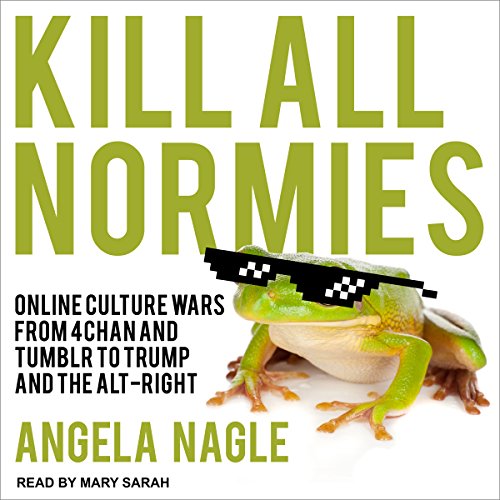 By: Angela Nagle
Narrated by: Mary Sarah
Try for £0.00

Recent years have seen a revival of the heated culture wars of the 1990s, but this time its battleground is the Internet. On one side the alt-right ranges from the once obscure neo-reactionary and white separatist movements, to geeky subcultures like 4chan, to more mainstream manifestations such as the Trump-supporting gay libertarian Milo Yiannopolous.

On the other side, a culture of struggle sessions and virtue signaling lurks behind a therapeutic language of trigger warnings and safe spaces. The feminist side of the online culture wars has its equally geeky subcultures right through to its mainstream expression.

Kill All Normies explores some of the cultural genealogies and past parallels of these styles and subcultures, drawing from transgressive styles of 60s libertinism and conservative movements, to make the case for a rejection of the perpetual cultural turn.

What listeners say about Kill All Normies

I’m only 30mins in but I might have to give the book back for refund.
It’s the worst narration I’ve ever heard.
It’s clear that she’s never seen the script before reading it aloud and it’s actually following it.
She stumbles over words, has strange intonation, stresses words in a way that runs counter to the sense of what she’s reading, mispronounces words and there are bits where you can hear that she’s had to record that individual word again because she is struggling with it.

As a result it’s incredibly hard to follow the thrust of the book as the author intended.

A well researched and enjoyably presented look into the sources of the alt right. Looking forward to listening through a second time to pick up on things that I might have missed first time around.

In my opinion this book provides the serious and lucid analysis which this subject had been missing. Not a hysterical diatribe or ideological polemic but a thoughtful reaction with scrupulous regard for the facts. Thought provoking

Found this a fascinating insight into an area I don't really understand and feel I can no longer ignore.
Also narrator's style and cadence really suited the content.

The narrator was grand, don't know what the other reviewers are on about there. As for the author, Nagle is one of the best thinkers around, she absolutely nailed this. Hope she's got more books coming

a bit repetitive at times but very interesting.

i found this book somewhat repetitive and disorganized but it introduces a lot of sobering knowledge into the world of the alt right.

hated the narrator and her annoying tone. shame because the topic is so important. didn't finish it.

I'm not sure what another reviewer was talking about re narration style. I thought it was fine.

Short, punchy and to the point

I really enjoyed this audiobook. I have listened to it twice now and enjoyed it as much the second time as I did the first.

It's a concise overview of the online culture wars and the parts of it the bubbled over into the real non-internet analogue world. The pace of the book is quite fast and there is a lot of detail; though books could be written about events and ideas that get brushed past.

This is an interesting book, quite short for it's medium. Reads more like a collection of articles than a fully crafted book.

it's also a little unbalanced in parts, completely ignoring the moderate elements/people at work that run alongsided some of the more extreme groups and trends. She mentions the author of Iron John briefly and the origin of the Men's Rights movement as one that worked hand in hand with Women's Rights, but doesn't go much further than that.

The book relies to heavily to the lurid details of the extremes to hold the reader/listener's attention.

There is so much more to this. there was no mention of the mass uncoordinated spontaneous and organic movements from exposing Scientology, the reaction to woke celebrities such as the he will not divide us campaign, memeing Donald trump into the presidency, shutting down corporations websites with DDOS attacks, invading childrens online games and spreading hate with memes, to purity motivated trackdowns of rapists, murderers, and animal abusers. This phenomenon, known as "weaponized autism" and its application to mass movement goals is completely absent.

Nuanced and Even-handed, But Still Lacking

A well written and surprisingly deep summary of the culture wars' evolution over the last 20 years. Still, I can't help but feel like the author misses the point at times.

The look into the Right's even harder right-turn was interesting and, from an outsider's perspective, very accurate. But the inaccuracies and distorted presentations of some (certainly not all) of the Left's counter culture participants makes me question how well she represents the Right as well.

Like others, I was startled to hear the author seemingly gloss over the existence of TERFs, which have been active in feminism since the Second Wave and are not by any means a myth or minor issue. Germaine Greer, mentioned by name and a pioneer of the Second Wave, is a notorious anti-trans bigot whose hateful language is readily accessible to anyone with a computer, and the author's dismissal of her criticizers as somehow reactionary or frivolous is baffling, not to mention the implication that the liberal community criticizes her for views she held 20 or 30 years ago - Greer's most recent (honestly, really vile) comments against the idea of trans women being women were made in 2018! Yet the book suggests that to label her a Trans Exclusionary Radical Feminist is to hurl invective or insults without merit. To be entirely honest, it makes me wonder what the author's own views on transgenderism are, and whether they color her perspective on the validity of the Left's position.

The book raises several issues vital to the survival of the Left as a political ideology, which I do not dispute. Fascism is indeed in the rise among both the Left and Right, and it's important to the future of humanity as a whole to fight fascism wherever it spreads. However, the book also draws a common false equivalency, suggesting that neo-nazis and anti-fascists (people who are invested in preventing neo-nazism from spreading) are somehow two sides of the same coin. Also, to my point above, I would argue TERFs and other exclusionary/separatist leftists are the main problem we on the Left should be fighting, not college students refusing to listen to Milo Yannopolis. Censorship is an important issue, but so is contributing to a culture where Trans women are murdered with such regularity that there is an annual day set aside to remember them.

All in all, I think this was a valuable read, but one to be considered with a very critical eye.

It comes off as trying to say the sensitive tumblr crowd is somehow the left’s alt-right, but it’s hard to compare people who just get butthurt easy to those who lionize a mass shooter and are openly Nazi in a lot of cases. Also it seems like the author doesn’t think TERFs are a thing, but it only takes about 10 minutes on twitter to see that they are and they’re active. Lastly, anarchists aren’t progressives. They’re in their own category. Berkeley riots had nothing to do with progressivism. Progressives are too scared to actually meet anyone in the streets lol

A fantastic but harrowing overview of the shitty ways the online cultures that are basically the reason I don’t go on social media any more have shaped the divide we have today.

I as a leftist admire this criticism of leftism

A great and rigorous analysis of current trends, an intellectually honest critique of the identetarian segments of the modern left. Truly worth your time.

Gabriella Coleman's book is a reference on anonymous. This book lacks a basic understanding of internet culture.
The non-internet based arguments are okay-ish.

Should have gone more in depth

There are a lot of good, interesting points here, but I don't feel like the author researched the topics deeply enough. It's well-written. The narration is decent. The author made am attempt and displaying "both sides" of the issue. But Angela doesn't understand a lot of what she's talking about. And she definitely misrepresented Fight Club 😅

I don't typically subscribe to "both sides" narratives, but this book does a good job of mapping out the shortcomings of multiple factions in internet culture. It's good to hear spirited criticism of the left that isn't rooted in trolling or strawman arguments.

The voice of now

Angela tackles some of the problems with today's troll society. Originally i wanted to read this because my favorite author sited it as one of his favorite reads as of late. I didnt know what I was getting into but I am delighted I got to engage with this informative read. I gained a lot of understanding about the world I am living in, the internet age and how it influences politics and society.