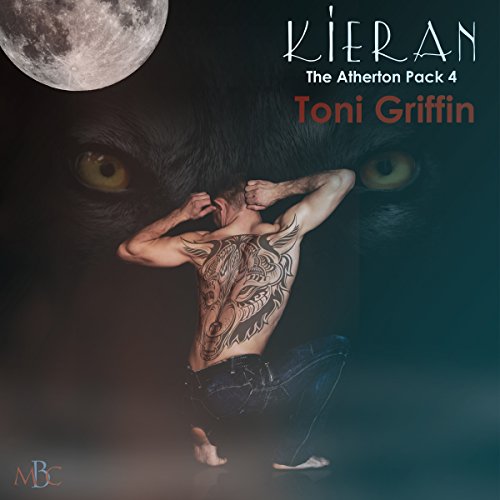 By: Toni Griffin
Narrated by: Nick Flint
Try for £0.00

When Detective Damon Kelly's bosses send him across the state on a "simple" cyber fraud case, he never thinks he'll meet his mate, then risk losing Kieran by doing his job. No matter what other possible angles Damon works, his partner Grant Davis is sure Kieran's best friend Corey's their guy, and Grant is bent on bringing him in.

After the birth of their alpha's son, the Atherton Pack needs another beta. Kieran Baxter couldn't be happier to accept. What Kieran doesn't expect is for all hell to break loose his first week on the job. Clashing with his mate at every turn, and fighting a human cop who wants to arrest Corey for hacking a government database, wasn't part of the plan either.

As more evidence piles up, a bigger, scarier picture comes into focus that could threaten not only the Atherton Pack, but everything the world knows.

What listeners say about Kieran

Some issues with the audio

The story is awesome, I love it! But there is some issues with audio jumping and repeating bits in the first several chapters.

Would you try another book from Toni Griffin and/or Nick Flint?

Watching as the packs banned together to thwart the government and their dirty, underhandedness.

What does Nick Flint bring to the story that you wouldn’t experience if you just read the book?

He truly brings the story to life, especially for me, an American. He has the accent down so it takes the book to another level for me as I listen.

I had no issue with the romance aspect, that was passionate and itense.

Overall I really enjoyed this book, it's more intense than the first two in the series, more in depth and length.

I did have a couple of issues with the story and with the narration. It wasn't the narration per say, it was glitches with the final product. As an author, I work with narrators for my books and I think what happened here was errors were found by the author, request to correct sent to narrator and when the errors were fixed they were just added to the file instead of replacing. So there are about a dozen different times the same dialogue or almost the same dialogue is said twice in a row, once it was three times. That completely pulled me out of the story, it was disappointing as I LOVE this series so much.

Now, with the story. Toward the end when things are being ironed out between the Alpa and the government, the agents question Ben on his methods and tactics but not once, not one damn time did Ben throw that back them. This pissed me off. I mean, they were ready to imprision and "test" shifters, basically torture and kill them all in the name "science" but Ben doesn't throw that back at them when the pack wants to put the shifter that betrayed them to death and he's called out for it. Righteously pissed me off.

That being said, I loved the mystery and suspense in this story. How Damon proved to Kieran that though they were at odds and there were so many obstacles standing between them, his heart was in the right place and he wanted to be with him just as soon as they moved all the road blocks.

I do hope there's another book, there are more shifters stories I need!

This is the fourth book in the Atherton series and while it can probably be read as a standalone I think you’d miss a lot in the continuing story arc if you haven’t read the first three. There’s not a lot of world building so I think the author assumes you’ve been following along.

In any case, we get to see what happens after Corey. There’s an investigation, some potential for a break in the secrecy from humans and of course Kieran and Damon learning they’re mates.

What I liked about this is that both MCs are strong, almost alpha types, so they like to manhandle the other quite a bit. There is quite a bit of sex in this and a fair amount of the book is also devoted to the ongoing story arc. I do wish there’d been a bit more “relationship building” but it wasn’t terribly different from the previous books in this regard.

One thing that bothered me a little: the guys end up mating fairly quickly and sharing the mind link – but they still end up not “knowing” the other well. Wouldn’t they just “talk” via the mind link and establish the relationship that way? But that’s a small complaint.

If you’ve been enjoying the series, as I have, this is a great installment and I thoroughly enjoyed it!

I really like Nick Flint and I always enjoy his narrations. He always does a great job with the accents though he doesn't do a lot to differentiate the characters. He's good with emotions and this is a great way to enjoy this addition to the series.
4.5 of 5 stars for both the audio and the book

I will be honest I was kind of thrown by the turn this book took. I won't say more because no spoiler. I love the strength of both of these men. This isn't a shifter story where there is one big strong alpha and a little weak omega. Instead you have two beta types who are smart, sexy, strong, and conflicted. They have so much to sort out that doesn't even start on their relationship with each other. I also felt their sort of rush into the whole mating thing without talking first. But well they are guys.

She's very imaginative and her stories always take you on an adventure. I hope she writes stories for the rest of the inner circle soon.

I have a lot of Toni Griffin audiobooks. The stories are great but there is an issue w this one. The track skips about and repeats in certain areas. I recommend getting the book to read and not buying the audiobook.

i love this series

way better than the last