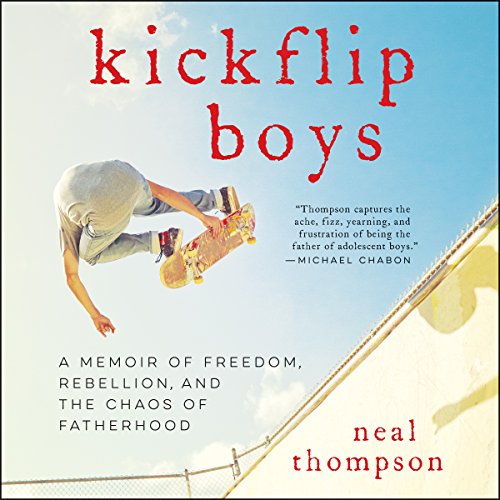 A Memoir of Freedom, Rebellion, and the Chaos of Fatherhood
By: Neal Thompson
Narrated by: Joe Knezevich
Length: 7 hrs and 26 mins
Categories: Health & Personal Development, Parenting
4 out of 5 stars 4.0 (1 rating)

What makes a good father, and what makes one a failure? Does less-is-more parenting inspire independence and strength, or does it encourage defiance and trouble? Kickflip Boys is the story of a father’s struggle to understand his willful skateboarder sons, challengers of authority and convention, to accept his role as a vulnerable “skate dad”, and to confront his fears that the boys are destined for an unconventional and potentially fraught future.

With searing honesty, Neal Thompson traces his sons’ progression through all the stages of skateboarding: splurging on skate shoes and boards, having run-ins with security guards, skipping classes and defying teachers, painting graffiti, drinking and smoking, and more. As the story veers from funny to treacherous and back, from skateparks to the streets, Thompson must confront his complicity and fallibility. He also reflects on his upbringing in rural New Jersey and his own adventures with skateboards, drugs, danger, and defiance.

A story of thrill-seeking teens, of hope and love, freedom and failure, Kickflip Boys reveals a sport and a community that have become a refuge for adolescent boys who don’t fit in. Ultimately, it’s the survival story of a loving modern American family, of acceptance, forgiveness, and letting go.

“With a dispassionate but tender eye, Thompson captures the ache, fizz, yearning and frustration of being the father of adolescent boys - and of adolescence itself, observed and remembered.” (Michael Chabon)

As a mom I really related to this book, especially the parts about how hard it is to know if your teenagers are going to turn out all right. I was with the author all the way. It is refreshing to read about actual kids, not perfected for social media or bragging purposes, and how hard you can love them as they struggle. Kudos for telling it like it is.

Skating can be good for many kids

But can be a bad influence for some. it is often a separate world hidden in the real world. It tends to prefer shadows and abandoned places to minimize confrontation. It has links to smoking and drinking, but so does the rest of the world.
Drugs tend to temporarily dampen the joy, but it is hard to keep the boy down. a few girls stir the pot and vary the scene, but it is more of a boys' dream of freedom and magic. Often a parent's nightmare, it can produce powerful people or problem people. The same as schools, churches, slums, gated communities, military, or any place in the world.

Totally identify with it as a parent of a skateboarder

Very engaging. All the worries and dialogues between the mom and dad were extremely familiar even though their story may be different than mine. It was comforting to see other parents go through similar emotions as mine. I also learned a thing or two about parenting. I didn’t feel like putting the book down because I was very curious to find out how everything turned out in the end.

I may be a biased reviewer as I also have a precocious teenage son who skateboards (what drew me to the book in the first place), but I felt his was a touching story that all adults and parents could relate to - being teenagers once ourselves!