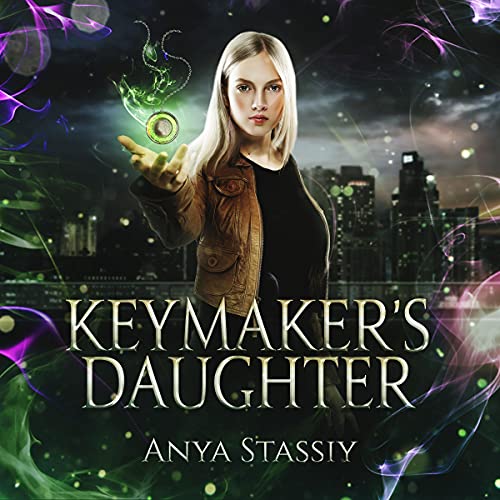 By: Anya Stassiy
Narrated by: Natalie Bamford
Try for £0.00

The Gods of ancient Greece are among us. Hades, the king of the underworld hatches a heinous plan to crown himself the Supreme God - The God of Gods - he will kill billions of humans, packing his kingdom with their souls.

Aurora Port is just an ordinary human, or so she thinks. Her life is flipped upside down when her estranged father, and owner of a large conglomerate disappears, feared kidnapped.

A stunning adventure awaits. She has eight days to decipher her father’s messages, find a mystical key, and stop Hades from destroying mankind.

Aurora, with the help of Zeus, Hercules, and Iris must race against time to save the world and its inhabitants. Can she succeed? Is she ready for the secret her father kept from her?

You will not be able to put down this thrilling, modern day, fantasy story intertwined with Greek mythology, suspense, and fast paced action.

What listeners say about Keymaker's Daughter

Easy to keep track of characters on what was going on in the story because of the slow pace.

Keymaker's Daughter, written by Anya Stassiy, is an interesting urban fantasy with the gods of ancient Greece as the theme. A tad slow to start off but stick with it and you'll be rewarded with a story with heroes and heroines to root for as they try to save the world.

Aurora, daughter of a famous lock maker, is drawn into the scheming of the gods when her father mysteriously vanishes a week out from a major planetary alignment event. Brought into her father's world, things aren't quite as they seem, and Aurora soon discovers herself surrounded by gods of legend.

Hades, king of the underworld, it seems is hatching a plot to release the titans from their prison to conquer mankind and put the gods back on top.

Without knowing who to trust, and seemingly betrayed at every turn, Aurora must find a way to stop the titans from being released. Lots of interesting historical tidbits along the way, and a fun blending of the old and the new. Twists and turns along the way to keep you guessing who and what is going on.

The narration by Natalie Bamford was good, though a little on the slow side for my tastes. A quick tweak to the playback speed made it better suited for me. Plenty of distinctions between characters, and polished production free of any obvious issues to pull me out of the moment.

To sum up, Aurora is a worthy heroine to add to the pantheon. Move over Hercules, Aurora might just have you beat.

If you are a fan of Greek Mythology you will love this captivating urban fantasy by Anya Stassiy! This story was full of twists and turns and lovable characters and held my attention beginning to end. Natalie Bamford’s narration truly enhanced the story and brought all of the characters to life!