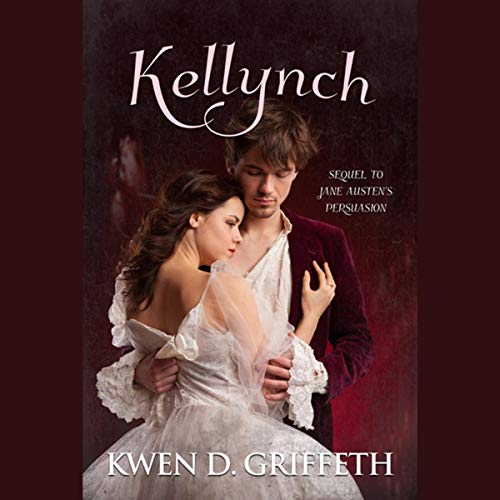 The story of Kellynch picks up three years after the couple married and were able to secure the Kellynch estate from Sir Walter when cousin William Elliot agreed to waive the entailment. It would seem all is well with the young couple, but all is not as it seems.

Kellynch is a story of deceit and treachery as well as courage and overcoming the odds. It is a story in which those who were assumed to be friends are not and where support comes from unexpected places. Love again will be tested in a story set against the backdrop of historical events.

Throughout the audiobook, I have remained true to the characters as Miss Austen created them. I sought to develop and introduce new characters that would meet with her approval.

What listeners say about Kellynch

I am struggling to connect with the narrator. I don’t think I can finish listening. Disappointing as Persuasion is my favourite.

An interesting interpretation of a classic

Kellynch is a sequel to Jane Austen's Regency romance novel, Persuasion. It has been several years since I read - or listened to - Persuasion, though I did watch the 2007 adaptation to familiarise myself with the characters. Perhaps this coloured my feeling that the book is written in the style of a modern adaptation rather than a contemporary sequel. (For example, the canal scene feels as if it has drawn its inspiration more from Colin Firth than Jane Austen.)

That is not necessarily a bad thing, for I adore many of the retellings of Austen's most famous stories, and I have enjoyed this one. I think it stands best if it is considered as 'Austen inspired' rather than an attempt to faithfully recreate her style. I would almost have preferred it had Griffeth changed the names of the characters and a few salient details and written it as a stand-alone Regency romance. The temptation to keep comparing it with the original will always leave any sequel wanting.

My favourite parts of the book were the unassuming, tender moments between Frederick and Ann, when her mischievousness met his reserve and the years of separation melted instantly away. At those times I glimpsed the young lovers they once were, and I felt that, there, the book was especially true to the spirit of Austen's original novel.

I also enjoyed the chapters set at sea. Griffeth has created an engaging and dynamic crew, and I enjoyed the insights into Frederick as a Captain and abolitionist. I would have liked the horrors of the slave ships to have been dealt with in greater detail. I felt that Frederick's character in these chapters remained congruent with Austen's vision of Wentworth as I remember it.

I did find it a little far-fetched at times, with certain plot points feeling a little too contrived, but that is a common pitfall of the genre.

Narrator Alexandra Jones' dedication to the story was evident, but I did feel that such young characters would have benefitted from a similarly youthful voice.

As I am familiar with the narration of books adapted by organisations like the RNIB and Calibre, I was not uncomfortable with the informal style of the recording - which almost felt as though Jones were sitting beside me and reading the book aloud. It was was definitely narrated rather than 'performed'. For listeners who are accustomed to more polished productions, it may be disconcerting to hear the little slips, stumbles, beeps, changes in volume, and especially the electronic interference between chapters 9 and 10 that would be edited out in a studio recording.

I would recommend it to fans of the period more than to fans of Persuasion, as I fear that the liberties it takes may not satisfy purists. If, however, you are simply happy to lose a few hours in more genteel times, and in the company of somewhat-familiar characters, then this book does not disappoint.

*I received this audiobook free of charge in exchange for an honest, unbiased review.

Awful. The story is discordant with the original Persuasion..the about face in characters unbelievable, the treatment of the horrors of slavery is shallow. The narrator has a good voice, but her style is unsuited to the material.

Though, it did not follow as well as persuasiom.
This,actually brought ,the family together .Sot
Anne ,test was. to stand ,straight,and strong.
Not lose faith in her husband..Who caught slave
smugglers. To save Kellyrinch, ..Anne is not persuaded to mistrust het .husbsnd .She petsuades
her family,to honor and respect her husband.
That includes sir Walter.Through the whole story
her. oldest,sister grow to. under stand , each other
Thus grow in friendship

OF course, we all know Jane Austen rocks! Wonderful author.
I found this "continuation" of the story very nicely done. While none of us can write like Jane, Kwen did a very decent and respectable job.
I very much enjoyed the story, and would definitely listen to/read more by the author, and narrator.

One need not have read the original Austen tale to enjoy this expansion on its theme. Marriage for love was then the exception to the rule and even now one need merely look at dynastic decisions more resembling mergers . . . (Lady D. may well have thought herself in love--or at least persuaded to be by a crown and fairytale title, but her groom?) The Captain and his bride are truly in love and, carefully capturing the sense and sensibility of the era, an idyll, as well as the estate, is explored in lovely prose. And then the serpent, a veritable Snydley Whiplash, appears. Canny at sea, the Captain has allowed his faith in family to blind him to the realities of the situation around him. Now the adventure starts. Pride and prejudice do play their parts (sorry, couldn't resist). Author Kwen Griffeth has a real feel for historic matter but his sensitive style and protrayal of the English countryside, manners, and mannerisms was a very pleasant surprise to me after enjoying his far grittier action in a western trilogy (which was also "sensitive" but in an utterly different style--complex character, our author!). Narrator Alexandra Jones reads delightfully, even doing the pirates justice. (And that is meant to pique your interest, not provide a spoiler.)

I thought the book needs editing. The are parts in the book where it just rambled on and slowed the book down. The narrator did not suit this audiobook in my opinion. I believe the combination together did not go down well. I was really looking forward to listening to this audiobook since I am a jane austin fan and I love reading adaptations to her books.
I will also have to admit that I did not finish listening to the whole audiobook.
This is not for me but others might like it more than I did.

Anne and Captain Wentworth are married and obtained Kellynch. A loving relationship that was delayed by years apart...which occurs again in the sequel.
Of course nothing flows smoothly for the couple, but luckily there is more faith in each other than others have in them.
If you enjoy history, historical storylines are enjoyable..jus not nitpicking each and every point. Sometimes it felt to ramble on a bit much..and it isn’t Austin, but a good representation of her work.
The narrator has a mature woman’s voice, a lovely accent that fits the story, but didn’t really propel the story or emotions as well as I may like.
Worth a listen..all depending on your expectations.

I had not read or listened to Jane Austen's Persuasion before although I had seen the movie. Therefore I chose to listen to Persuasion before attempting this sequel. I am really glad I did because it really helped to know who was who and what was going on. Not having lived in the early 1800's, I am not that familiar with class customs or distinctions from that time or place.
Having said all that, I did enjoy this novel. I found it to be a good continuation of the story that Jane Austen wrote in Persuasion. I did find a couple of points that I would really have trouble believing. Overall, this was a good story that could stand on its own merit as it only depends on Persuasion for the background and characters. This story does a good job of developing its characters into real believable people that you can relate to.

The narration was not the best on this one. Did not detract to much from the story so I would have to say it was acceptable. There were a couple of missed words or stumbles in reading but the accent was decent and the reading clear.