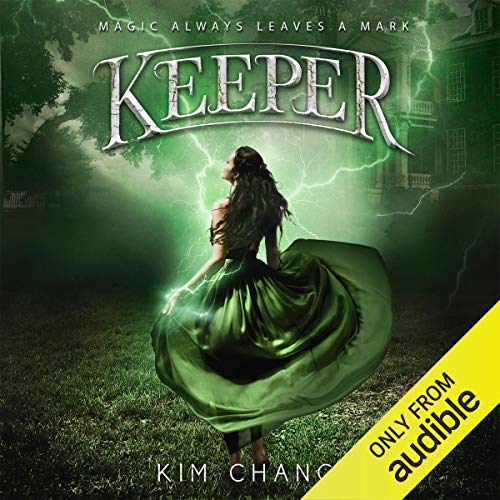 When a 200-year-old witch attacks her, 16-year-old bookworm Lainey Styles is determined to find a logical explanation. Even with the impossible staring her in the face, Lainey refuses to believe it - until she finds a photograph linking the witch to her dead mother.

After consulting a psychic, Lainey discovers that she, like her mother, is a Keeper: a witch with the exclusive ability to unlock and wield the Grimoire, a dangerous but powerful spell book. But there’s a problem. The Grimoire has been stolen by a malevolent warlock who is desperate for a spell locked inside it - a spell that would allow him to siphon away the world’s magic.

With the help of her comic-book-loving best friend and an enigmatic but admittedly handsome street fighter, Lainey must leave her life of college prep and studying behind to prepare for the biggest test of all: stealing back the book.

It leaves you wanting more

Very enjoyable and easy read. You want to know who is good and who is not so, leave you with lots of questions. You just have to start "Seeker".

Kim Chance’s debut novel is an overall good read, bringing an interesting take on the paranormal and witch genre. Although the book was written well, the story itself did fall into many scenes and character tropes that had been written many times in the YA supernatural genre. Lainey and Ty were definitely characters I had seen many times before - the not-like-other-girls bookworm who isn’t a damsel (although she’s been in many life threatening situations through her own actions) but refuses to accept the truth until much, much too late and the misunderstood gorgeous bad boy who gets into many fights and yet is surprisingly well read. Yeah, these two were definitely archetype of insta love, which is personally one of my pet peeves in fiction and I just couldn’t invest into this relationship - they were already on a romantic footing on their first meeting, which made the love story seem less authentic. Maggie, the best friend and third main character was the only character I was really invested in and I am looking forward to reading her perspective in the sequel.

However, the quality of Chance’s writing cannot be disputed and she’s penned a strong debut that readers who enjoy this genre will appreciate. The book definitely got stronger as the story progressed and for that reason, I am looking forward to reading Seeker. Katie Schorr's narration was good for this book and her performance really brought the story to life.