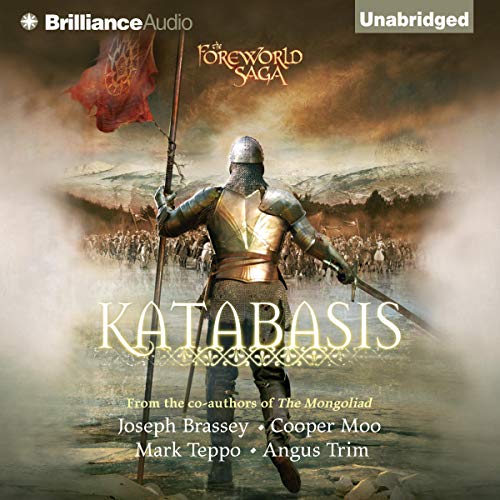 With the death of the fearsome Ögedei Khan, the Mongol invasion of the West has been brought to an abrupt halt. The defenders, a band of brave warrior monks known as the Shield-Brethren, limp homeward again across a frozen, bloodied wasteland. But where - and what - is "home" now that the threat of invasion no longer shapes their lives?

Thirteenth-century Europe has been saved from annihilation at the hands of the Mongols, to be sure, but new and terrible threats are at hand: political and religious turmoil threaten to turn the warriors' world upside down once more. Painted against a rich backdrop of medieval mysticism and Russian folklore, Katabasis weaves together the tales of victor and victim alike in a fearless exploration of what it means not just to survive, but to truly live again.

Great performance of a great story

This is an excellent performance of a great story - great in any possible sense of the word, even though book 4, the Katabasis, has fewer active plotlines compared to the previous three volumes.

Excellent!! Just as good as the previous books

What a great story, which carries on from the previous books. The narrator does a great job with reading this book, unfortunately the next book is not read by him :-(

So good! A great continuation of the previous books

Loved it! As Someone who knows about Russian history and culture, this was a real treat! Recommend!

good but not as well written at the Mongaloid

This Review Needs a Title...

I could not get into book 1, DNF (did not finish), so book three, which was ordered at the same time also gets flushed. Note to self, don't order all the books in a series, if you don't know that you might enjoy it.