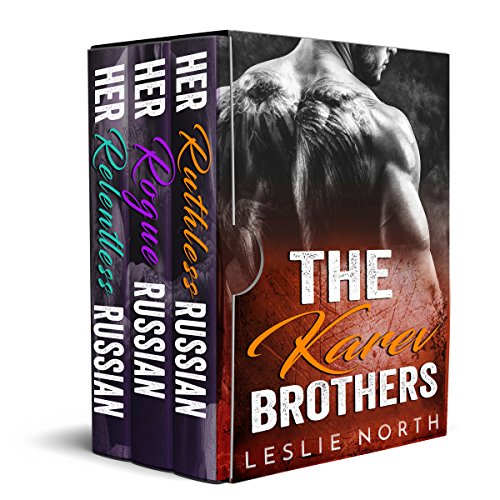 Born into a Russian Mafia family, Vlad Karev is no stranger to violence ...but this time it's personal. Someone has murdered his father and Vlad can't rest until he finds the killer. When the trail leads to an art gallery, Vlad wants to dig deeper, but he needs help from the owner's daughter. The pretty redhead is far too innocent for a man like Vlad, but he'll do what it takes to get the information he needs. His obligations are to the family, even if that means using the fiery woman.

Madison O'Connor works hard to keep her family's gallery going, although secretly she has little interest in art. But when she discovers her father's been laundering money for the Russian Mafia, she'll do everything she can to keep him out of jail. She hates to lie, but she has a plan ...seduce the Russian bad boy to learn the mob's secrets. Never mind his dangerous exterior or icy blue eyes, Madison's going to get her family free of the mob, even if she has to use Vlad Karev to do it.

As the killer gets closer, so do Vlad and Madison. But is their connection just the means to an end, or could their romance be real?

What listeners say about Karev Brothers: The Complete Series

I got this boxset and was not disappointed! Great story, great narrator, great sex scenes and great value. I guessed who the murderer was before book 3 but I enjoyed the inclusion of a mystery with the romance. I would recommend!

Wow! These three books are amazing, it’s been a fantastic story all the way through, and all three men are sexy as hell.
I thought the plot was fantastic, even if I guessed right from the first book who the bad guy was!
The narrator was wonderful, I really enjoyed his voice as both man and woman, he told the story really well and was a joy to listen to.

These books have lots of steamy scenes that went well with what was going on. I love that all three women were strong on their own but when put together with these men they were even stronger.

I enjoyed listening to the series in one go. Each story had a couple that despite being different and coming from different worlds, thrown together by circumstance, they meshed really well, sparks flying. The stories are short, but fun, suspense with a dash of romance and a few steamy scenes make for an entertaining listen. In the last one the truth behind their father's murder is revealed, what a twist. Each couple's story ends in HFN (Happy For Now) and would have been nice to get a glimpse into the future and see where they are.

My first listen from Mr. Cole and I really enjoyed the array of voices and accents, the passion for his craft really shows. I am looking forward to discover more of his work. My fave voice was the one he gave Vlad *sigh*

I have decided to start my review with D.C. Cole because in my opinion he was the best thing about this collection. He makes the male voices sound strong and sexy, and also does a good job with the female voices, making everyone sound different enough that you can always tell who is speaking. I could listen to him narrate anything at anytime! The stories themselves were all interesting. Her Ruthless Russian, Vlad and Madison’s story, was my favorite. I really liked both characters and the storyline kept me interested throughout. In Her Rogue Russian, I just couldn’t connect with Savannah. I didn’t really like her at all. I did like Maxim however but thought he deserved a better partner. Their story was still interesting it was just spoiled a bit because Savannah was so unlikable. Her Relentless Russian finally gave us the identity of the father’s killer. Dimitri and Harper worked together to solve the mystery and got their HEA. Harper took awhile to grow on me but Dimitri was a sweetheart and I just couldn’t help but like him. All in all each story was enjoyable and D.C. Cole certainly brought the stories to life expertly. This book was given to me for free and I provided this unbiased review.

This box set follow the three Karev brothers in their quest to find their father's murderer. The brothers also find love. Each brother had a different dynamic with their love interests but they were all interesting and fun. D.C. Cole did an excellent job narrating all the characters.

This is a complete series with stories of 3 brothers from a Russian Family. It has a style of Mafia life so there is old school ways of she is mine caveman style. Fans of that type will love this as I do. The stories was not all hot times but had a storyline that ties each story together to end with all the answers resolved by he end of the last book. I really loved this whole series. SC Cole did a great job!

I was given this free review copy audiobook at my request and have voluntarily left this review.
AudiobookObsession
AudiobooksUnleashed

Riveting From Beginning to End

Absolutely loved it. She has been one of my favorite authors for years now. Couldn't put it down

In this Mafia Series we follow three brothers, Vlade, Maxim and Dmitry in their quest to find their father's murderer. This Series is well written, suspenseful, fast-paced, sexy/steamy and filled with twists and turns. The main characters in each story (Vlad/Madison, Maxim/Savannah and Dmitry/Harper) share a strong chemistry. I loved their HEA and liked the ending of this Series. I like that the women in Leslie North's books are mostly strong and sometimes sassy and the men are always alpha and protective.The narration was really great, as always with DC Cole. He has done a great job with all characters. He's one of my favorite narrators. He has the perfect sexy voice for this mafia Series. I enjoyed my listening. I received this free review copy audiobook at my request and I have voluntarily left this review.

I love a good mafia story and this one didnt let me down. This story of three Russian brothers investigating their fathers murder didn't pack a whole lot of punch but it does hold your attention till the end. DC cole is amazing and he brings life to this series!

And the gentleman reading had a great voice. I'll actually look for others he has done.