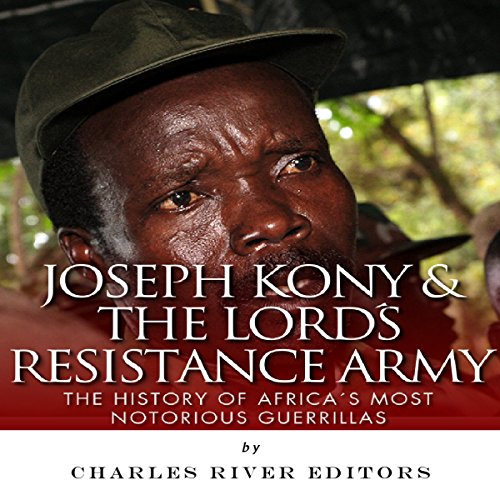 By: Charles River Editors
Narrated by: Dennis Logan
Try for £0.00

The Lord's Resistance Army appeared on the conflict landscape of Central Africa at the dawn of perhaps one of the bleakest period of post-independence African history: the 1980s and 1990s. This was the era of Afro-pessimism, during which the proliferation of war and crisis in Africa appeared simply overwhelming. It was during this period that the continent began to feel the full weight of the AIDS crisis, which was exacerbated by economic stagnation, continent-wide corruption, poor governance, the highest levels of unemployment since decolonization, and apparently unsolvable conflicts in regions as diverse as Ethiopia, Mozambique, Angola, Western Sahara, Liberia, Sierra Leone, Somalia, and of course that region of perennial instability, the Great Lakes region of central Africa.

Here a complex mix of colonial legacy, ethnic incompatibility, isolation, and lawlessness has combined in the years since independence to create a theatre of ongoing political unrest. Indeed, it was this region that saw perhaps one of the most iconic episodes of the 1990s, the Rwandan Genocide, the ramifications of which have included two major wars fought within the Congo, deadly ethnic equalization throughout the region, knock-on wars in Uganda and Central African Republic and an ongoing see-saw balance of power in an extremely volatile region.

Another similar region of ongoing instability that factors into this subject has been the broad axis that includes South Sudan, northern Uganda, northern Democratic Republic of Congo (DRC), southern Chad and the Central African Republic (CAR). The engine of conflict in this broad region, in particular in western and southern Sudan, has been the fundamental incompatibility of the largely Islamic north and the black Christian/animist south.

What listeners say about Joseph Kony & The Lord's Resistance Army

Hardly a complete history of Joseph Kony and the LRA. This books leaves out a LOT of information.