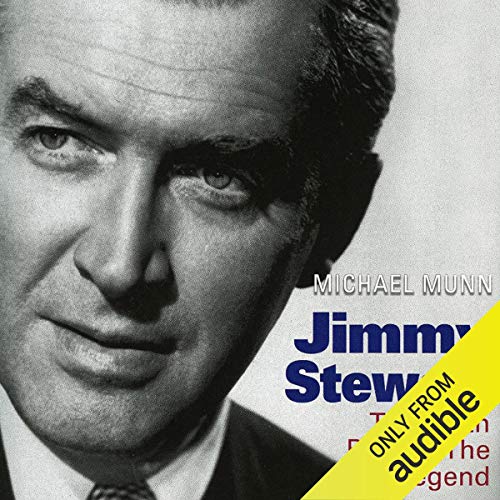 By: Michael Munn
Narrated by: Mark Whitten
Try for £0.00

Fans of classic Hollywood, take heed: In Jimmy Stewart: The Truth Behind the Legend, Michael Munn has engineered a fascinating glimpse into the hitherto clouded public and private lives of one of the most famous figures in film history.

Performed with great energy by actor Mark Whitten, this comprehensive biography provides keen insights into the man behind the mask, emphasizing the differences and similarities between Stewart’s assumed public persona and his private self, delving deeply into his patriotism and FBI service alongside his relationships and rage issues.

In this definitive biography of one of Hollywood's most beloved stars, Michael Munn reveals the truth behind the diffident, earnest and kindly persona of Jimmy Stewart. Drawn from the author's formal interviews and informal meetings with the star and his friendship with Stewart's wife, Gloria, is this portrait of a man who came from the Presbyterian traditions of Pennsylvania to become one of the silver screen's enduring legends.

An openly right-wing Conservative and super-patriot, Stewart worked for the FBI at the behest of J. Edgar Hoover, directing his undercover sleuthing to crack organised crime in Hollywood. But he was unscrupulously manipulated by the president into flushing out Communists from the film industry. Among these revelations, there are also tales of heady love affairs, hookers and hoodlums, and of Stewart's run-in with the most dangerous of all gangsters, Benjamin 'Bugsy' Sigal. Accusations of racism are explored, as is Stewart's notoriously volatile temper. There is a comprehensive account of his experiences as a colonel in the US Air Force in World War Two - and, of course, there are the films: It's a Wonderful Life, The Greatest Show on Earth, Rear Window, the westerns and his Academy Awards.

What listeners say about Jimmy Stewart

This is an excellent book. I listened to it in a week of long, dark early morning runs through the countryside and it's gripping from beginning to end. The reading is superb and some of the best I've heard on any audio book and the book itself is perfectly balanced and never long winded. Clearly it helps if you like James Stewart though I don't think it's essential as the biography brings in so many other interesting famous and non famous people and also describes war time and the politics of Hollywood and indeed the USA so well that anyone interested in 20th century Popular culture would enjoy this.

If you could sum up Jimmy Stewart in three words, what would they be?

Have you listened to any of Mark Whitten’s other performances? How does this one compare?

As a fan of James Stewart I found the book fascinating and found him even more endearing.

Naturally if you don't like James Stewart ( could there be anyone ?) you're not going to enjoy this, but if you love him you'll find it a great listening experience, informative and entertaining.

With Jimmy Stewart what you see is mostly what. This book is from conversations and interviews with Jimmy ( himself ), his wife, family and friends. The thing that soon becomes apparent is that Jimmy is a man who is liked by most of the people he met. This is definitely a read again, and one I recommend and hope you enjoy the book as much as I have.

What a fascinating read, I loved this book and didn’t realise how much of a ladies man he was. My favourite movie of his is a wonderful life. Can’t beat it. Brilliant story

My heart is broken.

Too much waffle about the author and devastatingly news about Jimmy Stewart's political views.The author wisely says that the fan should not think they know the star from his roles.

very interesting and insightful book that was a pleasure to listen to. balanced account of the stars life beliefs etc ..who would have thought Stewart was involved with the FBI

Great story telling at its best. Highly recommended
Just goes to show whats on screen is not the person you think they are.

Enjoyed from start to finish

Have always liked Jimmy Stewart as a film star and found this to be an enjoyable story of his life . Had some interesting stories and gave an insight into the person behind the camera

An excellent depiction of Jimmy Stewart

A hallmark of a nonfiction book or a biography is that it reads like fiction. This wonderful portrayal of actor Jimmy Stewart reads as if it was the fictional account of his life. The story is intimate. I could not stop reading it every minute I could spare. And, the narration was near perfect I highly recommend this book!

Anyone who has ever loved any Jimmy Stewart movie will love this book even if you think you've heard it all before. It is an excellent story because of its excellent chronology.

The only thing I didn't like about this book, and I'm beginning to hear it in more and more audibles narrated by men, is their need to talk in a woman's voice when narrating women's quotes. What is with that? I find it very grating and frustratingly insulting. First they tell you "she said" or the character's or woman's name, then they proceed to try to talk like a female. Is that truly necessary? To me it's almost as annoying as fingernails down a chalkboard and that it takes away from the narration and storyline. I have listened to several women narrators and find they do not do this.

However, with this book, I found the subject matter so wonderful and interesting that I could get passed it. DO NOT MISS THIS BOOK FOR THAT ISSUE. You may find that you'll regret it later.

If you could sum up Jimmy Stewart in three words, what would they be?

He kept my attention

I always enjoyed Stewarts skills. The book helped me get to know the person. I have found few actors I enjoyed more over the years.

Munn's research and telling are excellent and Whitten's narration is superb. Highly recommended and absolutely required for any fan of Jimmy Stewart's.

Great Biography to listen to

Really enjoyed this book. I’ve always loved Jimmy Stewart in pretty much anything he did. The only negative I found in this book was the fact that the narrator mispronounced so many names of the actors who populated Jimmy’s life. He attempted to speak a bit like Jimmy in the quotations, but it took him nearly the entire book to finally start sounding like him. Other than that, the book was a great listen. The narrator simply needed a bit of pre-recording research to learn how people and places are pronounced. It got irritating after a while, especially for someone raised in Southern California and whose mother and aunts came to CA to be involved in the movie business. Anyone who watches old movies on TCM even just once in a while knows how these names and places are pronounced. The narrator needs to do his research before he starts recording.

I found this book to be interesting and informative. The stories within this book gave me a new insight into the life of Jimmy Stewart.

I’ve always been a fan of James Stewart. As I left for work this morning I saw that Classic movie channel was airing his movies all day. I almost called off sick but my wife would have had my hide. This book gave me a great insight on who this great man was.

Jimmie Stewart always seemed like a fairly decent and normal person. Overall, based upon this book, he was.

The only thing that kept distracting me was the mispronunciation of the names of som well known stars. Hmmm. Besides that, the narration was good.

Well worth the read.

I've always been a Jimmy Stewart fan and was eager to listen to this book. It was worth the listen, as it covers his life, from early years to his death. It was written by a friend who doesn't gloss over his moods.

I really enjoyed the book and loved the stories about the movies and actors too!