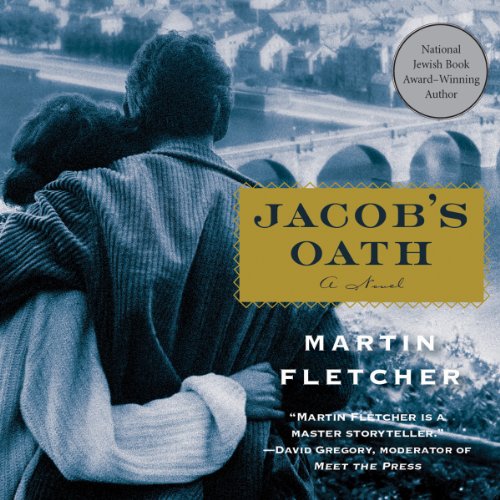 Martin Fletcher's Jacob's Oath is a heart-wrenching and heart-warming thriller about the consequences of revenge that will be a huge word-of-mouth and book club favorite.

As World War II winds to a close, Europe's roads are clogged with 20 million exhausted refugees walking home. Among them are Jacob and Sarah, lonely Holocaust survivors who meet in Heidelberg. But Jacob is consumed with hatred and cannot rest until he has killed his brother's murderer, a concentration camp guard nicknamed "The Rat". Now he must choose between revenge and love, between avenging the past and building a future.

Martin Fletcher, who won the National Jewish Book Award for Walking Israel, proved his chops as a novelist with The List, which was selected as the One Book, One Jewish Community title for the city of Philadelphia. Now, Fletcher brings us another touching novel of love, loyalty, and loss, set in the aftermath of the Holocaust.

"Revenge is at the center of this brilliant and probing audiobook, and George Guidall's performance is captivating.... Guidall recognizes the delicate balance needed to bring this complex and emotional story to audio." ( AudioFile)

I have read a number of books pertaining to the holocaust. This one was especially poignant, and featured a girl, Sarah, who was not interred in a concentration camp but endured the entire war in Berlin as a "submarine", a Jew hiding at the mercy of kind Germans, and Jacob, a young man who had been an inmate at Bergen Belsen Concentration camp. Jacob has made an oath to his deceased brother, with whom he suffered the atrocities in the camp. As he meets Sarah, he must grapple with a very difficult decision... should he fulfill the oath he made to his brother and risk losing Sarah? Can he live with the consequences, should he in fact keep that oath? A very good listen, made even better by the masterful George Guidall.

The best love story ever

The voice of G.Guidall makes not only hear the words but feel the breathes of the characters in this book

If you are, like me, obsessed with what happened in the middle of the twentieth century, you will follow me into this world with fascination and horror. Clearly a time that I just can't understand, no matter how many of these books I read.

Having read many WWII stories, it was interesting to read (hear) one from the perspective of "what happens now?" after the liberation of the camps. What do/did Jews who survived go home to? Where did they go? What was it like to try to pick up one's life after such horrors?

The central moral question of the book was interesting: to choose the past or the future.

The writing is OK - not very poetic, but it told the story nicely.

I really, really liked the performance. The narrator's German pronunciation was perfect - anything less would have ruined the story for me.

I recommend this if you are interested in Germany, WWII and historical fiction in general.

Tremendous strength of courage but heard it before

The characters are very courageous. The story spans a few very difficult years and a lot of geography. I was hoping for a little more but in the end seemed much of the same compared to others media of this genre.

Spoiler Alert: I liked the parts when the Jews got back at the Nazis.