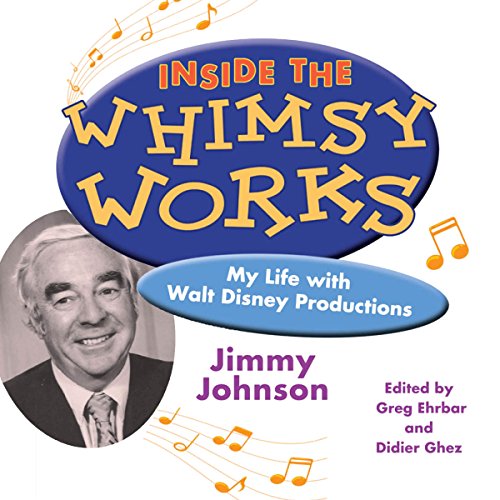 Inside the Whimsy Works

Inside the Whimsy Works

In this never-before-published memoir from the files of The Walt Disney Archives, Disney Legend Jimmy Johnson (1917-1976) takes you from his beginnings as a studio gofer during the days of Snow White and the Seven Dwarfs to the opening of Walt Disney World Resort. Johnson relates dozens of personal anecdotes with famous celebrities, beloved artists, and, of course, Walt and Roy Disney.

This audiobook, also the story of how an empire-within-an-empire is born and nurtured, traces Johnson's innovations in merchandising, publishing, and direct marketing, to the formation of what is now Walt Disney Records. This fascinating autobiography explains how the records helped determine the course of Disney Theme Parks, television, and film through best-selling recordings by icons such as Annette Funicello, Fess Parker, Julie Andrews, Louis Armstrong, and Leopold Stokowski and the Philadelphia Orchestra.

Through Jimmy Johnson's remarkable journey, the film, TV, and recording industries grow up together as changes in tastes and technologies shape the world, while the legacy of Disney is developed as well as carefully sustained for the generations who cherish its stories, characters, and music.

The book is published by the University Press of Mississippi.

"...offers new and surprising perspectives on the era when Walt and his brother Roy ran The Walt Disney Company." (Jim Korkis, Disney historian and author of The Vault of Walt)

Would you consider the audio edition of Inside the Whimsy Works to be better than the print version?

I really enjoyed this book. One of the best I've read about Disney. Great to hear the stories from another point of view

Fantastic overview of Disney in the 20th Century

What made the experience of listening to Inside the Whimsy Works the most enjoyable?

Fantastic overview of Disney in the 20th Century from a personal perspective of one manager.