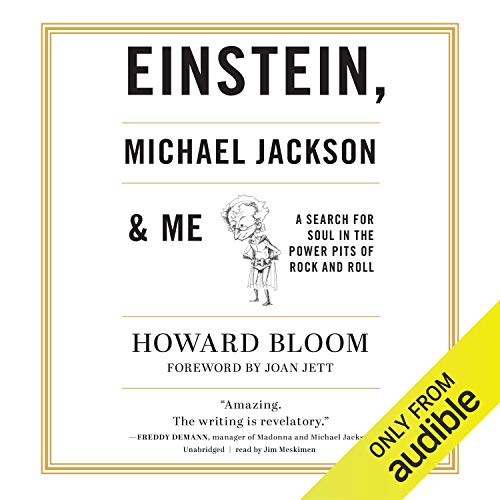 A Search for Soul in the Power Pits of Rock and Roll
By: Howard Bloom
Narrated by: Jim Meskimen
Length: 17 hrs and 2 mins
Categories: Arts & Entertainment, Music
5.0 out of 5 stars 5.0 (1 rating)

What was he after? He was on a hunt for the gods inside of you and me. Einstein, Michael Jackson & Me is Bloom’s story - the strange tale of a scientific expedition into the dark underbelly of science and fame where new myths and movements are made.

What listeners say about Einstein, Michael Jackson & Me

The author I met while walking my dog

As you stroll around the park walking your dog, you see people among you enjoying the splendor of the park as well. A casual nod to someone as they pet your dog turns into a fascinating encounter. This amiable man clad all in black was a tender, soft spoken gentleman who I exchanged pleasantries with. I do the obligatory inquiry on what he does for a living. What I found out was a life of star studded encounters in the music industry and his role as shaman in making those musical legends. Not only did I have the privilege of reading his exploits, I can continue learning the intrigues of his life by simply putting a leash on my dog and proceed to the park. A life, a fascinating read.