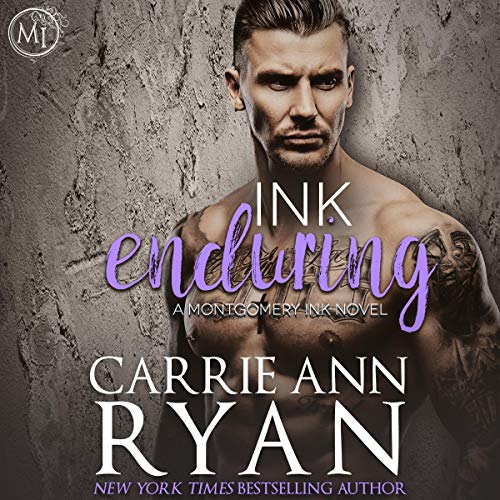 By: Carrie Ann Ryan
Narrated by: Gregory Salinas
Try for £0.00

The Montgomery Ink series continues with a forbidden love between three friends and a past that they can't escape.

Jake Gallagher knew from the moment he saw Maya that she was the one for him - it had the same breath-taking intensity as when he'd first set eyes on Border. Only life never turns out the way one plans, and now he's falling for someone else, or at least he thinks he is.

Maya Montgomery never should have looked past the friendship she already had. Now that she has, she can't stop thinking about Jake and what he means to her. When a mysterious stranger from Jake's past shows up at their door, she's forced to admit that if she doesn't take the risk of a lifetime, she'll regret it for the rest of her days.

Border Gentry walked away without a second glance once because of what could happen if he let go, but now he's back and ready to see what he's missed. He's been on the road a long time and has seen things no man should ever see, yet once he rediscovers the broody Jake and meets the inked and fierce Maya, they're like a balm to his soul and he realizes what path his future should take.

It will take more than sizzling chemistry and a heat that never dies for the three of them to overcome their pasts. And when someone from the outside wants to stand in their way, it's not only their hearts on the line but also their lives.

What listeners say about Ink Enduring

This was just pure perfection, the characters, their individual relationships and their relationship as a whole and the amount of drama. There was the added bonus of a little humour and a lot of heat and chemistry that just put this one over the top as an amazing book.

Loved this book and the narrator so very much.

Maya, Jake, Border
I love this series! I love the characters and their family dynamics. This is a MMF friends to lovers awesome book. So much happens, I didn’t want to stop listening. We get a HEA with no cliffhanger.

love all three of these

What made the experience of listening to Ink Enduring the most enjoyable?

there is always a little action in the Montgomery stories

What was one of the most memorable moments of Ink Enduring?

Maya with all her pregnancy tests

Maya & Jake finally get together

love me some Montgomery stories

Carrie Ann Ryan! Wow! Just Wow! Every time I read the next story in this series, I think “it cannot get any better!” However you surprise me each time! Thanks so much for your creativity!

It had potential but fell short.

I love this series, but this book fell short of expectations. The narrator was good as always, but even his deep voice sounded whiney when reading the dialogue. These are supposed to be adults close to 30 years old and they sounded like angst ridden teenagers.

The plot also had a lot of potential, but it was never fully realized. It seemed like the author was tired and threw some words on the page to wrap this one up as quickly as possible. So disappointing.

i think this triads story is amazing. it is written well. and it is narrated beautifully.

Too much repetition, ya get me? He's/she's my best friend! What were they thinkin? She's Maya fucking Montgomery!

I like the characters in the Montgomery Ink series. Each of their storylines start out intriguing and makes me want to know how they end. This is what keeps me listening, not how good the books are in the series. The books are OK.

Each book seems to end up the same way. Some type of traumatic occurrence that starts and ends so fast you could miss it. The seemingly strong heroine ends up being insecure and needy. It is almost like the character morphs into another person. The strong, tough hero does the same thing.

Whatever the trauma or tragedy is for each couple, the pattern doesn't change much. I was really expecting more from the triad, but that was disappointing too. I was really hoping for more. Even the narration ends up being somewhat bland. I don't understand why the story falls off from being interesting.

I still plan to finish finding out what happens with the other Denver Montgomery siblings. I also still recommend people read or listen to them and judge for themselves.

I loved this story and the characters and their interactions. Gregory Salines is stellar as the narrator.

This book was awesome! It is an mmf story, which is exactly what Maya needed!