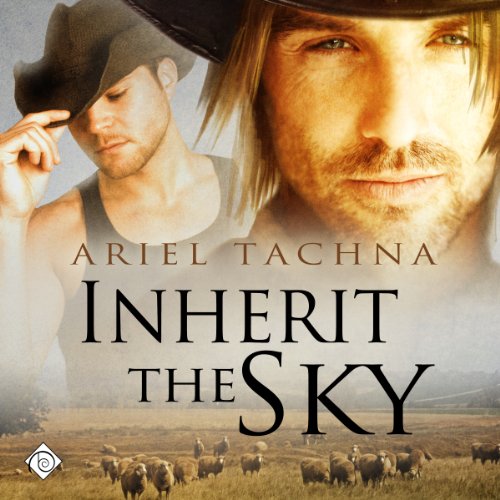 Caine Neiheisel is stuck in a dead-end job at the end of a dead-end relationship when the chance of a lifetime falls in his lap. His mother inherits her uncle’s sheep station in New South Wales, Australia, and Caine sees it as the opportunity to start over, out on the range where his stutter won’t hold him back and his willingness to work will surely make up for his lack of knowledge.

Unfortunately, Macklin Armstrong, the foreman of Lang Downs who should be Caine’s biggest ally, alternates between being cool and downright dismissive, and the other hands are more amused by Caine’s American accent than they are moved by his plight…until they find out he’s gay and their amusement turns to scorn. It will take all of Caine’s determination - and an act of cruel sabotage by a hostile neighbor - to bring the men of Lang Downs together and give Caine and Macklin a chance at love.

What listeners say about Inherit the Sky

loved it, it was a great audio of a brilliant book, looking forward to the next one.

If you could sum up Inherit the Sky in three words, what would they be?

It surprise me that a story primarily located in Australia with Australian casts (except 1 MC) have an American narrator and not Australian. Why is that?

If you could sum up Inherit the Sky in three words, what would they be?

It surprise me that a story primarily located in Australia with Australian casts (except 1 MC) have an American narrator and not Australian. Why is that?

Bonzer story, but hearing an American try to narrate Aussie dialogue is both painful and hilarious. I was puzzled for ages over what a gulla might be. Galah, a very stupid bird even by bird standards, is pronounced galaaaaah. And it's DRYzabone as in dry as a bone, not drizzabone. And way too many other jarring mispronunciations.

Couldn't they at least have hired someone who's spoken to an Aussie once or twice....

Love in the Outback

I really enjoyed this book. I think the narrator does a great job and the story is engaging. A transplanted American finds love with a seasoned foreman of a sheep station in the Australian outback. What's not to love? I listened to this in 48 hours, it was that engaging. Definitely worth a credit. On to Book 2.

A previous reviewer didn't care for the Aussie accents much. I loved 'em! They sounded authentic, added much to the story and even with occasional slip up, Dry-as-a-bone, not Dizzabone, deserve 5 stars! Looking forward to the next instalment of the series. Spend your money (or credits) on this one.

Promising start to a series

What did you love best about Inherit the Sky?

The fact that Cain is unashamed of what he is, and isn't afraid to demand the same of a lover if they're going to be together.

What other book might you compare Inherit the Sky to and why?

Love, Like Water by Rowan Speedwell. They both involve hardworking, rugged, farmer-style men who take an outsider under their wing, and into their hearts.

Which character – as performed by William James – was your favorite?

Macklin - I think even native Australians would agree that James does him justice as far as the accent goes.

When Macklin almost loses Cain and that helps him put things in perspective and overcome his fear of being 'out.'

Not the most convincing relationship! I found both MCs more annoying than endearing. Unfortunately as a fan of Red Dirt Heart, Inherit the Sky is poor similarity

I absolutely loved the spectacular narrative v to got along with a beautiful love story.

Hot Adventures Down Under

This is one amazing story!!! The guy doing the Australian accents reminds me of Paul Hogan!!! Damn Sexy to say the least. I especially love the Humor that peppers throughout the Story. Now if you're sexually frustraited Then don't listen. You'll get too involved in the story if that's the case. But if you're wanting to be swept away in entertainment sake then this is for you. This Series and The Timing and the About Time series' by Mary Calmes and the First and Forever Series by Alexa Land are just as good if you want to laugh so hard in parts that you piss yourselves.

This was a bit of a fairy tale, and was nicely constructed. The setting made me a little homesick for my growing up in the middle of nowhere days. (Just not enough to ever give up high speed internet.)

The characters are fun to get to know, and I look forward to seeing how they develop in the following books.

Caine Neiheisel's life is going nowhere, he's stuck. So when his mother inherits a ranch in the outback’s of Australia he sees this as a chance to start over. Said and done, he quits his job, his boyfriend, packs up and sells his things and moves across the world for a fresh start. Only problem is, he's never set foot on a ranch in his entire life and has no clue what it takes to run a ranch like Lang Downs. And the welcome he gets from the farmhands and the foreman is less than enthusiastic. But Caine is determined to win them over no matter what.

Macklin Armstrong is the foreman on Lang Downs and has been for years. The ranch is the only home he knows and the people there has been his family for the past twenty years. So when the ranch is willed away, and to a yank at that, he is anything but happy and dreads the things to come. Because how can a man with no clue what ranch life is all about have a speck of a chance in running it? He dreads the downfall of his home. What he gets is an out and hard to resist man, eager to learn and listen – for the most part.

I’m a fan of western themed books; give me a cowboy any day. Their world is so far from my own reality and I have to say that I admire what it takes to run a ranch. I mean the skill sets alone is a mile long, add in isolation from everything, that all they have are each other, the equipment they have on site and my mind is blown away. I do know that this is fiction, but men like Caine and Macklin do exist in the world, and I can only say that I’m in awe.

Let’s address the elephant in the room. This book reminds me so much of the Red Dirt Heart series by N.R. Walker. We have the American newcomer, the closeted owner/foreman, the accidents. It's basically the same set up with different people in a different location. A definite déjà-vu. Then again, this book was written two years prior to Walker's series, so technically it should be the other way around. On the other hand I do like the set up and plot line in general and didn't mind the similarities that much. What I did mind was that there was this shallow feel to this story, it lacked depth. It was a miss-match of events taking place but I still lacked that sense of place and connection.

There were a few things that didn't sit well with me in this book, and that was mainly Caine. I hated that he was basically forcing Macklin to come out and be open about their relationship, about being gay. The manipulations, the guilt tripping. It didn't sit well with me - especially that early in their relationship - there barely was one! And that's another thing that I had a problem with, the relationship between them moved at lightning speed. From a kiss to relationship in no time at all. It was too much too soon and felt forced and off to me. It kept me from enjoying the book as much as I would have liked.

Now I *think* William James is a new to me narrator – might have to go look it up later, and it’s not without wariness that I pick up new narrators. This time it paid off – and big time. I love the accents James had for the characters, especially the Aussie one. Now being a non-native English speaker I can't speak to its authenticity, but to me it sounded real. I was enjoying the heck out of it and kept wanting Macklin to say more so that I could bask in it for just a while longer. My personal favourite though – he narrated with feeling. A definite win for me.

Recommended for the audio, the story left a few things to be desired.

These characters, this story, the romance... just gorgeous. And the sex scenes were incredible.

I'm completely blown away by the performance of William James, the narrator. I've never come across anyone who can do both a convincing American and Aussie accent in the same breath. He was amazing.

Thank goodness I've already got the next in the series purchased from Audible.