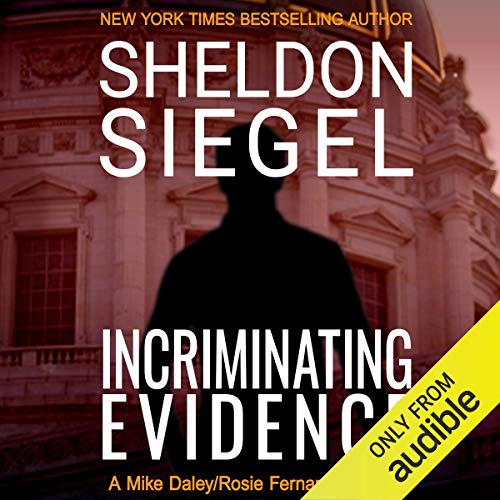 With his first novel, Special Circumstances, Sheldon Siegel delivered legal fiction so exciting, it drew comparisons with the very top tier of courtroom thrillers. Now he has a new challenge for defense attorney Mike Daley - ex-priest, ex-husband, ex-public defender - and it's a high-profile zinger: a case he doesn't think he can win for a client he can't stand.

It starts with a phone call Mike Daley never expected, from District Attorney Prentice Marshall Gates III, San Francisco's chief law enforcement officer and front-runner candidate for California attorney general. Friends they're not, but Gates needs Daley now - badly. He's just been arrested. A couple of hours earlier he woke up in his hotel room and found the dead body of a young male prostitute in the bed. Prosecutors are already talking the death penalty, and there's nothing in the mounting evidence to convince Daley and his partner - and ex-wife - Rosie of Gates' innocence. But even if he's lying, it's their job to defend him. Sure enough, the deeper Mike and Rosie dig, the seamier their findings. From a shady Internet entrepreneur who trades flesh for cash to a prominent businessman who uses muscle to keep his enterprise prospering, Mike and Rosie chase down leads that take them from the depths of the Mission District, where drugs and bodies are always for sale, to the gated mansions of Pacific Heights, frantically trying to piece together the shocking truth of what actually happened, even as the trial itself is under way.

What listeners say about Incriminating Evidence

Is this a waste of time and money

If you have listened to book 1 you have already listened to book 2 in the series. Did the author copy and paste this offering. How did the publisher sanction this.
If you read it as a stand alone it’s ok but not as a second in a series.

I enjoyed the story and the narration was good. i would listen to more from this author.

not as good as the first book. hoping for better with the next one. I'll persevere.

Formulaic to the max

I listened to book one and enjoyed it so I bought book two. The characters were slightly different but the legal procedural was identical to book one. I could predict almost everything and there were only slight school differences.

Exact copy of his first novel!

I loved the first book in this series, but this second book is like a near-exact copy of the first book with names changed and only a slightly different plot. I like an author that sticks to his or her niche formula, but even the characters were basically duplicated and every cliche was reused. The characters are great, but yikes, each book even had a similar female celebrity personality that was six feet tall and had the same plastic surgery! Now I'm hesitant to get the third book. Did the author think I wouldn't remember the first book ?

Is it still PLAGERISM if you copy yourself?

What would have made Incriminating Evidence better?

If I hadn't read book 1 (Special Circumstances) first and thereby had no idea this was a cut and paste.

He was Mildly annoying. Every female came equipped with a quivering "...I'm about to cry" voice.. Even the strong ones. The "posh" voices were only a step off that. It just became a bit much, and considering he had book 1 to go by, you'd think it would have been easy.

OK, so seriously, is it plagiarism if the work that you are copying from is your own? Probably not since it is after all, with your permission.
This book is so exact, that I swear, I may buy both print copies in Kindle just to see how many lines are precise duplicates (verses just near misses).
Start with plot. In both books a limited cast of characters are the suspects because the murder occurs in a locked room (book 1 the law office and book 2 a hotel room) where the law partner (or in this case former partner) are accused with incontrovertible evidence.
In both books, our hero(s) defense attorney, Mike Daily, is hired to defend the accused who repeatedly and needlessly lies about the events (many times the same lies) causing the defense to be impossible. In both, the accused intentionally contaminates the crime scene with his fingerprints in full view of witnesses during the discovery of the body (book 1 safeing the firearm book 2 rendering 1st aid).
It is impossible to list all of the identical dialog, circumstances, and twists, but I can say I have never read another book where the author copied himself and merely changed names and places to protect the innocent (or in this case a blind and deaf person from noticing his copying of previously original ideas). Even things like the hired gun of a pathologist who tells the jury from the witness stand "... I like Dr. [so and so] he's a good medical examiner, I admire him but here, I think he got it wrong, dead wrong" I swear I am sure there was cutting and pasting.
In the end, I became so consumed with (and annoyed by) spotting the "ctrl - C, ctrl - V" (for anyone not familiar, that is the keyboard shortcut for Copy and Paste) that I lost all interest in the book. Add to that, very obvious questions are never asked (if both people are given GHB and it knocks them out, then where is the container it came in assuming the suspect gave it to himself and the victim?) over and over again... it was truly a disappointing read. The first book was good and I gave it 4 and 5 stars, this was a mindless repeat.
I been robbed I tell ya, robbed!

I enjoy this genre as a relaxing read, but I challenge my mind trying to figure out how the story will end before the actual ending of the book. I enjoyed the first book of the series, but this one did not matchup to my expectations.

The book is well written, the plot twists and turns and the characters are interesting. Siegel has an excellent command of the English language. The story takes place in San Francisco. Daly and Fernandez used to be married but are now just law partners. This adds some spice to the story. Like Perry Mason, Daily tries to complete his case in the Preliminary Hearing but in this instance unsuccessfully as the case went on to trial. I am looking forward to reading the next book in the series.

The book is ten hours and thirty-five minutes. Tim Campbell does a good job narrating the book. Campbell is an Australian actor and voice over artist. He has won numerous Earphone Awards.

After reading "Special Circumstances" I was excited about reading the series. The second book, "Incriminating Evidence" is nearly identical to the first including verbatim excerpts of text. The plot and courtroom strategy are so similar I stopped reading.

Once upon a time there were epic flicks that touted, "...and a cast of thousands!" Well it felt like Sheldon Siegel out did them by giving each of his mega cast in 'Incriminating Evidence' (IE) key speaking lines. I felt as if I needed a note pad. Usually a narrator as good as Tim Campbell helps to keep characters straight through unique voices. Not here, since there are so many minor characters who trundle important clues onto the stage, well, by about a third of the way in, that stage was packed tighter with voices tighter than the stage for Hallelujah in the Mormon Tabernacle.

Worse yet, Mike Daley, IE's lead character, is a wuss with a spine mushier than a 5 week old strawberry. Which makes me wonder why high profile clients continue to make their SOS calls to him. Yet, IE has such a whirl of stuff going on that it not only kept me wondering till its end, but I even stopped about 40% of the way into the book and restarted it from the beginning to let my memory plant flags into each of the characters to keep them straight.. I've never done that before.

These are commercial books, and Mr. Siegel is a writer-for-money. That demands a certain discipline. OKAY, I can suspend disbelief as the embattled DA finds layer upon layer of implications pooped onto his case. It did fire my curiosity about how Daley/Fernandez would dig him out. It kept me listening. But really, all those characters to do it? Come on.... Discipline Mr. Siegel. FA'GAWDZAKE - DISCIPLINE!

BTW, it's wrong to call this a Daley/Fernandez story. Fernandez has become a minor character with little significance to plot or even character development. And there is a sameness, a deja vu repetition of past Siegel plots.

Unless I see some sparkling reviews from trusted reviewers of future Siegel novels this may be the last of his books for me.

I bought the first book in the series and liked it. Bought the second book and it is virtually a rewrite of the first book with a little change in the plot. I thought some sections were copied and pasted directly out of the first novel. Disappointing. The narration by Tim Campbell was good however.

It was enjoyable, but not as riveting as I hoped and the narrator could have added more emotion. It was too flat.

Excellent, but still weakest in the series!

I've now completed the six novels in the Mike Daley/Rosie Fernandez series available in audio format, Incriminating Evidence is a very good legal thriller, but the other 5 novels are better. I especially liked #8 and #1 in this series, All of the Daley/Fernandez series novels include lots of courtroom and suspense. Tim Campbell's narration is consistently outstanding. I do recommend all novels in the series.

A decent author, a plausible plot, realistic characters, dialogue that did not seem lifted from a comic book.

What could Sheldon Siegel have done to make this a more enjoyable book for you?

He should have taken several creative writing classes, had a firmer grip on American english and learned how characters are developed. I kept reading as though it were a comedy

Laurence Olivier could not have saved this dog.

I gave the guy one more chance and could not get past chapter 2. This tripe should be in another section of Audible's inventory, the one where they put them prior to deletion.