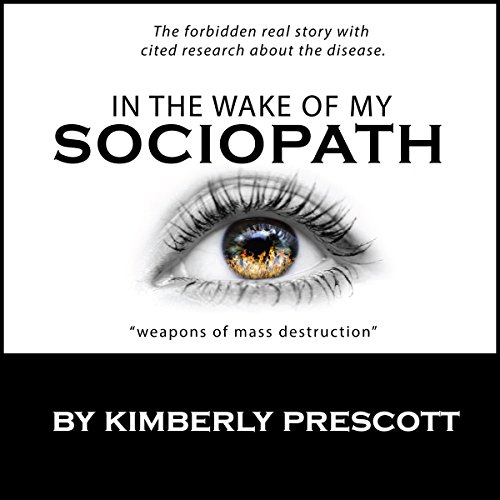 In the Wake of My Sociopath

In the Wake of My Sociopath

In The Wake of My Sociopath features a real-life story of a woman whose life was twisted and distorted by a sociopath and her rise to victory through research, recovery, and the ability to help others through her prose. The story begins with her true story of her days on the road running for her life after her sociopath threatened her very existence. The goal is to bring awareness of this disease.

Leaving everything she knows behind, not sure of where she was going or how she will end up, this woman embarked on a journey of new life, new beginnings, and a need to research the disease that brought her here, the disease of a sociopath.

The body of the book features tactics commonly used by a sociopath, whether man or woman. These tactics are used over and over again as witnessed in research. The body of the book includes the unfolding of pieces of one woman's true story while the research and evidence help to build credibility and style to the book. From love bombing to gas lighting and everything in between, the specific tactics documented in these chapters wrapped by a true story to help others identify and spot a sociopath since evidence shows that one in 25 people is a clinical sociopath. The research is staggering and as this book demonstrates, there is a great need and desire to understand the mind of a person without a conscience. This has been covered in the media, the movies, and is fraught with despair by those that have been touched.

The conclusion of this book deals with the road to recovery, life after a sociopath, and resources for those who have been touched by a sociopath. The book is my own personal story written without names to protect my children, but it is based on a true story and is written with all the passion, purpose, and might a mother can have. I spared no details. The book is raw and explicit in its details of how sociopaths work.

Interesting, but no great depth

This,was an interesting book, however it had sections that were quite repetitive and the narration/audio did not seem professionally produced (a lot of audible breathing, lipsmacking and ambient noise).