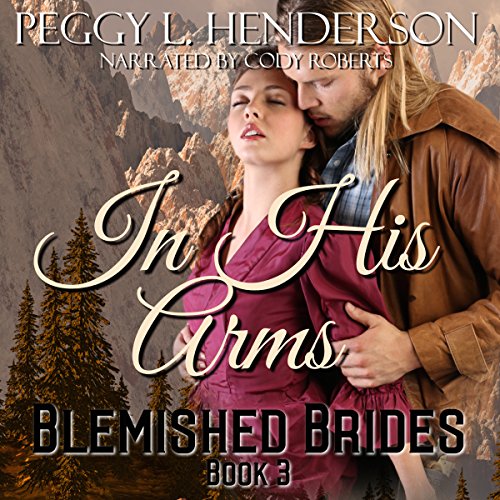 By: Peggy L Henderson
Narrated by: Cody Roberts
Try for £0.00

A woman unable to trust. A man consumed by guilt. Can two lonely souls find a common ground and pave a path to love?

Grace Jennings knows how to survive, but she's learned long ago not to trust anyone, least of all a man. Sent west on an orphan train with her sister, Grace finds herself adopted into an unimaginable situation. She will stop at nothing to find and reunite with her sibling, and keep her safe from the man who is out to exploit homeless young girls.

Levi Colter is a loner by choice. Haunted by the guilt of his sister's death, he escapes into the mountains with his grief. Living an isolated life protects him from the heartache of losing those closest to him. When a stubborn young woman and a couple of runaways seek shelter at his cabin, Levi's solitary existence is turned upside down.

Thrown together unexpectedly, Grace and Levi are forced to put old hurts aside and confront their deepest demons. Can two people with troubled pasts let go of their guilt and mistrust, and learn what it means to open their hearts?

What listeners say about In His Arms

Great story, wish it was longer!! Cody Roberts once again does the narration perfectly.
This is the story of Levi and Grace. Grace, the blemished bride, has an obvious blemish. Actually she is quite blemished. Levi is pretty much perfect! But, he still needs Grace. You'll see.

I think Peggy Henderson does a good job of portraying the reality of orphan life in the 1800s. Everything she described was very real, unfortunately for the people who experienced it. I can always count on Peggy to be historically accurate.

Oh, and characters from the previous books do make an appearance, which I love.

In His Arms: Blemished Brides Book 3

Grace Jennings is my favorite blemished bride. She learned early on that men couldn't be trusted. It started with her worthless father. First, he sent her out to beg rather than get a decent job. Second, he didn't pay for a doctor when she was injured, leaving her with a permanent handicap. Third, and lastly, he abandoned her and her little sister. Then the priest who was entrusted with the safety of orphans allowed her to be sold to the owner of a bordello. After suffering from unspeakable horrors, she escapes on a quest to find her sister who she was ripped away from. Along the way, she rescues as many girls as possible from the clutches of the bordello owner. When her rescue of her sister landed her with an extra person to care for, she didn't hesitate to help him too. Grace is incredibly brave. It was wonderful that she found a kindred spirit in Levi. He knew firsthand the pain that she suffered because he too was on an orphan train and was separated from his sister. He never got the reunion with his sibling but he got a second chance at happiness with Grace. It was admirable that they both decided to help other orphans learn a trade that that they could use to better their lives.

What did you love best about In His Arms?

Levi being so drawn to Grace even with her handicap. He found her beautiful and he couldn't understand why he was so drawn to her. This was in town when she fell at his feet and he helped her up.
When he went back to his cabin up in the mountains he was surprised and sort of shocked to find her there cooking and eating with two children. The a beautiful story is woven from there, woven only as Peggy Henderson does.

What was one of the most memorable moments of In His Arms?

When Levi thought he lost Grace to a mountain Lion when he came back to his cabin after a few days away for hunting. She was on the ground and he heard his horse making noise and his mule braying and he new something was up and saw a bundle on the ground and the crouched mountain lion and realized it was Grace and with quick thinking he threw his knife killing the mountain lion and it fell right in front of Grace. He knew then he loved her.

What does Cody Roberts bring to the story that you wouldn’t experience if you just read the book?

Cody has one of those voices that is smooth when he reads but he can do the voices of all the characters well and keep them as distinct from one another.
He makes Levi's drawl sexy sounding and makes him sound like a very honorable man that he is.

The story line itself is one of disgust in the beginning and through out here and there when the topic of these orphaned girls being adopted to parents who have been paid to adopt them knowing they would be turned over to a bad man who puts them in his brothels.
The rest of the story is complex, woven and well done to bring not only redemption to Grace as she sees herself, but a love between her and Levi that will last the ages.

Although I didn't cry, I wanted to at times when the girls in brothels came up and I laughed at some of the things Levi thought or did and same as Grace when she was more lighthearted and teasing Levi.

I had read this story already but listening to it brought more to life and it was still very good if not even better.
I love all of Peggy's stories as she really knows how to weave a complex story with many angles and emotions and action into them.

Peggy never disappoints. Her characters are down to earth, believable, and compassionate. So hopeful during times like these.

I have read four of your books, I couldn't put them down,the narrator (Cody Roberts are the greatest.
Thank You Peggy Henderson. Number 5 coming up.

I loved this story and I love this series! Peggy L Henderson shows that everyone deserves love, even if they are not perfect. Great story!!

Thrown together by accident, Grace, and Levi learn to trust by opening their hearts and exposing themselves to what they fear most, to help stop a cruel man from exploiting homeless young girls. In the process, Grace finds more than what she is searching for.

I love this series of books. The voice actor is magnificent. Can wait for more.

I love the way Peggy L Henderson weaves the characters from her other books all together. They become real and you yearn to read more about them.
Grace was a orphan adopted out into an awful situation. She was seperated from her sister and she will do anything to try to get them back together and to keep her sister safe.
Levi lives on the mountain, he is a loner and prefers to keep it that way. He is an excellent tracker and hunter. He was taken in by an old man when he was a young run a way, himself.
How Peggy L Henderson weaves their lives together and includes many wonderful new characters and many familiar ones is magical.
My only complaint was that it the series ended way to quickly.

Where does In His Arms rank among all the audiobooks you’ve listened to so far?

The kindness that Levi has because of kind of man is was, not because Grace was the perfect woman. He looked beyond her imperfections, and loved her perfectly.

Have you listened to any of Cody Roberts’s other performances before? How does this one compare?

Yes and he did it again! Wonderful!

No, just a sweet touching book about two people who choose to lay aside past fears to create a life together.