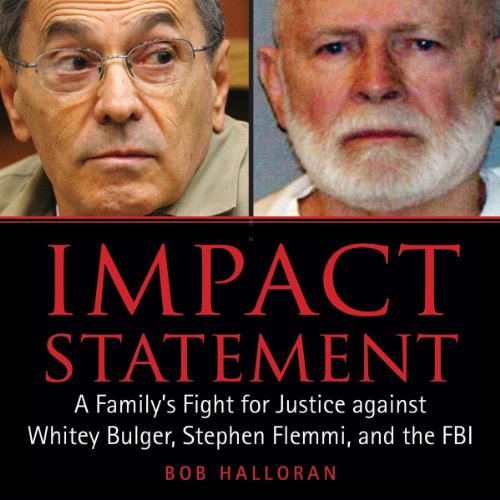 A Family's Fight for Justice against Whitey Bulger, Stephen Flemmi, and the FBI
By: Bob Halloran
Narrated by: Christopher Kipiniak
Length: 8 hrs and 39 mins
Categories: Non-fiction, True Crime
3 out of 5 stars 3.0 (2 ratings)

As the biggest criminal trial since the Boston Strangler draws nearer, the public’s fascination with the life and crimes of mob boss Whitey Bulger continues to heat up. Many stories have been told about the murders Whitey and Stephen “The Rifleman” Flemmi committed, and the tacit permission they received from the FBI.

But never before has the story been told from the point of view of one of the victim’s families - until now.

Impact Statement is the first book to provide background into the family of a victim and their own compelling history and experiences, their decades-old fight for justice, the momentous victory over the US government, and their angry quest for the closure that Bulger’s trial may provide.

Author Bob Halloran will have front-row access to the trial and the ensuing media blitz, as he observes the trial alongside Steven F. Davis, perhaps the most outspoken advocate for the victims’ families. The murder of Davis’s sister, Debbie, is what keeps Flemmi jailed to this day, and remains the most horrific and arbitrary killing committed by Bulger and Flemmi.

Steven Davis’s colorful commentary and reflective admissions of his own criminal past will reveal how he was once a protg of Flemmi’s, and how the Davis family’s longstanding relationship with Flemmi cost them a father, two sisters, and a brother. Such is the devastating impact Bulger and Flemmi’s violence had not only on their own families, but many others as well.