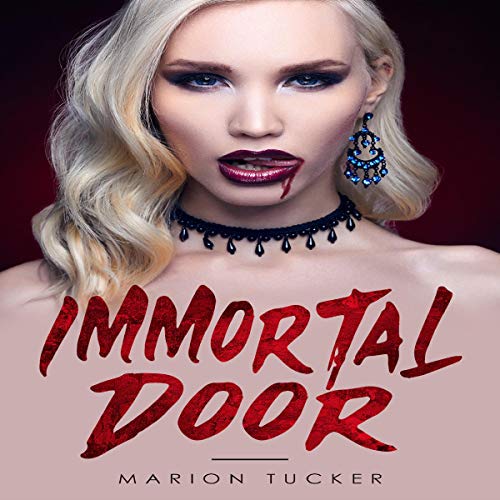 By: Marion Tucker
Narrated by: Catherine Carter
Try for £0.00

A young 17-year-old murderer is sired into a vampire. A vampire from another dimension has sired him; she is from a world where vampires are real and part of the lower class slave group of vampires. She wants power, and this is why she sired George to help her open a doorway to her reality once again. When he falls in love with Jasmin, a beautiful young girl, everything turns upside down. Max, the ghost of the friend he killed before turning into a vampire, shows up and tries to warn Jasmin of the dangers she is in. Will George's sire Chloe get the power she desires? Listen to find out.

What listeners say about Immortal Door

This story was an interesting one. Not bad, it just seemed more like an Edgar Allan Poe type story than one that is meant to bring you into the story and a different world. I got confused a lot switching between characters and scenes from one paragraph to the next. It sounded that way anyways. The narration could have been better. Random pauses happened throughout the book and I could hear her swallow and smack her lips a few times. But she has a lot of potential in recording good books!

I did have a couple laughs throughout the book, and the story. Just wish I had been brought into the world by the words instead of being told the words.

This story is a bit unique to the typical vampire books which have it a bit more background to their worlds. I really enjoyed seeing where this went and hope there will be more in the future.

Twists and Turns A Plenty.

This story has vampires, ghosts, murderers, slaves and a whole book full of plot and counter plot. If you like a supernatural mystery then this is for you. Well written, nicely narrated, very interesting plots, engaging and enjoyable.

good story, narrator got better as book went along, hard to tell each character apart

I had a difficult time following this book because the narrator wasn’t very good at changing up her voice. I couldn’t tell which character she was. I love vampire books but this one was not for me. It was short, which is about all I have positive to say about this one.

The story is cute not really scary, but still enjoyed. The narrator's voice good, but there was a lot of bumping of the microphone, rapid speech, then long gaps between some sentences to catch her breath, resulting in, sentences being cut off and a lot of wet lip sounds. I think she will get better in time, if she slows down some and improve the editing. I would be willing to listen to another story.

It is so distracting that it takes away from the story. The audio cuts in and out and there are unnaturally long pauses. Then you can constantly here the narrator making mouth clicks which is one of my pet peeves.

All throughout the entire story it is so painfully obvious the narrator is reading, so again just too many narration problems that you can't even enjoy the story.

The story seemed okay, but again I couldn't get into it because of the many narration and audio problems. Would love to listen with a different narrator.

this audio not for me

I didn't like. there wasn't any chemistry in the story. you could tell the narrator was reading it.

Enjoyed the story very much. Unique take on vampires. Jasmine and George are both interesting characters and has good world building
Narration is a personal choice so take keep that in mind. I struggled with the narration and production of the book. The narrator has a great voice but isn’t very skilled in narration. It’s also choppy between chapters and paragraphs

Could of been so much better

it was a unfinished story in my opinion and I thought it could of been great. At times I was a bit confused but it was entertaining. Hopefully the author will continue the story and fix the audio issues .

The story started out pretty good and then at some point I started struggling to finish. I expected more excitement. Even the action parts were dull. The narrator seemed very monotone overall.

This is the second book by Marion Tucker, the first being Love, Magic, Aliens, and Chance. I enjoyed this one just as much, and was well worth the time. Five stars.

It was an interesting read. Enjoyable and fun.

A good read that will let you escape reality for a bit.

This was my first Marion Tucker's book. This is a short Sci-Fi/Paranormal novella. The characters are great, the storyline is interesting and original, but the story didn't really get my attention. Catherine Carter's narration was okay. I received this free review copy audiobook at my request and I have voluntarily written this review.