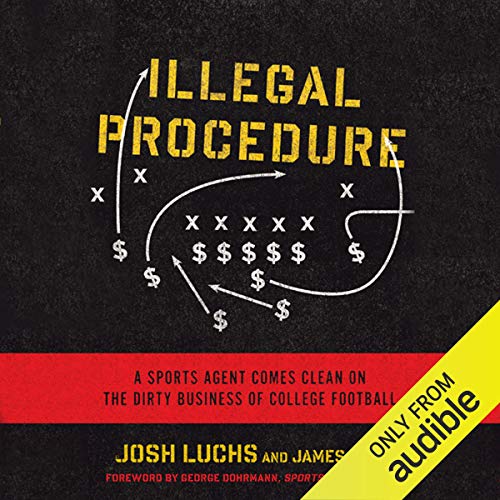 For 15 years, sports agent Josh Luchs made illegal deals with numerous college athletes, from top-tier, nationally recognized phenoms to late-round draft picks. Flagrantly flaunting NCAA and NFL Players Association rules, he made no-interest loans to players in exchange for the promise of representation on their lucrative pro contracts. After cleaning up his act in 2003, he moved to a new agency, only to be targeted and pushed out of the business for a new violation - one he arguably did not commit. Then, in October 2010, Luchs wrote a confessional article in Sports Illustrated, telling the truth about what he did and didn't do.

Since then, he has taken on a new role: whistle-blowing, truth-telling reformer. And in telling his own story, Luchs pulls back the curtain on the real economy of college football: how agents win players legally and otherwise, the staggering sums colleges make from an unpaid workforce, the shortfalls of supposed full-ride scholarships, and the myth of a college education given to scholarship jocks. Including new information about major players and scandalized programs such as USC, Auburn, and Ohio State, this book pulls no punches. It's a stunning and necessary listen for anyone who loves the game, and the first step toward fixing a broken system.

"Get ready for the wildest ride in sports literature. Josh Luchs takes you through two decades of what goes on behind the scenes in sports: where the money comes from, how it's handed out, where it goes, and what it means. Not only does Luchs name names, but he tells detailed stories and anecdotes. Just as the Valachi Papers helped to weaken the mob, this story may help clean up some of the shady dealings in college football. It's a must read." (John Clayton, ESPN)
"In my informed opinion, as someone who has experienced up-close and personal the backroom deals that occasionally pervade big-time college football, Josh's pronouncements are incontrovertible and provide an entertaining inspection of the world of the 'student athlete.'" (Brian Jones, former NFL linebacker and college football analyst, CBS Sports)
"[Luchs] writes (assisted by co-author Dale) with humor [and] honesty…A troubling, entertaining indictment of the hypocrisy of big-time sports." (Kirkus Reviews)

What listeners say about Illegal Procedure

I have been an avid football fan for many years so to hear alot of the dirty secrets College Football and its overally primed egos have is no surprise but very entertaining. This was well told and inspriing in its own way. It carries a very distinct message about the game and where it is headed if we aren't careful. I enjoyed it quite a lot.

The book was ok, but it didn't have enough action or excitement. I expected it to be more interesting.

Add more of the juicy stories about sports.

Was Illegal Procedure worth the listening time?

Maybe, but it could've been better.

Great insight to the world of agents and football players.

Recommended to any football fan especially players in high school so they have a glimpse into what goes on.

It is what you would expect

I love football and I love a story behind the story. This book was okay, not great.

Eye opening and a must read for any FOOTBALL fan

What made the experience of listening to Illegal Procedure the most enjoyable?

Luchs does a great job of analyzing every angle of the business of football. From the impact of agents, to college coaches, to mock drafts. It was so incredible. He mentions REAL NFL players and has a boat-load of stories about what certain players did for money, and what players refused money! Like Champ Bailey.

If you could sum up Illegal Procedure in three words, what would they be?

The lead character because he walked us through the process of trying to reach the top of a very competitive business.

Have you listened to any of David Ledoux’s other performances before? How does this one compare?

I was thankful that the author was willing to provide information that many agents are not willing to discuss. I also thought it was great that he provided his opinion concerning ways that the industry could be made a little cleaner.