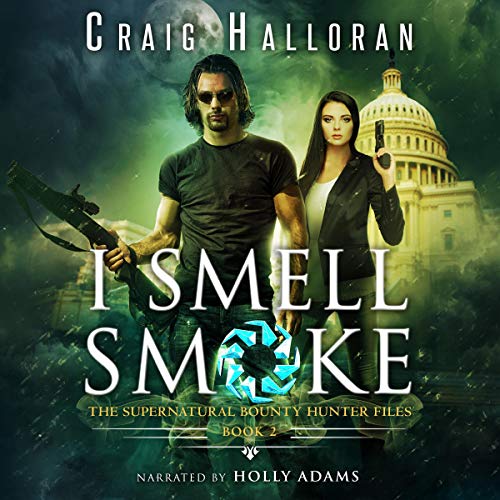 No signs of smoke.

Sidney thinks she’s getting the hang of things only to find herself at odds once again with her annoying and unappreciative supervisor, Cyrus Tweel. To make matters worse, there’s been no talk about the Black Slate or the whereabouts of Smoke, leaving her in the dark and feeling more isolated than ever. During a stakeout with Cyrus, strange things begin to emerge. Black suns and oddly familiar children begin to show up. The Drake’s fingerprints seem to be on everything with which she’s involved.

When Sidney begins to fret her new duties and doubt her peers, Smoke shows up in a suit looking as gorgeous as ever. While Sid is initially captivated, it’s not long before they butt heads over the next Black Slate assignment, a mysterious woman called Night Bird.

Timing is everything, but family troubles emerge a day before Christmas Eve when Sidney’s sister, Allison, goes missing and a mysterious stranger shows up at her parents’ home. Reluctantly, she agrees to take Smoke to her parents, but on the way, a semi-truck, owned by Drake, runs them off the road, totaling the Interceptor.

Will Sid and Smoke get closer, or will the wicked powers that be force them apart?

What listeners say about I Smell Smoke

Format: audiobook
Narrator: Holly Adams
Enjoyable story following FBI agent Sidney Shaw and her mysterious ‘asset' Smoke.
The Grey Slate list gives them another supernatural being to try and bring down.
This is an interesting series, Smoke is an intriguing and likeable character I also liked his team, Guppy and Phat Sam, they were not what I expected but Sidney’s attitude is making her a very hard character to like, she may be the main character but I wouldn’t be upset if she was killed off and replaced!
Overall it has a good storyline although the sound effects are annoying and sound silly but the narrator does a good job.

Plenty of action and twists. Entertaining story and more of the story arc is revealed. Like the characters. The narrator did a fantastic job! I received a free copy of this audiobook at my request and have voluntarily left this review.

Loved it loved lived it

This audio book it well read. And so fun to listen to... Even the tense parts. I couldn't stop listening. The story is wonderful and I can't wait to read the next 8!

I Smell Smoke starts off at a fast pace and grabs your attention right from the start. Absolutely continues to build on the original book . Will definetly be looking forward to book 3.

This is a great syfy novel! I really like the characters and the storyline was intriguing. This is the second in the series and I missed the first. I feel like the story would’ve been better if I had read the first but still great. I can’t wait to see what happens next

Awsome characters. the narrator is really good at changing voices. fun series to listen to.

Don't miss this one!

I'm only on the second book in this series, but am eagerly looking forward to the rest. They are well-written books with lots of action, realistic characters and paranormal elements galore. I like that these are short and to the point, traces of a possible coming romance, but not a romance novel by any means, with a heroine who isn't afraid to jump right into a fight. I am really enjoying these books! That being said, the clincher is the narration! I have never enjoyed a narrator as much as I do this one. I know there are some great narrators out there, really great ones, but the enthusiasm that Holly Adams has for this book truly drags me in and ensures that I will continue to listen. I just recommended this series to my brother, but stipulated that he has to listen to them, not read them. I might have read the whole series on kindle, but I certainly would not have been as excited about them. Ms. Adams does an amazing job, particularly with the many gun fights! I listened in awe to the first one, and will listen to the very end of the series, hoping for more. I received a free code for this book and am leaving an honest review of my own accord.

Further down the rabbit hole

This book picks up where the last left off, with the return of FBI agent Sidney Shaw. She is investigating another kidnapping case. She crosses paths with John Smoke, along the way.

Sidney finds that the children she had rescued in the conclusion of the first book, are in trouble, again. This makes Sidney wonder what people want these children, so desperately for. She finds herself pulled into a much bigger mystery and starts finding she has a lot of questions about the world she thought she knew.

This book gives me that second in a trilogy vibe, where there are more questions than answers, by the end of it.

I find my interests very piqued to hear the conclusion in this arc.

Holly Adams is an execellent, and very underrated narrator, in my opinion. She brings the exact atmosphere to the novel that it needs, and speaks clearly and articulately. She is definitely a rising star, whom I look forward to watching rise.

I would recommend this book to those who are fans of Supernatural, Black List, old film noir, and the Anita Blake novels.

Sidney thinks she’s getting the hang of things only to find herself at odds once again with her annoying and unappreciative supervisor, Cyrus Tweel. To make matters worse, there’s been no talk about the Black Slate or the whereabouts of Smoke, leaving her in the dark and feeling more isolated than ever. During a stakeout with Cyrus, strange things begin to emerge. Black Suns and oddly familiar children begin to show up. The Drake’s fingerprints seem to be on everything she’s involved with.