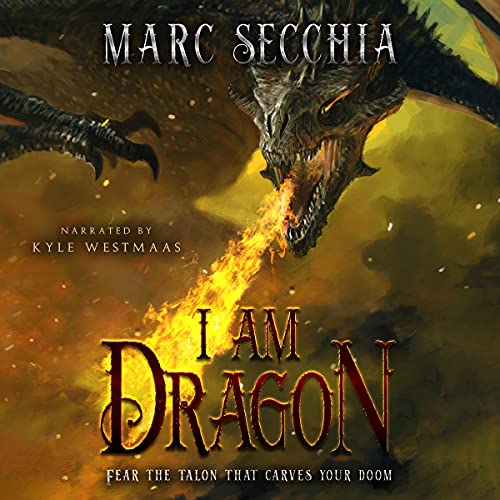 By: Marc Secchia
Narrated by: Kyle Westmaas
Try for £0.00

I am Dragon. Fear the talon that carves your doom!

The second hilarious, epic volume that follows the adventures of a dragon, oddly enough, called Dragon, and his heroine sidekick, the Black Princess Azania. (In case you wondered, her idea of a sidekick is to kick his sides. Obviously.)

Dragon Rider and Dragon. Beauty and her beast. As unlikely a pair as ever set out to turn a world upon its head.

What listeners say about I Am Dragon

The second book is just as good as the first!!! The puns are hilarious and corny!!! I love it. The battles are detailed and thrilling and meeting Dragons Dam Siren Song is beautiful!!
Whole hearted recommendation to dragon lovers!

Hand-down excellent book! Dragon and the princess are at it again to save kingdoms and bicker with one another. So much laughter, humor, action, adventure, and LOVE! And Kyle Westmaas did an excellent job as always!

You won't be disappointed!

More entertaining than the first

Do not read this unless you’ve read the first book.

Narrator: excellent pacing and differentiations between characters. Kyle really brings Dragon to life.
Language: none
Violence: if this were a movie it’d be rated PG/PG-13 depending on how the director chooses to go.
Sexual content: references to female figures and their effects on men (nothing terribly graphic)
Parents: safe for 12/14+
Story: we dive deeper into dragons lineage while continuing to grow into a new breed of royal with his captive princess. More intrigue and adventure than the first novel and leaves you wanting more! I’m excited to see where things go in the next book.

—I was given this free review copy audiobook at my request and have voluntarily left this review.

It's all black and white!

The battle at T’nagru granted Dragon the ability of fire!; a white fire, which is very telling. They managed to rescue twenty-six of the thrall dragons being used by the Cartomb to assault the city. Azania and Dragon left the thralls in the care of Azania’s brother, the new King of T’nagru. Azania’s father perished in the battle. They prepared to leave, taking Inzashu, Azania’s half-sister, and Urinda the old woman/dragoness healer. Their next task is a diplomatic mission to the Tamborine Mountains to ask the other dragon clans for assistance in the war. The war appears to go by the wayside as many more adventures for Dragon and Azania take place. Urinda and WaveWhisperer, SeaSerpents, the revelation of Siren Song, crossing the Luminess Ocean, and the Dragons of the Archipelago. Their meeting with Aril Emreal Seaspray has Dragon smitten and forked-tongue-tied. Where will this infatuation go? This is a beautiful story. Love and understanding of all people run deep. I was given this free review copy audiobook at my request and have voluntarily left this review.

After being given book 1 to review, I had to purchase book 2 as I couldn't wait to get into it. This one was even better than the last! If you enjoyed the first one, you will love this one.

A bit of puns, a bit of alliteration, a bit of fun, lots of fighting. Lots of surprises!

I was given this audiobook by the author for free and have voluntarily left this review.

This was the perfect mix of snarky conversation, puns, lighthearted humor, and devastating pain, fear of rejection, love and loss. Above all the story hits on the impact of prejudice, hate, and conversely the impact of compassion and love. Truly Beautiful.

Im glad we finally find out about his heritage and where he comes from. It was an amazing listen and I cant wait for the next book