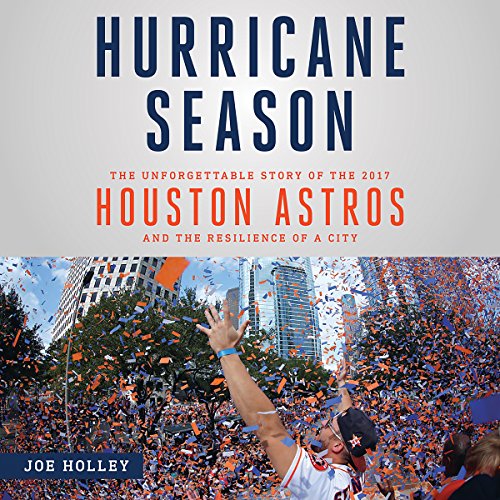 Hurricane Season: The Unforgettable Story of the 2017 Houston Astros and the Resilience of a City

An inside look at the 2017 Houston Astros championship season, focusing on the epic seven-game World Series, the front office decisions that built a winning team, and the resilience of the city in the wake of Hurricane Harvey.

On November 1, 2017, the Houston Astros defeated the Los Angeles Dodgers in an epic seven game battle to become 2017 World Series champs. For the Astros, the combination of a magnificently played series, a 101-victory season, and the devastation Hurricane Harvey brought to their city was so incredible it might give Hollywood screenwriters pause. The nation's fourth-largest city, still reeling in the wake of disaster, was smiling again.

The Astros' first-ever World Series victory is a great baseball story, but it's also the story of a major American city - a city (and a state) that the rest of the nation doesn't always love or understand - becoming a sentimental favorite because of its grace and good will in response to the largest natural disaster in American history.

The Astros' miracle season is also the fascinating tale of a thoroughly modern team. Constructed by NASA-inspired analytics, the team's data-driven system took the game to a more sophisticated level than the so-called Moneyball approach. The team's new owner, Jim Crane, bought into the system and was willing to endure humiliating seasons in the baseball wilderness with the hope, shared by few initially, that success comes to those who wait. And he was right.

But no data-crunching could take credit for a team of likeable, refreshingly good-natured young men who wore "Houston Strong" patches on their jerseys and meant it - guys like shortstop Carlos Correa, who kept a photo in his locker of a Houston woman trudging through fetid water up to her knees. The Astros foundation included George Springer, a powerful slugger and rangy outfielder; third-baseman Alex Bregman, whose defensive play and clutch hitting were crucial in the series; and, of course, the stubby and tenacious second baseman José Altuve, the heart and soul of the team.

Hurricane Season is Houston Chronicle columnist Joe Holley's moving account of this extraordinary team - and the extraordinary circumstances of their championship.

What listeners say about Hurricane Season: The Unforgettable Story of the 2017 Houston Astros and the Resilience of a City

Great story, combining an excellent description of the effects of Hurricane Harvey on the Houston area, and the impact of the Astros heroics. I’d recommend this audio book to anyone.

A tribute to the fans

Great book! If you've read Astroball, this covers most of the same story: how the Astros became World Series Champs. But each book tells it from a different angle. Astroball focuses more on the theory and decisions the Astros made to pivot from last place to the best, while this book tells a more personal story. The drama of the Astros 2017 season cannot be told without acknowledging the impact that hurricane Havey had on the team and the Houston fans. This book is a wonderful tribute to the thousands of Houstonians affected by Harvey who found hope in the local team that let so many still feel like winners despite being surrounded by undeniable loss.


Minor critiques for the narrator's pronunciations of regional names Pearland and San Jacinto, don't seriously detract from a well written juxtaposition of the baseball recaps and stories of the legends and locals that made and embody Houston.

I am one who lived through this. In 2017 I lost everything to Harvey. I didn't get to watch my hometown Astros win the World Series, I was too far gone - lost in the chaos of insurance and survival. But I can attest to the accuracy of this beautifully written narrative even though there is no need for such testimony. The author is a highly acclaimed and respected Houston columnist and a first class writer.

This book is going to be a sleeper. It is non-fiction. It is regional. As such, it will forever be relegated to bookstores' "Regional" sections; and only in Houston bookstores at that. Thanks to Amazon however, "Regional" is now a category void of meaning.

The narration is fine. It could have been read by Scott Brick (the reader of the audio edition of "Moneyball"). But here, Jamie Renell is a better choice. He is every bit as good as Brick in his ability to avoid sounding like he's reading to someone convalescing in a hospital recovery room. Plus, Renell is a tad more restrained - less apt to flights of melodrama.

All in all, this is everything an audiobook should be. I recommend it highly. You won't be disappointed. I promise.

Why didn’t anyone correct Jamie Renell’s pronunciation of the city “Pearland” and the river “San Jacinto”???? It’s very annoying and takes away from the story, at least for a local who knows better. Besides that blemish, this is a great book. I love the accounting of the Astros season and the storms devastating effects but also the thoughtful historical reflections throughout the book. Great job!

loved every moment of this book! From the history of Houston, to the real life stories of survivors, to the story of the Astros. The book goes on to talk about the players and those behind the scenes and those who helped create the Astros. Some gut wrenching stuff and some happy stuff... almost like a Hollywood movie. Well worth the listen!

The book is a chronological mess. It starts with game 1, then talks about the Astrodome, then gets back to the WS, does this jumping around throughout, and ends with a story from the 1800's that has nothing to do with baseball. The author wanted to tell his story, and wrapped it in the success of the Astros to get people to buy it.