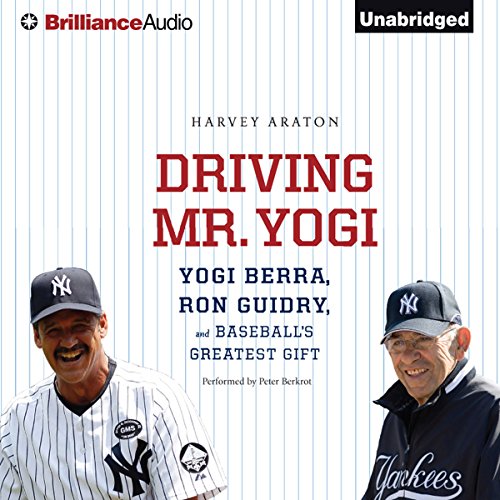 It happens every spring. Yankees pitching great Ron Guidry arrives at the Tampa airport to pick up Hall of Fame catcher and national treasure Yogi Berra. Guidry drives him to the ballpark. They watch the young players. They talk shop. They eat dinner together and tease each other mercilessly. They trade stories about the greats they have met along the way. And the next day they do the same thing all over again.As every former ballplayer can appreciate, in that routine, every spring, there emerges a certain magic.

Driving Mr. Yogia is the story of how a unique friendship between a pitcher and catcher is renewed every year. It began in 1999, when Berra was reunited with the Yankees after a long self- exile, the result of being unceremoniously fired by George Steinbrenner 14 years before. A reconciliation between Berra and the Boss meant that Berra would attend spring training again. Guidry befriended “Mr. Yogi” instantly. After all, Berra had been a mentor in the clubhouse back when Guidry was pitching for the Yankees. Guidry knew the young players would benefit greatly from Mr. Yogi’s encyclopedic knowledge of the game, just as Guidry had during his playing days. So he encouraged him to share his insights. Soon, an offhand batting tip from Mr. Yogi turned Nick Swisher’s season around. Stories about handling a hitter like Ted Williams or catching Don Larsen’s perfect game captured the players’ imagination. And in Yogi, Guidry found not just an elder companion or source of amusement – he found a best friend.

By turns tender and laugh-out-loud funny, and teeming with unforgettable baseball yarns that span more than 50 years, Driving Mr. Yogi is a universal story about the importance of wisdom being passed from one generation to the next, as well as a reminder that time is what we make of it and compassion never gets old.

“How would you like to hang out with Yogi Berra and Ron Guidry during spring training? Funny and sweet, Driving Mr. Yogi transports you there.” (Jim Bouton, author of Ball Four)

Where does Driving Mr. Yogi rank among all the audiobooks you’ve listened to so far?

It was a good book but a little draw out at times a bit dry.

Would you be willing to try another book from Harvey Araton? Why or why not?

A good book for Yankees and and baseballs fans. It opens up the curtin behind the yankees clubhouse and what was happening there.

If you could sum up Driving Mr. Yogi in three words, what would they be?

It was a touching relationship (one I never knew about) between Mr. Guidry and Mr. Berra.

What did you love best about Driving Mr. Yogi?

This book shows the human side of a guy who you already knew was down to earth and a really nice person. It shows that what we think about Yogi is really what he is. Great book. I learned a lot about Guidry in the process that made me like and respect him so much.

A must for Yogi fans

As a child I idolized Yogi, met him the 80s with m son and have remained a Yogi follower. This book like reading Phil Pepe’s and rereading all of Yogis is just great. The bond between Gator and Yogi was awesome.

I loved this book. It made me laugh and it made me cry. It demonstrated what a great man he was besides being a great baseball player. Anyone who loves our National past time must listen to this fabulous audio book.