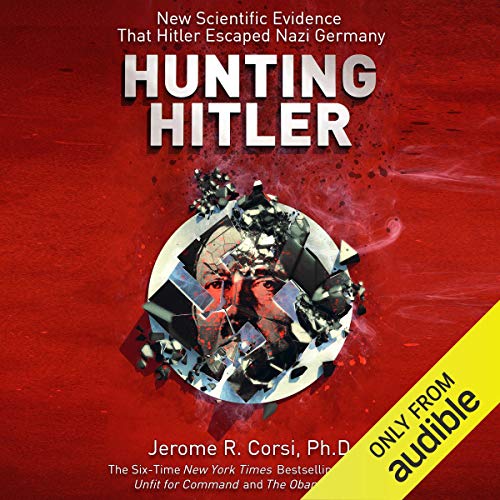 By: Jerome Corsi
Narrated by: Danny Campbell
Try for £0.00

In 2009, three US professors with access to Adolf Hitler’s alleged remains startled the world with scientific DNA proof that the skull and bones that Russia had claimed since the end of World War II were Hitler’s actually belonged to a middle-aged woman whose identity remains unknown.

This announcement has rekindled interest in the claim made by Joseph Stalin, maintained to the end of his life, that Hitler got away. The truth is that no one saw Hitler and Eva Braun die in the bunker in Berlin on April 30, 1945. No photographs were taken to document claims Hitler and Evan Braun committed suicide. Hitler’s body was never recovered. No definitive physical evidence exists proving Hitler died in the bunker in Berlin.

Dr. Jerome Corsi explores the historical possibility that Hitler escaped Nazi Germany at the end of World War II. FBI and CIA records maintained at the National Archives indicate that the US government took seriously reports at the end of World War II that Hitler had escaped to Argentina. More recent evidence suggests Hitler may have fled to Indonesia, where he married and worked at a hospital in Sumbawa.

Even the chief of the US trial counsel at Nuremburg, Thomas J. Dodd, was quoted as saying, No one for sure can say Adolf Hitler is dead.”Putting massive amounts of evidence and research under a critical eye, Dr. Corsi shows that perhaps modern history’s most tantalizing question has yet to be definitively answered: Did Hitler escaped Nazi Germany at the end of World War II to plot revenge and to plan the rise of the Fourth Reich?

What listeners say about Hunting Hitler

I can imagine some will look at this book and thinks it’s only 4 hours long, but it is packed with testimony, references and historical facts.

I’ve read and watched many documentaries on this subject, but it’s always interesting to see another perspective, and how the tangled web of rat lines, and deceit of allied governments either wanting to take credit or for propaganda purposes muddied the waters so these despicable war criminals eventually got off Scott free.. well most anyway!

Still not convinced - quite...

Well written and with some compelling evidence that Hitler did actually survive the war and escape to South America.
However, as a dentistry person, I found the evidence linked with this part of the account very hard to swallow. I believe that the dental evidence that was used to identify the corpse of Adolf Hitler too compelling to be dismissed in the way it is in this account.
Never the less a very enjoyable listen, and I would recommend it!

Well that’s what I thought, but the more you listen the more it’s plausible and when you add in the control of facebook and google over peoples thoughts and think of the level of Nazi population control.... maybe.

I thought this was the most preposterous thing I have ever heard of in the public discourse.

Now, it turns out the only "proof" (meaning something absolute) about Hitler's body being taken to Russia after the war is false: the body was determined by *American* forensic experts, in an investigation conducted *in* America, to be that of a woman less than 40 years old.

So Hitler did not die in the bunker.

Not great, but not bad up until the closing

Not great, but not bad up until the closing political screed. The evidence is largely conjecture; though parts of it are well supported, the overall narrative is strung together very loosely. The narrator also keeps pronouncing names wrong, which is frustrating to listen to (it's "BRAUN" not "BROWN"). However, the end closes with a poorly reasoned libertarian attack on multilateral cooperation and social safety nets. The connection is tenuous at best, a blatantly manipulative falsehood at worse, and it has no place in supposedly historical and "scientific" work. If nothing else, it's causing me to wonder how much of that clear bias made it into the rest of the book before he couldn't contain it anymore and spewed it all over the final chapter.

This audio book gives some good suppositions to ponder over. Overall, very interesting ideas for the listener.

If you want to experience a badly researched, badly written, and badly performed audiobook in a single title, this is for you! As someone who has done academic research at the graduate level, it is hard for me to believe that Jerome Corsi is actually a PhD. Indeed, it's harder to believe he is a Harvard graduate. This travesty of a book is certainly not a scholarly work and even as a piece of popular literature, it is loose and sloppy on facts. Practically no attribution on any of the controversial denials of long-established historical facts. The most laughable part is his obvious jealousy and pent-up animus toward one of the most respected Hitler historians, H.Trevor-Roper. After you listen to this for about 30 minutes, you realize that practically every point he makes is speculative and he offers zero verifiable substantiation from primary sources. The performance is also terrible, but I'm not sure that the blame can be thrown at Danny Campbell. Reading this rambling, incoherent nonsense aloud probably just sounds bad, no matter who is doing it.

I won't go into Corsi's background or evident lack of credibility. For that, I'll refer you to his Wikipedia page.

The best thing I can say about this pile of trash is that it is now in the Audible Plus Catalog and members don't have to pay for it...and while the Plus Catalog contains many wonderful works, this one is among the few that falls under that age-old concept: "You get what you pay for". Life is short. Don't waste you time with this mess.

Pretty much rewrite your history books

The guy was way too big of a p o s to kill him self. Evidence is overwhelming and I hope they teach the truth someday in the US. I won’t hold my breath waiting

Ultimately the answer is just as unproven as Corsi claims the suicide story is. Still an interesting theory. Corsi goes off the rails a bit when he starts trying to frame the present day as a Fourth Reich. Note that it was written and produced in 2014, so he is not speaking of our present situation. Still, I found that jarring and not really connected to the main focus of the book. The theory is nonsensical; there is no evidence that Hitler survived and plenty of evidence that he died by suicide.

He may have really got away!

What did you love best about Hunting Hitler?

The idea that Hitler really did get out of Berlin at almost the last day and supposedly fooled his immediate staff with a double!

What was one of the most memorable moments of Hunting Hitler?

Description of his supposed escape from Berlin in the nick of time!

Have you listened to any of Danny Campbell’s other performances before? How does this one compare?

Some very compelling arguments for the survival of Hitler were made in this book (by evidence or lack of evidence). Conventional wisdom like this (i.e. Hitler died by suicide in the bunker) is often proved false as time goes by, and this may be another case of that. Although several key situations do not have a source listed, it is still interesting enough to encourage me to get another book on the subject!

Well written account that is very convincing. The narrator was very good. A worthwhile listen.

You've Got To Be Kidding!

I thought this would be a fun listen/read, given the utterly absurd nature of the claims — i.e., that Hitler escaped to Argentina with the help of Pope Pius XII, actually a part of Stalin’s “Operation Myth” to float the propaganda that the west “allowed” him to escape — but instead its a hot mess of conpiranoia, bitter grousing and right wing Tea Bagger ideology. His main conceit is a clumsy attempt at historical revisionism by trying to equate "socialism" (public ownership of the means of production) with "National Socialism" (i.e., Nazi ideology) and hope uneducated people will merely note they *sound* similar so they must *be* the same. Which is of course complete bullsh*t.
Oh, so...neoliberalism and the Democrats are the *real* Nazis? Mmm'kay...
None of which should have been a surprise given that author “Dr” Jerome Corsi is a bloated, er, noted grifter and far right whackadoodle who’s had his greasy hands in a number of particularly fetid turd pies of misinformation and outright lies, like Swift Boat Veterans for *cough*cough* Truth, Obama Birtherism, 9/11 Trutherism, the WikiLeaks/Russian DNC hack, InfoWars and a fakers dozen of similar Tales from the GQP Fever Swamps. Oh, and he was also a player in the Mueller committee hearings, let’s not forget.
Really, it’s not even FUN conspiranoia, it’s just the typical product of an intellectually challenged, ineffectual and bitter old bigot and failed financial advisor who likes to pretend he mattered.
And I'm sorry, but Danny Campbell has no business being a voice over artist.
A must to avoid!