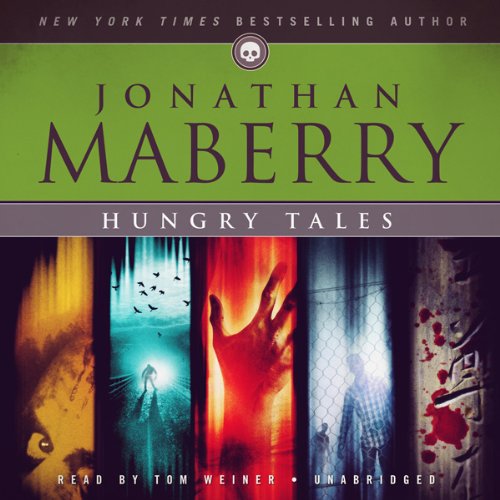 By: Jonathan Maberry
Narrated by: Tom Weiner
Try for £0.00

New York Times best-selling author Jonathan Maberry presents a quirky collection of five stories starring a whole cast of the ever-popular undead. Here you will find a semi-sequel to Dead of Night in which four Army reservists are assigned to hold a small rural bridge during the early days of the zombie apocalypse; a comedic story involving a couple of idiot moonshiners, a comet, gangsters, zombies, and the Great Chicago Fire; a downbeat psychological drama set in the bleak wastelands a few years after the zombie apocalypse; and more - including a story written exclusively for Blackstone.

What listeners say about Hungry Tales

What did you love best about Hungry Tales?

The variety within the tales.

What was one of the most memorable moments of Hungry Tales?

When the sound of the picks stopped.

The final story made me very sad.

This short collection of stories is absolutely outstanding. I liked all of the tales in this book but my favorite has to be the final story about the Samurai searching for an honorable death.

I discovered Jonathan Maberry when a friend recommended Patient Zero to me. I was very surprised to find it so enjoyable. His writing is impeccable. His attention to detail and knowledge of a variety of different areas of science and politics really blew me away. So when I saw a collection of short stories from him I grabbed it immediately, anxious to see if he could do more than a good zombie story. Well, I was not disappointed. This one and also Tales From the Fire Zone were both completely engaging and incredibly well written. His writing is smart and crisp and the stories move quickly and make sense. The gore is just the right amount, the romance is just the right amount, and the tension is perfectly drawn out. With these books Mr. Maberry has solidified himself as one of my top 3 writers. I hope that Hollywood will take note - his books would make fantastic movies.

The stories are very very good. The narration is excellent. Jonathan Mayberry never disappoints me.

Great stories well worth the READ.

Entertaining. Great stories of both the Living and the Dead. The retelling of the GREAT CHICAGO FIRE WAS MOST EXCELLENT.

For the love of zombies...

I love the way that Mayberry takes history, mythology and zombie lore and pretzels them into fun new experiences.

Left me hungry for more, but in a good way!

Really enjoyed this group of short stories. Mayberry paints mental images with his words that I will not soon forget! Highly recommend!

Jonathan Mayberry is an amazing writer and Tom Wiener brings the book to life! I love his narrative!

this is the first time I have ever seen an oriental twist put on the zombie apocalypse. Good twist!

Keeps getting better. Just when I think Jonathan Maberry can’t get any better I read/listen to these short stories. Funny, insightful, culturally significant and relevant...the depth and breadth of Jonathan Maberry is astounding! Listen to The Ghost Road Blues Trilogy...hell, listen to any of his stuff...I’m gobsmacked!

Not often that you come across a good diverse zombie book this one had many diverse stories and I have to admit that I laughed a lot during the one with paddy saves the world that one was funny just the way they portrayed the characters and talked. however the last one was very sad and I wish there could’ve been an actual ending and not a cliffhanger because I really wanted to know what happened overall though it was great.