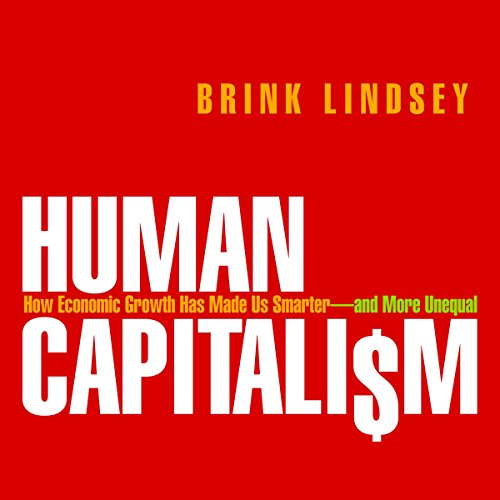 By: Brink Lindsey
Narrated by: Allen O'Reilly
Try for £0.00

What explains the growing class divide between the well-educated and everybody else? Noted author Brink Lindsey, a senior scholar at the Kauffman Foundation, argues that it's because economic expansion is creating an increasingly complex world in which only a minority with the right knowledge and skills - the right "human capital" - reap the majority of the economic rewards. The complexity of today's economy is not only making these lucky elites richer - it is also making them smarter.

As the economy makes ever-greater demands on their minds, the successful are making ever-greater investments in education and other ways of increasing their human capital, expanding their cognitive skills and leading them to still higher levels of success. But unfortunately, even as the rich are securely riding this virtuous cycle, the poor are trapped in a vicious one, as a lack of human capital leads to family breakdown, unemployment, dysfunction, and further erosion of knowledge and skills.

In this brief, clear, and forthright audiobook, Lindsey shows how economic growth is creating unprecedented levels of human capital - and suggests how the huge benefits of this development can be spread beyond those who are already enjoying its rewards.

"Human Capitalism is a compelling and important account of how and why people are being left behind in an increasingly complex economy. This is a 'big think' book that is both deeper and broader than the usual polemical arguments about inequality. Regardless of which side of the political divide you sit on, Lindsey will likely stimulate and infuriate you in equal measure." (Tyler Cowen, author of The Great Stagnation)
"Providing an evenhanded approach to the heated issues surrounding human capital, this is a very strong and unusually well-written book that is also remarkable for squeezing so much into so few pages and making a wide range of scholarship accessible to general readers." (Steven Teles, Johns Hopkins University)

What listeners say about Human Capitalism

Very informative and specific to sway a persons perceptions of the way of civilization coexistence. Remember this just my own personal opinion of the book directions. Positive taught is required before listening.

Good for what it is; but not what I expected

I expected this as a forward-looking bunch of tips on how we might optimize our human skills, intelligence and networks to be successful at wealth-building, in today's tech age. This turns out to be more a disciplined anthropological study of who is successful now, particularly, from one generation to the next. I don't want to over-simplify, but the upshot for me in terms of advice was, &quot;be born in a rich and illustrious family that parents very well, in a great neighborhood.&quot; This obviously results in superior wealth creation and retention. Oh, really? And here are research numbers that prove this crushingly obvious thesis. It is a job well done, and not one I care to see reiterated dozens of quantitative ways.

This is one of the most interesting and well written books regarding the conditions and complexities in our modern society.