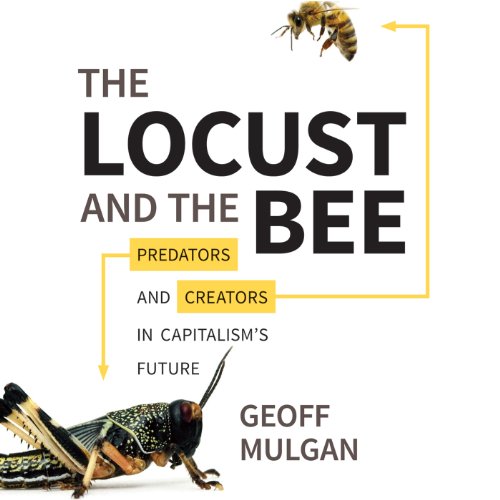 The Locust and the Bee

By: Geoff Mulgan
Narrated by: Mark Ashby
Try for £0.00

The recent economic crisis was a dramatic reminder that capitalism can both produce and destroy. It's a system that by its very nature encourages predators and creators, locusts and bees. But, as Geoff Mulgan argues in this compelling, imaginative, and important book, the economic crisis also presents a historic opportunity to choose a radically different future for capitalism, one that maximizes its creative power and minimizes its destructive force.

In an engaging and wide-ranging argument, Mulgan digs into the history of capitalism across the world to show its animating ideas, its utopias and dystopias, as well as its contradictions and possibilities. Drawing on a subtle framework for understanding systemic change, he shows how new political settlements reshaped capitalism in the past and are likely to do so in the future. By reconnecting value to real-life ideas of growth, he argues, efficiency and entrepreneurship can be harnessed to promote better lives and relationships rather than just a growth in the quantity of material consumption. Healthcare, education, and green industries are already becoming dominant sectors in the wealthier economies, and the fields of social innovation, enterprise, and investment are rapidly moving into the mainstream--all indicators of how capital could be made more of a servant and less a master.

This is a book for anyone who wonders where capitalism might be heading next--and who wants to help make sure that its future avoids the mistakes of the past.

What listeners say about The Locust and the Bee

A work of sustained brilliance

This author compactly, eloquently, I will say at moments, lyrically describes capitalism, its facets, its dangers, its meanings and effects, its penetration into our lives and the meaning we assign to things and live by, its recent developments and its prospects, worldwide and throughout history. In terms of meaningfulness, alongside clarity of explanation and reach of imagination, such that a non-technician can get a great harvest of understanding in a minimal investment of time and effort (and that's a very capitalism-influenced way of describing it), I would rank this author and book in the second rank, all time (the first rank being occupied exclusively by Adam Smith, the second rank including others, many of whom are quoted and acknowledged in this book, such as Schumpeter and Weber). He might be as biased as any human is, generically, but he is in no sense "on a side," or "selling a view," in some partisan way. Here is an amazing synthesis of so much of economics and culture, often held up in lights I had not imagined. In describing these things of great complexity, this author dances through the task. This hasn't been like reading a book, it has been like continuously having my mind opened, continuously being shown new vistas and horizons on things I thought familiar. It is like getting a tour of my own society conducted by some alien from another whole system that understands it better than I do.
If this guy gives a class, writes a book or even puts out a rap album, sign me up.