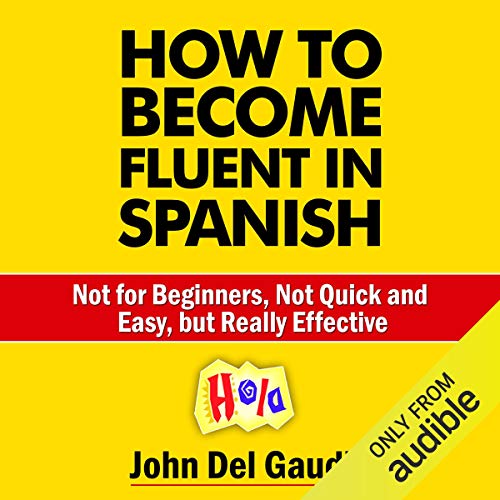 How to Become Fluent in Spanish

Not for Beginners, Not Quick and Easy, but Really Effective (Spanish Books)
By: John Del Gaudio
Narrated by: Matt Stone
Length: 35 mins
Categories: Languages, Spanish
4 out of 5 stars 4.0 (6 ratings)

How to Become Fluent in Spanish

A No-Nonsense Method for Becoming Fluent In Spanish

If you want to become fluent in Spanish, you need more than immersion and Spanish courses. You need a system that works!

If you want to become fluent in Spanish, this book is for you! You will learn:

Most people think you need a great Spanish teacher or immersion to become fluent in Spanish. And while both great teachers and immersion can definitely help improve your Spanish, many students find that typical courses and short-term immersion experiences are not sufficient to become totally fluent. Sorry, but it's just not that easy to attain fluency. It takes dedication and hard work with the right techniques.

In this book, the author recommends a self-training system that will allow you to learn Spanish daily and become fluent much faster by training yourself how to learn. Is it hard work? Yes, it is. But it's what it takes to become fluent in Spanish.

This little guidebook might just save you a lot of time and frustration on your journey to become a proficient and fluent Spanish speaker.

If you're looking for Spanish books on Kindle, this one is for you!

John Del Gaudio received his B.A. in Spanish from SUNY at Stony Brook, and spent his junior year at the University of Puerto Rico studying Spanish language and literature. He has traveled extensively in Latin America and resided in Mexico for four years and two in Colombia. He holds the Basic and Advanced Diplomas de Español como Lengua Extranjera. He is a practicing lawyer in Chicago, Illinois, and has been at translator of Spanish legal documents from time to time.

If you would like a little guidebook that will save you a lot of time and frustration on your journey to become fluent in Spanish, this is it!

It teaches what is obvious and wastes time . False pretences. In addition, it’s boring.
The sales pitch is misleading.

Yes, I would definitely recommend this audio to anyone learning Spanish (or any other language for that matter). Most of the tips are just common sense, but sometimes you just need someone else to to tell you what you already should know.

Contains basic ideas that, if you're a serious learner, you've already figured out. Nothing new.

A solid plan to become fluent.

in school i learned lists of spanish just as indicated here and it worked well. i will use the verbaluzation of text to loosen my tongue.

Short, but to the point.

I found this book very helpful. I'm really just a beginner, but believe that the method he describes will be very helpful to me. I'm planning to purchase the book he recommended, by another author, as well. I really, really want to be able to speak, and understand the Spanish language.

Not Easy but Simple

The book gave me a few things that I had not thought in my quest to become fluent in Spanish. Great Book! Thanks

One-sentence summary of this title

Translate classic fairy tales into Spanish and study everything you get wrong.

This might be a good strategy with fiction or nonficton that doesn't use archaic language or have fantastical plots. I don't expect to be in a conversation about mythical she-wolves anytime ever. But if that sounds like something you'd enjoy, I'm pretty certain these stories are in the public domain and can be obtained for free with a Google search.

no help at all waste of time should what shi#