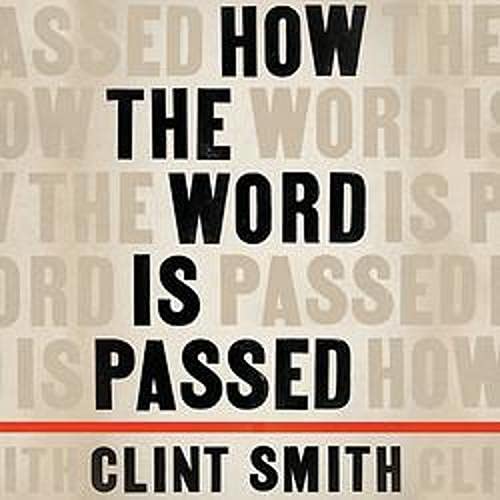 How the Word Is Passed

Beginning in his hometown of New Orleans, Clint Smith leads the listener on an unforgettable tour of monuments and landmarks - those that are honest about the past and those that are not - that offer an intergenerational story of how slavery has been central in shaping America's collective history.

A deeply researched and transporting exploration of the legacy of slavery and its imprint on centuries of American history, How the Word Is Passed illustrates how some of America's most essential stories are hidden in plain view - whether in places we might drive by on our way to work, holidays such as Juneteenth or entire neighbourhoods like downtown Manhattan, where the brutal history of the trade in enslaved men, women and children has been deeply imprinted.

A number one New York Times best seller, How the Word Is Passed is a landmark book that offers a new understanding of the hopeful role that memory and history can play in making sense of the United States. For anyone who loved Hamilton but wanted to know more and fans of Brit(ish) and Natives.

"A beautifully readable reminder of how much of our urgent, collective history resounds in places all around us that have been hidden in plain sight." (Afua Hirsch, author of Brit(ish))

"A beautifully written, evocative, and timely meditation on the way slavery is commemorated in the United States.'" (Annette Gordon-Reed, Pulitzer Prize-winning author)

"How the Word Is Passed frees history, frees humanity to reckon honestly with the legacy of slavery. We need this book." (Ibram X. Kendi, number one New York Times best-selling author)

What listeners say about How the Word Is Passed

Clint Smith’s writing is a beautifully brutal gut punch that left me dumbfounded. He is consistently sincere and yet never crosses the line into sentimental. The structure of the book keeps a pace which never feels dragging or rushed. The content is well researched and presented with authority and inarguable insight. All I want now is more of his work. It feels wrong to say I enjoyed a book like How The Word Is Passed. Instead I will just say that I feel enriched having heard it and reminded that as with all history we are intrinsically interconnected and must always strive to confront and understand our past to better our future. Thank you Clint thank you very much

Thank you for creating this book Clint. You've given me a deeper perspective into the

This is something everyone should read, we need to know this to understand today.

Powerful, poignant and inspiring; it opens the heart and mind. Clint's words have wings.

I have realized that I have very little understanding of this critical aspect of the US or even world history. This is the book must be read, and extremely useful to get perspectives for BLM and other important movements.