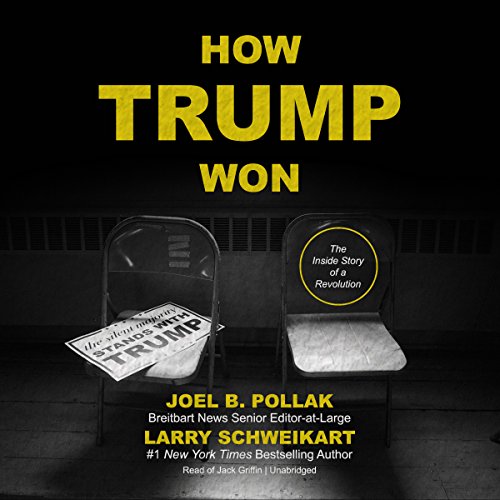 By: Joel B. Pollak,Larry Schweikart
Narrated by: Jack Griffin
Try for £0.00

From the moment Donald Trump announced his candidacy for the White House until very late on election night, media and pollsters kept insisting Trump wouldn't - couldn't - be president. But for Larry Schweikart - one of a ragtag group of amateur politicos called the "Deplorables", who had been publishing shockingly accurate polls and predictions, and Joel Pollak, a senior editor at Breitbart News following Trump on the campaign trail - Trump's 2016 win was a near certainty. Schweikart and Pollak watched the Trump campaign build a powerful coalition of working Americans from both parties; they saw the momentum that the mainstream media and pollsters completely missed. Now, in How Trump Won, they tell the whole incredible story, from the early poll predictions to the campaign trail and on to election night.

What listeners say about How Trump Won

Republican clap trap. A deluded view of the election of the worst president in history.

OK but disjointed and repetitive.

A little disjointed and the the countless journalist reports from Trump campaign rallies feel repetitive.

Still, a decent listen overall, and some great insights into Trump's rise to the Presidency, though I preferred Jonathan Allen and Amie Parnes' Shattered: Inside Hillary Clinton's Doomed Campaign, and Doug Wead's Game of Thorns.

If you've enjoyed to those two, you'll enjoy How Trump Won too.

excellent overview of the 2016 election and highly entertaining back stories on how the Trump Campaign pulled off the biggest upset in Political history!!!

I'm not into politics but

This is a very entertaining book. Usually when you have two authors you only hear one voice. Instead you get to hear both authors separately talking about the same story from two different perspectives. Given the highly unusual nature of the 2016 campaign this is a very good way to get the true sense of the enormity of the event. Enjoy!

A compelling, professional account of how a non polished, candid, non politician toppled the GOP Presidential Primaries and smashed through the Democrats Blue Wall for winning the Electoral College.

How has the book increased your interest in the subject matter?

Reading about Hillary Clinton's disastrous miscalculations with the American people.

Does the author present information in a way that is interesting and insightful, and if so, how does he achieve this?

Donald Trump turns out to be a huge historical GOP upset legend.

What did you find wrong about the narrator's performance?

Great insight into Trump's election victory. Highly recommend read for everyone who followed the election.

What a great book to re-live the 2016 elevation and get the inside scoop! I was turning pages like this was a thriller!

Full of pro Trump propaganda. The book is full of rubbish lies and not intelligent! Don’t waste your time on this book.

I really enjoyed the inside story to the shocking upset. However if I could give the narrator an honest rating it would be in the negative. I genuinely hate giving narrators bad reviews but he ruined it with his inflections and snarky reading of this book.

Epic behind the scenes details of the most controversial and unpredictable election in my lifetime. It helps explain why this was the most exciting presidential bid, probably in history.

This is one of my favorite audio books. It tells the story of how Trump crushed CROOKED on the best ELECTION DAY in the HISTORY of the WORLD!! Don't miss this one.. Awesome!