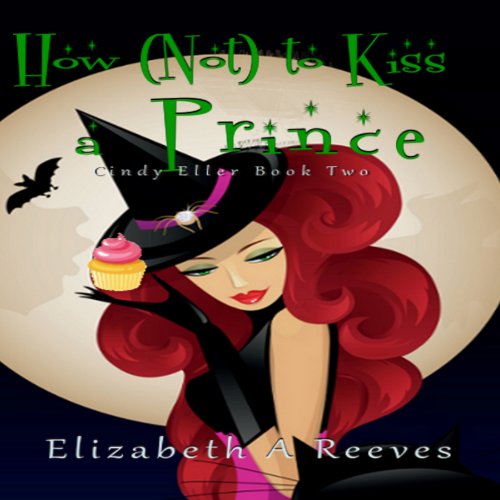 How (Not) to Kiss a Prince

By: Elizabeth A Reeves
Narrated by: Michele Carpenter
Try for £0.00

Let the Magical Mayhem begin! Cindy Eller has not one, but two weddings to prepare for in less than two weeks when the cupcakes hit the fan - a mysterious man has appeared, claiming to be betrothed to Cindy and that she must marry him before her sister's nuptials can take place. Obviously this doesn't sit well with Cindy's Ordinary boyfriend, Timothy. That's the way to cake - and the wedding - crumbles!

What listeners say about How (Not) to Kiss a Prince

This is a fast moving heavy on the food, very sweet story. The narration is excellent, and lots of magic.

Yes, it was funny and engaging.

What was one of the most memorable moments of How (Not) to Kiss a Prince?

When Cindy used her powers to send Prince Justice into a cactus patch.

Ever hear of Murphy’s Law: anything that can go wrong will go wrong? Well, for someone like Cindy Eller, her life is practically a living example of Murphy’s Law. Lately, everything has been perfect. She has a wonderful ordinary (non-magical) boyfriend named Timothy, her bakery is doing well, and her magic, limited though it is, is mostly behaving itself and no longer turning men she kisses into toads. She shouldn’t have spoken so soon, however. When a prince from the Middlelands shows up at the bakery claiming to be her betrothed since before she was born and says Cindy’s younger sister can’t marry until they do, everything starts going downhill. Too bad this prince just won’t turn into a toad when he’s kissed. When she confronts her mother, she discovers that she bargained for her eldest daughter to marry said prince in exchange for a two-way ticked to Fairy. After returning, she discovered she was pregnant with a Fae’s baby and blocked Cindy’s magic, but that’s all she will tell her. To make matters worse, Cindy’s newest employee, a former cupid named Sumac’s magic is going haywire and making everyone fall in love with the desserts from Cindy’s shop. Will Cindy find a way to become un-betrothed? Will she survive two weddings in two weeks, a really busy shop, and figuring out the truth about her past?

Narrator, Michele Carpenter is a unique, funny, entertaining narrator ideally suited for this book. Although the narration was a bit choppy in the beginning, her use of different voices quickly draws the reader in and helped to distinguish and bring to life the well-developed characters. The plot is well-developed, fast-paced, and keeps the reader laughing from start to finish and the narrative does a great job of keeping pace. Transitions between action, humor, and internal dialogue are masterfully done. I especially liked the addition of songs at the beginning and the end of the book that the narrator created. It would have been nice to have a bit more drawn out of a conclusion, but the ending was satisfactory and leaves the reader wanting to further follow Cindy's adventures. Although it is recommended that listeners listen to How (Not) to Kiss a Toad first, it can be listened to out of order. This funny, lighthearted novel will appeal to humorous fantasy fans everywhere.

a quirky and fun series with plenty of characters

My second contact with a story in this series and it was as quirky and clever as the first! Cindy Eller is a witch who successfully can channel her magic into her baked goods: although she is still having issues with managing it in other ways. In the first book, every man that Cindy got close to turned into a toad – yes a toad. And despite that hiccup, her current boyfriend, Todd, was willing to give it a chance.

But this is all about Cindy’s discovery of her unknown betrothal to the Prince of the land in the middle – between the here and the otherworld. Aside from giving her a particularly quirky name, Cindy’s mother has been keeping several secrets from her, even binding her magic which has resulted in several mishaps, the toads being the least of them.

Again Reeves manages to present wholly unrealistic situations in a funny and relatable way with characters that you cannot help but enjoy and root for. With a new pixie-like assistant that is a former cupid to help with the baking, and a never-ending barrage of delectable treats and Cindy’s solid narrative voice, the story manages to keep you intrigued and interested. Plenty of giggles and some laugh out loud moments from the clever word play and use, this is a fun series that is suitable for YA and adult readers alike.

Narration for this book was provided by Michele Carpenter, and for her first narration I thought she did a marvelous job in defining voices and delivery styles for her characters without over-emphasizing or exaggerating their differences. While her pacing was a bit uneven early on, she did manage to find a comfortable delivery speed that enhanced the story. Her voicing for Cindy was spot on for the character, adding the proper amounts of sarcastic twinge, self-doubt and confusion when the moments called for it, and I look forward to more from her.

This is a quirky and fun series with plenty of characters to enjoy and a wonderful heroine in Cindy/ A touch of romance that stays in the very sweet and clean zone, and a story that manages to not delve into expletives, this is appropriate for adults and teens, with a nice twist to the standard witch stories.

I received an AudioBook copy of the title via AudioBook Jukebox for purpose of honest review. I was not compensated for this review: all conclusions are my own responsibility.

I really enjoyed the lead character of Cindy. She is a determined woman and doesn't want to be told what to do. Her mother made a promise as a young girl and because of that Cindy is the one that has to fulfill that promise. I liked the way Cindy thinks and how she resolved that problem.

I would love to have had the time to listen to this in one sitting but alas I couldn't. If you stopped it after a chapter it was very easy to get right back into the story when you came back to it.

Ms. Carpenter also wrote and performed a beautiful song that was played at both the beginning and the end of the recording. I would love to hear more of Ms. Carpenter's work.

A witty and entertaining read

Yes I would listen to How (Not) to Kiss a Prince again because it was an fun and enjoyable read. The characters were unique with the voices for each character spot on. The recipes that Cindy cooked up were mouth-watering as she described each one. It was very imaginative and took unexpected twists that kept me listening. The hours flew by while I imagined myself as Cindy in her world. I did not want it to end.

I like the plot twists, and the characters were so life like and loveable. I was cheering for Cindy and her struggles throughout the story.

Have you listened to any of Michele Carpenter’s other performances before? How does this one compare?

No I am sorry that I haven't because she did a wonderful job.

Yes this is a book that I would want to listen to all in one sitting because it was funny and kept me on the edge of my seat the whole time wondering what was going to happen to Cindy next and where this was going to take her.

This book was funny and witty. It brought me a lot of enjoyment and was a great listen. There was magic, humor, excitement, love, and a great plot. What else could a person ask for?!

No, I'm not one to re-read/re-listen to most stories.

Cindy. I felt a kinship with her on some level, and I wanted her to come make some desserts in my kitchen.

Clear, easy to understand. She made the characters come alive with their individual voices without sounding cliche or cheesy.

I was provided this audio book for free in exchange for an honest review. My opinions are my own.

This is not a title I would have been inclined to pick normally, but I found it very enjoyable. I looked forward to any opportunity that arose so I could listen more and see what happened next. I enjoyed the whimsy injected into the magic descriptions, particularly the part about the "strings" of magic that Cindy could see. I enjoyed the dessert descriptions, and will likely try to find some recipes that sound similar to the author's descriptions. Overall, this is a fun, light, enjoyable tale that may lead me to purchase the other books in the series to see what happened first/next.

I loved the book's description of all the treats!

The description of all the pastries made me feel like I was there, tasting all of the sweet treats. I really liked the book and hope that there will be a book 2 I can listen to in the future!

This story was sweet and fun to listen to and I enjoyed it.
"I was given this free review copy audiobook at my request and have voluntarily left this review."

Very enjoyable and entertaining story. looking forward to the rest of the series.

A chirpy, easy to listen to book. Life can be so serious so it's great to find an authoress with such a lively sense of humour.
Loved this witchy story and the narration was nicely done.
Am keen to read/listen to more by this storyteller.

What made the experience of listening to How (Not) to Kiss a Prince the most enjoyable?

Michele's narration and accents give all the characters flair. She does a great job.

What was one of the most memorable moments of How (Not) to Kiss a Prince?

When the prince kidnaps her because he read a romance novel and thought it was considered romantic. Bwuahahaha.

Are you a foodie? You'll love this.