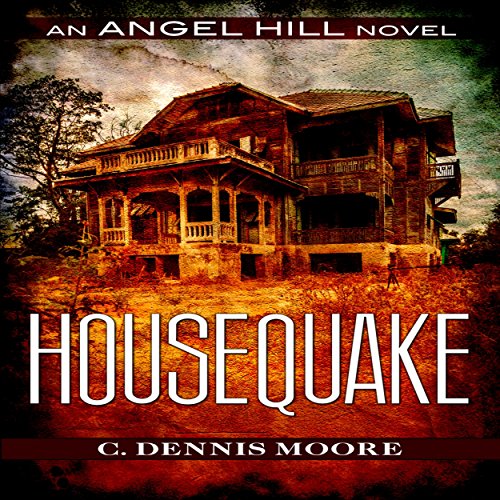 By: C. Dennis Moore
Narrated by: Curt Campbell
Try for £0.00

Oliver Mark has found the perfect house. Old, abandoned, on the outskirts of Angel Hill where no one lives - it's the perfect place for him and his girlfriend to make a life together. But when Oliver breaks into the place to explore his new treasure, he finds himself lost in a maze of confusion and spatial anomaly.

After losing his job and getting kicked out of his friend's house, Oliver just wants a place to build a new life, but this house wasn't constructed using the physical laws we all take for granted. Some rooms are far larger than they should be; one room tricks him into thinking he's outside, and several others make him confront his biggest fears.

Housequake is the latest tale from the most haunted place in America, where nothing Oliver sees can be trusted, and not even an open door offers the hope it once did. As he faces madness, despair, and terror on a level he'd never imagined, he has to focus on just one goal: getting out of the house before he finds himself trapped there forever.

Either way, one thing is certain: Neither Oliver nor the listener will ever look at a closed door the same way again.

What listeners say about Housequake

I've loved CDM's work for a few years now and I've read everything he's published. Housequake is a welcome edition to the ever building, Angel Hill saga. This author just has a unique style that's all his own. More Angel Hill couldn't hurt, Mr. Moore. I've also listened to a lot of Curt Campbell's audio work. I really like this narrator. He's someone I can listen to for long periods. I like his voice distinction for the different characters. Some other reviews suggested that the narration on Housequake has an echo. I really couldn't hear any echo. Print or audio. I recommend either or both. If you haven't taken steps to do so already, I'd certainly find out more about C. Dennis Moore.

I enjoyed the story and the narration was okay, but the low quality of the recording was bothersome.

Would you listen to Housequake again? Why?

Yes. I really enjoy the Angel Hill series and have listened to the books more than once. This book is another great book in the series and I will definitely listen to it again.

Yes, it is very interesting and I wanted to find out what would happen next.

I felt like this book was a bad knock off of Clive Barker's "The Thief of Always." I suppose someone will enjoy it. I'll admit I enjoyed "The Third Floor" by C. Dennis Moore.

Probably the Neil Gaiman item in my library

The performance sound quality was bad. It sounded like the narrator was speaking into a loud echoing hallway. He also mispronounced words, which made me cringe inside.

Annoyance and disappointment. It wreaked of Barker's Holiday House setting, but not in a good way. The Thief of Always is one of my favorite books, but Moore's character Oliver is definitely not on par, at any level, with Barker's Harvey Swick.

If you want a more enjoyable story, read or listen to Clive Barker's The Thief of Always.

It was okay. I was not fond of the narrator's voice. The author could have ended the book by also telling how much time passed when they finally made it out of the house.

This was my first Angel Hill Novel and I really enjoyed the story. Well written and a fun little adventure to go on.
It's unfortunate the narration is so bad. I can think of a good number of narrators that would have done a fantastic job with this book.
Narrators such as... Scott Brick; James Foster; Ray Porter; William Dufris; Bronson Pinchot; Tom Weiner; Michael McDowell...
Curt Campbell's voice is acceptable. He does a fine job on his different voices for different characters and he's a decent narrator... BUT... this book sounds as if it was recorded in a cave. If you listen to the sample of the reading it's obvious there, this is what you get for the entire reading. There is a terrible hollow, almost echo sound that really takes away from the storyline. It's hard to sink into the story because of this.
Honestly, for my money I expect way more from Audible than this sort of low quality recording.

The story is good ,however the narrator is bad I struggled to finish this book because of his voice .The narrator sounds like he's just reading bad performance .

Narration had a bad echo