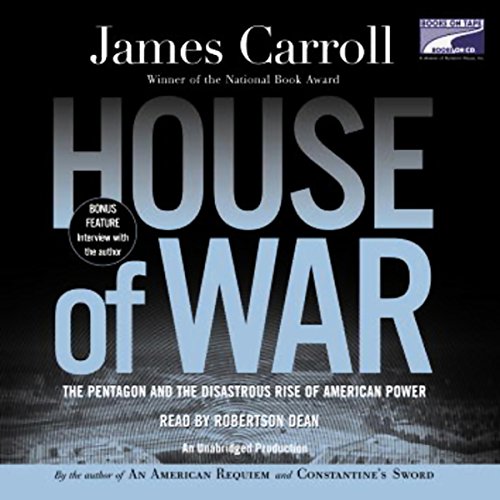 The Pentagon and the Disastrous Rise of American Power
By: James Carroll
Narrated by: Robertson Dean
Length: 26 hrs and 28 mins
Categories: History, Americas
3.5 out of 5 stars 3.4 (13 ratings)

This landmark, myth-shattering work chronicles the most powerful institution in America, the people who created it, and the pathologies it has spawned. Carroll proves a controversial thesis: The Pentagon has, since its founding, operated beyond the control of any force in government or society. It is the biggest, loosest cannon in American history, and no institution has changed this country more.

To argue his case, he marshals a trove of often chilling evidence. He recounts how "the Building" and its denizens achieved what Eisenhower called "a disastrous rise of misplaced power" from the unprecedented aerial bombing of Germany and Japan during World War II to the "shock and awe" of Iraq. He charts the colossal U.S. nuclear buildup, which far outpaced that of the USSR and has outlived it. He reveals how consistently the Building has found new enemies just as old threats and funding evaporate. He demonstrates how Pentagon policy brought about U.S. indifference to an epidemic of genocide during the 1990s. And he shows how the forces that attacked the Pentagon on 9/11 were set in motion exactly 60 years earlier, on September 11, 1941, when ground was broken for the house of war.

Carroll draws on rich personal experience (his father was a top Pentagon official for more than 20 years) as well as exhaustive research and extensive interviews with Washington insiders, from Robert McNamara to John McCain to William Cohen to John Kerry. The result is a grand yet intimate work of history, unashamedly polemical and personal but unerringly factual.

"An aggressively compelling history." (Publishers Weekly)
"Certain to be one of the most-talked-about nonfiction books of the season." (Booklist)

What listeners say about House of War

An authentic voice, a treasured companion

This book begins with a son's view of a father, a General seconded from the FBI, responsible for keeping the peace in a fascinating internecine conflict between airforce and navy to control the bomb. Carroll discusses the history and implication of mechanised mass destruction. He talks to those who saw it emerge, those present at its beginning, and they are candid about its psychological impact. We are introduced to its inheritors, we are warned. Carroll's authority compels us to grasp its meaning. This sits beside Catch 22 as treasured companion. It's a warm and resonant reading by Robertson Dean. I've listened to it three times already and I anticipate listening again.

Detailed and passionate story??? I do not know. History of American military complex seen trough prism of catholic/Christian and Hippy philosophy (with lot of personal guilt) could be still quite informative. Unfortunately misleading interpretations of some facts and processes, omitting some facts and processes to nicely wrap up the whole story, make me doubt the factual basis for the book. What we are left with is: ?bad, bad America and god, kind-hearted USSR/Russia?. What a crap!!!!

I enjoyed the House of War very much. It is certainly a long listen, but it managed to keep my interest throughout.
Of course, while the ideas contained within represent a leftist viewpoint (as the author readily admits), his insight into Truman's decision to bomb Japan and the concept of "dehousing" industrial workers is really worth a listen.
I think his view of the Cold War is a bit one sided. He seems to suggest that all Soviet behaviour was based reactions to American paranoia and ignorance.
Overall, this is a well researched, well presented book.

James Carroll will make a lot of people uncomfortable with this book. His portrait of the Pentagon is not flattering. However, the scope of the story is wide, thorough and told from a unique perspective; that of a boy growing up in a military family that was intimately connected to America's military establishment. Carroll's portrait of Curtis Lemay is revealing and surprisingly sympathetic. To me, this is one of the strengths of the book; the Pentagon is shown as a collection of people, torn by myriad forces and loyalties. As a Canadian, I've always been curious about the enormous impact that mandatory military service has had on many generations of Americans. Despite my liberal leanings and a mistrust of things military, I've always been impressed by the fierce loyalty that our American friends display towards their troops. This book beautifully describes the military culture, warts and all. You could build an American history course around this book.

As a Marine Officer, Carroll has opened my mind to new ways of viewing Military History! In an effort to understand our current conflicts, I’ve listened to and or read at least 10 books on 911 and the “War on Terror” from many points of view. House of War is simply the BEST,…Period. It’s a documented history of the real defining issues of our times, the Pentagon’s Power, and the Military Industrial Complex’s justification for existence through an “enemy.” This is a must read for every American, but especially those of us born in the aftermath of the A/H bombs, who’ve sworn to defend the Constitution of the United States against all enemies foreign and DOMESTIC.

Although not mentioned by Carroll, his book brings clarity to the similarities between Operation Northwood and 9/11. We must do something to stop this beast from Hell’s Bottom!

Do you want to take a peak behind the curtain of American power? Buy this book. It is not a rant or scandal-rag. This book reads like a handheld movie camera from 1945 on. I felt like I sat in the Pentagon hallways as American bureaucrats of every era stormed by me...tasked with saving the USA and possibly the world. This book is not set along party lines, but has the refreshing feel of an outsider, like us, on the inside, with them. It centers on two basic conflicts. 1) How do smart men REALLY tackle the modern puzzle of a managing a military which is obsolete in a war of nuclear weapons and, 2) that Presidents come and go, but the institution of Defense endures with its own bleak wisdom and breathtaking momentum.

This book will help you will come to respect our past presidents and administrations, even if you do not agree with them. Our age and our leaders have a challenge with ONLY imperfect answers and we are all under their umbrella. Scary. powerful. Great book.

Well Written from the Heart

This is one of the best history/memoir books written in the last decade. An intimate knowledge of this book and its implications and insights should be required of all our so-called representatives in Congress, now and in the future.

Carroll's House of War is part personal memoir, part institutional history. It succeeds beautifully on both levels. It is never angry or indignant, but nevertheless leaves you with a disturbing sense in the pit of your stomach that an out-of-control Pentagon is undermining our country's democratic institutions and values. Carroll's writing is first-rate.

This was a wonderfully written book. Carroll's meshing of the big story and his own personal story was fantastic. There are no boring or slow parts of this book. Robertson Dean is the absolute perfect choice of narrator for this one. The reason I give the book 4 instead of 5 stars is that Carroll is almost laughably one-sided in his take on the Pentagon and American foreign policy. He makes a number of great arguments that really are damning against the US and the war machine. But he makes an equal number of arguments that are just really difficult to buy. For starters, the idea that Japan had virtually surrendered when the bomb was dropped is ludicrous. But there are many other examples. So that's what kept me from going 5-star.

It seemed to me that the author, an ex Vietnam war protester and failed priest, had long ago established his conclusions about the ‘disastrous rise’ of American power. He then looked for those facts that support these conclusions, ignoring all others. He portrays the Soviet Union as the good guy throughout the cold war and it was only the aggressive red-baiting American politicians and military leaders who were the real authors of this protracted struggle. If you’re looking for a balanced historical account of this topic, this is not the book for you.

This book is history as lived in and lived through, told by the son of longest tenured director of the Defense Intelligence Agency. There is human drama, tragedy and paradox on every page. There are startling revelations of the falsity of fearmongering claims and there even more startling relevance to the fearmongering of today. And there are the levers of power, the industrial war machine. You might say, Carroll reveals "strange shapes of the primal world", as Melville might have said.

This book was alot of wind. Very long, much longer than I think it really needed to be . However the history of the Pentagon I found to be very interesting.