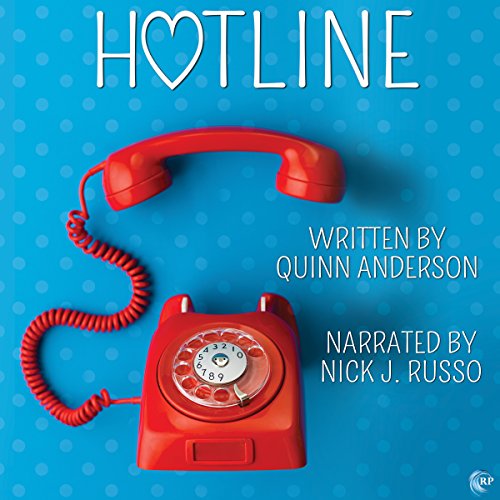 Zack never intended to become a phone sex operator, but with half a college degree and a smart mouth, his options were limited. It helps that he has a knack for thinking on his feet and a willingness to roll with whatever his clients throw at him. Sure, he gets his fair share of creeps and unconventional requests, but it pays the bills, and he's in no danger of breaking his one rule: never fall for a client.

Until a man named "John" starts calling, and Zack finds himself interested in more than a paycheck. It's not just that John has money, or that his rumbling baritone drives Zack wild. He's everything Zack isn't: educated, poised, and in total control of his life.

A twist of fate brings them face-to-face, and now that they've seen each other - and spent an unforgettable night together - they can't go back to the way things were. A sex worker and a trust fund brat... It's like Romeo and Juliet, but with less stabbing and slightly fewer dick jokes. Hopefully they can pull off a more successful ending.

What listeners say about Hotline

First off, I love Russo. He could read the dictionary and get me engrossed. Always brings characters to life with a lovely reading voice. I am new to the author though and while I was a tiny bit disappointed with this I would definitely read another of theirs. The story has a lovely easy going pace with an air of domesticity and everyday life that I liked. Very refreshing. It was fun and easy to listen to particularly with this narrator. Where I think it lacked was that we had this slow build, which again I like and probably the dramatic or intriguing portions of the characters only really got introduced in the last hour? It ended up feeling like a very top heavy story. If there had been another hour or two with us seeing the characters developed more, like some sort of conclusion or even a hint of one with Zach's parents or a little glimpse of John's background it would have balanced out better. As it was you are left sort of like you've been built up for some interesting development and it ends? So yes, very top heavy story but a lovely easy read/listen and I will listen again and look for more of the author. Also needs to be said again, Nick J Russo - always recommend.

This was really good, first time hearing a story about a phone sex worker. Took a couple of hours befor John and Zack actually meet, but the phone sex was both sexy and funny so I didnt mind. Loved Zacks friends and co-workers, they really added more charachter to the story and the romance between Zack and John was really cute with just enough drama to make this a really enjoyabell book!
Nick really was perfect for this story, his voice is just amazing and he made this good book great! Really recommend it!

I am going to caveat that I am writing this review when I am only a little over half way through the book. I have always loved Nick J Russo’s voice and his narration of the super steamy scenes written by Quinn Anderson in this book so far is just... well, super hot and worth listening. The story is written from Zach’s point of view so you don’t know as much about John but I like both characters along with Zach’s friends.

This was a really good one, sexy , hot ., low and in angst.
Superior narration. It held my attention for sure...great sexy storie narrated magnificently.

Great performance for a good story

As many audio books that I’ve listened to by Nick J. Russo, one would think that all of the storylines and characters would start to meld together…but they don’t. Nick is an amazing narrator and I have never listened to one of his audios where I was not invested and totally impressed with the performance. In this case, Nick plays with fire as a sex phone operator (SPO), and I have no doubts that he could easily find himself a part-time job as a SPO if he ever wanted to make a couple extra dollars.

Zack struggles to gain his family’s approval so admitting that his job is as a SPO is not an option. What is also not an option is getting turned on by, and wanting more, with a client. In this case, Zack, also known as Mr. Darkling, is intrigued by John. There is just something about John that resonates within him and he can’t stop thinking about him, nor getting disappointed if he doesn’t call in. What is not expected is actually running into the man in real life.

John and Zach have a connection but paying for phone sex, and performing a sexual act over the phone, was always meant to be separate from real life. When Zach and John meet they struggle a bit at first, which is very much expected, but that connection is just too real. Now they just have to work their way through all the landmines in their way.

I totally enjoyed this story, and I especially loved the narrator’s performance of John. His voice was silky smooth, and it was no wonder that Zach fell for him, because I did too.

Great main characters, entertaining and lovable supporting characters, and a unique romantic plot. What's not to love? With half the sex in the book being over the phone, it was different than what I'm used to, but totally worth the money.

Also, Nick J. Russo is a new favorite reader, best sex voice I've heard yet in addition to his already amazing performance throughout the rest of the book.

Give this book a shot! I'm sure you won't regret it.

I just heard about this series a couple days ago and started reading the book before grabbing the audiobook. Nick J. Russo could not have been a better pick for this story because he’s exactly what I imagined Zach would sound like! This story isn’t exactly my cuppa—I try to stay away from contemporary/new adult romance—but the premise was interesting and hello: Nick J. Russo. BUT, I did listen to the whole thing in one sitting and thought it was a well-written book. I’ve never been a phone sex person and I will admit it was just as awkward listening to someone else’s phone sex as I thought it might be. And there’s a lot of that—there isn’t real man on man contact until almost halfway through the book. Those are just my opinions, though, and I won’t fault the author for it because it really was a well-written book overall (and had more than adequate steamy times). I can’t imagine this being a re-listen for me (which is one of my greatest joys), but I might finish the series in book form at some point.

Talk dirty to me

I loved it. Scorching hot dirty talk. Just wonderful. I didn't like what John did. It really made me like him less. Great narration by Nick J Russo. Very sexy voice.

This was exactly as sweet and fun as I hoped. If you need a book to get you out of a reading slump, Hotline is it! Definitely recommend it!

Not as funny as I thought or different

My expectations for funniness may have been too high, but I chose it based on the excerpt, which seemed funnier to me than most of the story actually was.
This is a story of college drop-out and PSO (phone sex operator), Zach (aka Wesley Darkling), and phone sex caller, John, a wealthy law student. Naturally, both were beautiful, buff white men in their 20s. Overall, my enjoyment of the story was quite minimal. But it was fun trying to figure out how and when they would meet. The story had cute dialogue a few times but not exactly funny. And Zach's group of friends, 2 fem & 1 straight guy, were fun. So much of it is M/M sex scenarios played out on the phone, which I tired of. They were quite sexy; the author has an adequate affinity for writing sex scenes. It's the rest of the writing.
After the sex moved off the phone, the trajectory of the story changed. And I liked that half of the story more, though it was never a story I was drawn too or sought out. I was ready to get it over. The conflict in the story was real and due to an unexpected reason, which was a good unexpected bend. And the story is not wrapped up too prettily, which was more realistic. I wish we heard other PSOs to get a real sense of Zach's workplace beyond encountering his boss. It just would've added to a wider view of Zach's life, since so much of the story centers on his job and workplace. Zach and John grow during the story, which was a plus. Still, I won't see out this author again.
The narrator seriously rocked especially all the sexual sounds and verbal expressions. He bounced well among all the male and female characters.

First half was great!

Spoilers!
I really liked the phone sex and dirty talk. It was super steamy! But just a warning that there is cheating. I personally didn’t like the whole situation or the book after that, but I will definitely re-listen to phone sex scenes and just pretend that John didn’t call another PSO less than 2 hours before he was going on a date with Zach. Ugh.