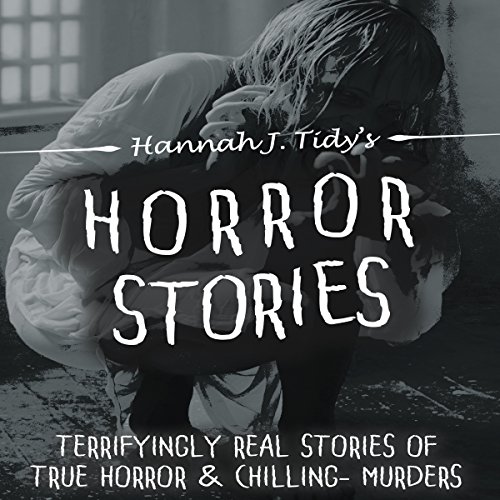 By: Hannah J Tidy
Narrated by: Martin James
Try for £0.00

Imagine getting out of the bath and finding blood in four of your six rooms.

That’s not the plot of a B-movie. That’s real life. There’s a reason you’re drawn to horror films, and they’re not as far-fetched as you thought.

FBI data shows that four out of 10 homicides and six out of 10 rapes go unsolved, and this isn’t just down to shoddy police work or a failing system. Sometimes, there just is no rational explanation.

Strange things happen every day, and many of them are never reported. But then, many of them don’t end in horror. Some do though, and these are the terrifying true stories that have inspired countless horror movies and thrillers.

We tell stories because we want to make sense of the truth. Sometimes, though, the explanation defies rational thought.

Get ready to delve into terrifyingly true tales of crime and horror, look over your shoulder. Are you really alone?

I really enjoyed this book! What an awesome look into the world of strange. Quite an eye opener for me and definitely given me food for thought. Would like to hear more 😊

Although interesting, these stories fall short of what I would consider true horror stories. The narrator was almost robotic in his telling of the stories lacking anything that remotely sounds like emotion.

This was an okay collection of real life horrors, some easily substantiated while others can only be speculated on due to being handed down. If you enjoy hearing this type of stories then you're sure to like this collection. The narration was done well.

These were great horror stories

There were so many good horror stories in this collection. From murders to disappearing to the unexplained from hundreds of years ago all the way up to the past 15 years. The collection is not super long and the stories are all 8-20 minutes in length so you get a good bang for your credit as far as quality and number of stories. Hannah Tidy does a great job in bringing this collection together and Martin James is a good narrator. I was provided this audiobook at no charge by the author, publisher and/or narrator in exchange for an unbiased review via Audiobook Boom.

An eerie collection of real life tales of horror

This is an eerie collection of real life tales of horror. Ranging from the bizarre to the truly bone-chilling, these stories will keep you up at night if you listen before bedtime. This is not a book for young children.

The stories cover many decades. While some of them may be a bit hard to believe, if you check your skepticism at the door and go along for the ride, you'll find this audiobook genuinely thrilling.

The narrator is very good and keeps the stories flowing at a nice pace.

Recommended listening for all fans of horror and suspense!

*I was given a free review copy of this audiobook at my request and have voluntarily left this review.

If you are a fan of true horror, you will recognize many or all of these stories. Just as stated in the introduction many of these stories can be found online as well. Much of the stories sounded as if they were looked up online and then repeated in this book. These stories were not terrifying, and the collection was interesting if you are new to this genre but if you are an avid fan, these are all stories you are familiar with. These stories are short and concise like short reports, nothing that is overly scary as the title states. Narrator Martin James moves the stories along at a good pace and kept me involved in the stories.
I received this audiobook at my request, and I voluntarily wrote a review.

This book did exactly as I intended for it: I listened to a story about a crime while driving. The stories were interesting and short enough to hear the whole story without a lot of time invested into characters and plot lines.
The stories were entertaining but I already knew about 1/2 of them prior to this book.
If you are looking for decent short stories to entertain your commute times, this is a pretty good choice.

Love these stories 💝 they flow and are not choppy like some books can be.