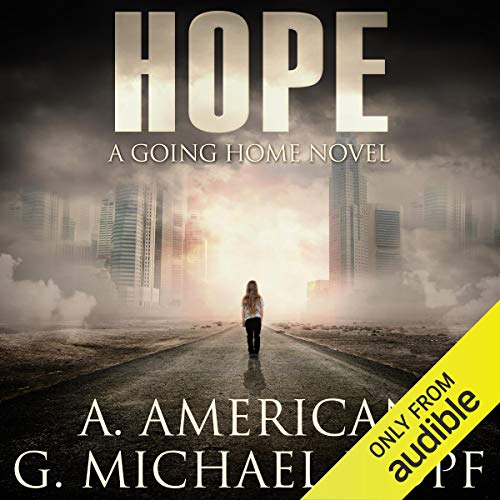 By: A. American, G. Michael Hopf
Narrated by: Joseph Morton

Neal managed to survive the initial weeks after an EMP decimated the grid and all critical infrastructures. Using his cunning, skills, and mindset, he navigated the harsh new landscape. Life became harder when the weeks turned to months but still he survived. As he settled into his new normal, complacency set in with it. At first everything was fine, but then the deadly realities came to his doorstep. When tragedy struck all he wanted to do was give up, but a promise he had made kept him going, barely. He was a man without a home, a purpose, and, more importantly, hope. That changed one day along a desolate highway in the desert. There he'd discover a new reason for living.

What listeners say about Hope

decent but not as good as usual

story lacked action and did not have me on the edge of my seat. compared to both authors usual books this one was tame and not their best. nothing terrible happened with little emotive connection. bit disappointed.

What would have made Hope better?

What was most disappointing about A. American and G. Michael Hopf ’s story?

Would you be willing to try another one of Joseph Morton’s performances?

What character would you cut from Hope?

I purchased this book because I have listened to all of the Going Home Series from A. American. However, I this he only lent his name to this book and had nothing to do with its writing. I normally don't write reviews but this book is so bad I had to say something. There not a single good thing I can say about this book.....

I have to admit I knew the book length when I bought it. Still, why no more story then what we get? I obviously like it since I want more. The character development is excellent. A reader makes an informed decision about liking or hating the people in this book.

This is about average people and how they react to an apocalypse. They make a lot of mistakes - some that are fatal. The language is rough compared to other works by these authors.

Without a spoiler, the FEMA/military actions are bizarre. I expect an explanation in a future book.

Now the bad. The narrator seems to be immune to periods. Why waste time on breathing between sentences? Really, can't the producer hear the problems? How about some pace and inflection? It is tough to keep listening.

This is a good story and worth the time. But perhaps it is better in this case to go with the printed version.

I thought that this book would be good because it is connected to the going home series.. I was very disappointed. The storyline was awful and unrealistic. Neil is a coward and Charlotte is annoying. It's pretty bad when you're hoping that the main characters die. The only reason I listen to the entire book is because I paid $10 for it. The narrator has a great voice for a history documentary but was quite boring for a book like this. The narrator for the Going Home series Duke Fontaine, does such a great job at changing his voice for the different characters...the books about Morgan are fantastic but this book was overall a thumbs down.

What disappointed you about Hope?

The biggest issue was that its a 'short story' - not a full novel or series. These kinds of stories dont reach their full potential or any type of satisfactory 'ending point' in short stories. The only exception to that is if the short story is based off a character within a series.

Would you be willing to try another book from A. American and G. Michael Hopf ? Why or why not?

These are two of my favorite authors (A. American and the Going Home Series, G. Michael Hopf and the Long Road series).

Have you listened to any of Joseph Morton’s other performances before? How does this one compare?

Yes, Joseph Morton is 'tolerable' to me. He isnt my favorite or first choice, but he is FAR better than some I have listened to.

It was written by two of my favorite authors.

Terrible, amateurish, poorly written!!!!
I kept "hoping" that it would resolve itself, but no such luck.

Was really let down in every aspect of this book. Expected a lot more from these two authors.

Bought this because I liked previous A. American books, but this was really weak. Glad it was short. Plot was painfully simple and predictable.

Would you try another book from A. American and G. Michael Hope and/or Joseph Morton?

Yes, his surviving series is the best... this is a huge miss..

Would you ever listen to anything by A. American and G. Michael Hope again?

His voice was harsh and mono tone. Hard to engage with him.

Couldn't make myself finish it.

The story was lacking, and not even close the Home series by A. American. The true tragedy was the performance of the narrator.

Story was weak, characters were paper thin, narrator was awful. A. American is a good writer, G. Michael Hopf is not. I should demand a refund.