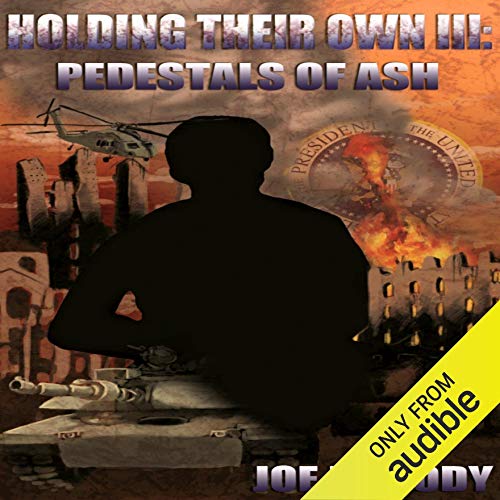 Holding Their Own III

Pedestals of Ash
By: Joe Nobody
Narrated by: Christopher John Fetherolf
Series: Holding Their Own, Book 3
Length: 9 hrs and 26 mins
Categories: Fiction, General & Contemporary
5 out of 5 stars 5.0 (2 ratings)

Holding Their Own III

By: Joe Nobody
Narrated by: Christopher John Fetherolf

Book three in Joe Nobody's popular series continues the saga of Bishop and Terri, as their post-apocalyptic world attempts to recover. Caught up in a power struggle to lead the recovery, the young couple are drawn away from their West Texas retreat and must use all of their skills to survive. The year is 2015 and the government of the United States has all but ceased to exist. The military controls some of the larger cities, but its loyalties are divided between the President of the United States and a new, growing organization called The Independents.

The Holding Their Own series, by bestselling author Joe Nobody, follows the adventures of a young couple as they survive in a world where anarchy prevails and society struggles to establish rule of law. In Pedestals of Ash, the third book in the series, Bishop and Terri are pulled away from their secluded retreat and thrust into the power struggle to rule.

What other book might you compare Holding Their Own III to and why?

The Survivalist. The two main characters posses the same philosophies of justice and willingness to protect those who can't protect themselves.

Somewhat. I guess it was that New England accent that threw me sideways. I found the rising voice at the end of sentences annoying.

This is a good read.

Minus the war room planning and the early politics then this book could have been great IMHO.

I do look forward to the next instalment after the introduction of Sophia (?).

Holding their Own III

As the story continues, it leads the reader into the build up of how different factions will or possibly react in this national crisis. I was impressed how the author brought about the militias and regular army into conflict and how they see the crisis.. Of course mixed in with how the "Low Lives" or criminal element deals with the rest of the citizenry. Can't wait to hear what up for Bishop and Terry in the next book...

Awesome series, must listen too.

Although the writing and story is one of excellence, the narration was not my favorite so far. The narrator did a good job but I just did not connect with his style of narration.

If the previous novels where cowboy novels, then this one is definitely a war novel. Joe nobody's works remind me of classic radio serials, or tv series. Just placed in the modern year. I would understand some people not enjoying it, mainly because Joe writes as an every man thinking through right and wrong. And not politics correctness.