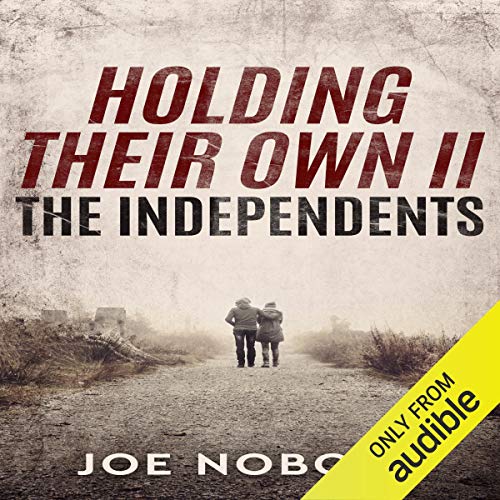 Holding Their Own II

The Independents
By: Joe Nobody
Narrated by: Frank Collison
Series: Holding Their Own, Book 2
Length: 8 hrs and 57 mins
Categories: Sci-Fi & Fantasy, Contemporary Sci-Fi
5 out of 5 stars 5.0 (2 ratings)

Holding Their Own II

By: Joe Nobody
Narrated by: Frank Collison

The second in the series, Holding Their Own II: The Independents, continues the saga of a young couple trying to survive in the post-apocalyptic American West. Unable to maintain rule of law, the federal government now faces an opposition movement and the threat of civil war. Bishop and Terri are drawn into the struggle and have to risk everything to save both an old friend and the country they love.

Would you consider the audio edition of Holding Their Own II to be better than the print version?

Do not know about the print version but the Audio is 100 percent better the 1st book.

Who else but Bishop

Which character – as performed by Frank Collison – was your favorite?

Please have book 1 redone.. I almost passed on the whole series because it is so bad. I do not believe many people will sit through it like I did

Can't get enough of this series.

Would you consider the audio edition of Holding Their Own II to be better than the print version?

What was one of the most memorable moments of Holding Their Own II?

There is not just one moment that stands out more than the others.

What does Frank Collison bring to the story that you wouldn’t experience if you just read the book?

Mr. Collison does an exceptional job at bringing the intensity and feeling to this story. His rhythm is perfect and the cadence was outstanding.

I'm not sure who this "Joe Nobody" is, but it's obvious he's actually been the area where the Book II unfolds.

Being from West Texas, I really enjoyed the story being set in the Big Bend area towns of Maraton (or, actually, Marathon) & Alpha (Alpine). I started college at Alpha State U (Sul Ross State University), so that was kind of cool, too. It's been over 3 decades, but I think I actually remember the ice cream shop in the story. Although, I don't remember a chemical plant being in or near Alpine. But, then again, it has been 30 plus years since my last visit. I suppose things can, and do, change.

A little morsel of goodness that one benefits from in the story is the little tidbits of desert survival info. They're spread pretty thin, but they are there. And, they are good, useful, pieces of intel.

The tactics that Bishop exercises are a lot less fantasy and illusions of grandeur that are often illustrated in other books of the kind.

The military units, on both sides, are described spot on. JN must have some actual military background, or has really done his home work. Save the fact that the 10th Mountain Division is from the North East Coast of the US, his description of the 1st Cav, out of Ft. Hood, was as factual as one could pleasantly expect.

Frank Collison is a fairly decent orator. His dialects and voices of the characters adds a welcomed addition to the fabric of the story. But, it would be nice if he'd pause for a quick second when the story changes characters and scenes, and obviously, paragraphs. His "read through', without even the slightest pause, gets aggravating and frequently makes the story hard to follow. I nearly wore out the "back up 30 seconds" button.

All in all, I'm enjoying the story a lot more than I expected. I'm looking forward to vol. III.

If you're looking for a story to kick back and loose yourself for a few hours, this is a good one. Just, be prepared to hover over the "back up button" so you can keep the different characters and scene changes straight in your minds eye.

Rise of the resistence.

Book two begins deciding the final disposition of the gold recovered from The Force after their demise. The existence of the gold has traveled far and wide and there are several people interested in possessing such. Even though gold is virtually worthless at the moment, there is the hope that the world may return to something resembling normal some day and gold may once again have value. As the tale continued a new group challenging the military and political control of the country made itself known. This resistance was comprised of 30% of the active military and 40% of the reserves. The resistance movement is known as The Independents. We will discover more about them, the important role they will play in future volumes, and what impact they will have on Bishop and Terri.

This narrator is exceptional
He gives the true feel of reality to the characters
I enjoyed the content of this story very much.

If you're looking for survival tips, this book won't help. Other than that, it's a very good story. Narration is much, much better as well. Lots of action. Bishop's slightly sarcastic, tongue in cheek humor keeps a smile on your face, too. My only reluctance for a 5 score is that Bishop becomes a bit of a Hollywood ninja in this and later books. A name that strikes fear in the hearts of grown men and gives children nightmares.

Regardless, a worthwhile read. Highly recommend.