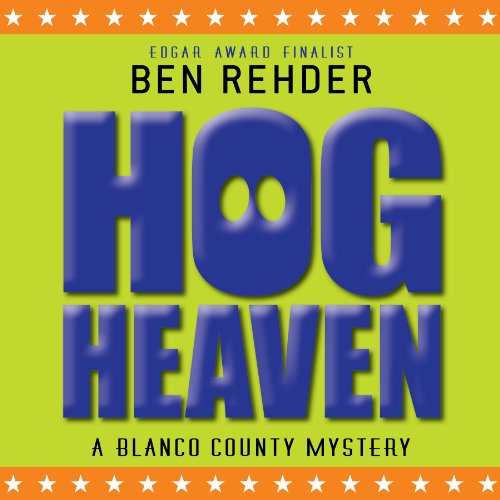 By: Ben Rehder
Narrated by: Robert King Ross
Try for £0.00

After a high-school football star dies in a late-night motorcycle collision with a wild pig, the boy's wealthy father comes up with a creative scheme to rid Blanco County of the feral pests: He tattoos the ear of one particular pig, then offers a $50,000 reward for anyone who shoots it. Game warden John Marlin is not pleased-chiefly because the bounty is likely to bring a wave of poachers and trespassers to the area. The tension rises even higher when the death of the local boy turns out to be more complicated than it originally appeared. Fans of Ben Rehder's earlier comic mysteries will be in heaven - Hog Heaven.

What listeners say about Hog Heaven

Really enjoyed this book. My favourite characters are back with another crime to be solved. Easy to listen to and the narrator is excellent.

A great listen to. You have a thriller, with a great humour , The characters are funny and enjoyable. Loved listening.

Format: audiobook
Narrator: Robert King Ross
I really enjoyed this story. A pig hunting contest gives rise to lots of humour and at last a bit of good luck for Red and Billy Don.
Very enjoyable series, well worth a listen.

Don't know about heaven but it's delightful

I enjoyed the story and think it is my favourite so far. I liked this story because despite having two stories (um maybe a few more sub plots, so much happened) running through the book it didn't get complicated and I was able to keep them straight and see how they were all connected. The mystery was good and liked it the way that college football and hunting were twisted together and thought it lead to an interesting adventure. All the usual characters played a part in the plot and you just have to love them, even the hapless poachers Red and Billy Don. Off to start the next book.
When a teenage football star died no body had any idea the trouble it would spark. He died when his motorbike hit a hog, leading to his father setting up a very unusual competition. He has tattooed a hog and then released it into the wild, the win gets a cash prize for killing it. The big problem game warden John Marlin can see is that nobody knows which hog is the right one until they have killed it and checked the ear and with the big cash prize they will get a lot of hunters take up the challenge. It is only after the boys phone is discovered that Marlin and the police find the reason the boy was traveling so fast, he was being chased. As they launch an investigation into his death they will have to delve deep into the world of college football. But with all.the extra hunters in town, tempers are going to flare and set off a hate crime that Billy Don isn't going to stand for. Red just wants to find the pig and get his money but with Billy Don in such a temper is he going to miss out on his big scoore yet again.
The author has stuck with this narrator for the last few books and I must admit he is growing on me and I quite liked him.
I was given this free review copy audio book at my request and have voluntarily left this review.

Read it but don't listen to this production

If you could sum up Hog Heaven in three words, what would they be?

Rehder's books are always a fun ride with his large cast of crazies who never fail to entertain. Hog Heaven is no different. I almost didn't download this book though because the narrator is new to the series, and I like my John Marlins to sound like John Marlin from Blanco Co., Texas. I'm not sure where this Marlin is from but it's not anywhere near Texas. There is very little distinction between Marlin, Phil, Red, Billy Don, Bobby Garza, Bill Tatum, or even Nicole...except for the chick from Russia. She didn't sound Russian, but she didn't sound Texan, either...nor did any of the others. Robert King Ross killed this book for me. I won't buy another that he voices.

Who would you have cast as narrator instead of Robert King Ross?

Where does Hog Heaven rank among all the audiobooks you’ve listened to so far?

What other book might you compare Hog Heaven to and why?

It's funny because I've listened to all the Blanco County books some with the same reader but this was the first one I can remember where RK Ross was so bod. His voices for Marlin was wrong as well as most of the characters.

Not really. It is a good story

What would have made Hog Heaven better?

I could only listen to 5-10 minutes. The reader was just too annoying.

Has Hog Heaven turned you off from other books in this genre?

Who would you have cast as narrator instead of Robert King Ross?

What character would you cut from Hog Heaven?

Where does Hog Heaven rank among all the audiobooks you’ve listened to so far?

Hog Heaven is just as great as the other Blanco County novels, that is to say right at the top of our list of all books for story. We love the characters, both new and old and both bad and good. However we were not as fond of this reader.

The plots, and there are several, kept us on the edge of our seats and guessing all the way about the outcome. Our guesses were frequently wrong which added to the fun. It was especially pleasing to see Red and Billy Don win one.

He is not very good with voices. Occasionally we couldn't be sure which character was speaking and he over dramatized somewhat. However he wasn't really too bad.

It made us laugh many times and it made us feel sad for Grady.

Really hard to listen to as his attempt at doing different voices is truly awful.

Blanco County sure does have lots going on at any given time and this book does not disappoint with this. So many mysteries that need to be solved and we have some great officers that jump right in and solve them all!

Our love able hero is back with another mystery solved through determination and a bit of luck. The bad guys are bad. The goofy semi-villains of earlier books look good by comparison.

As usual, important societal themes are examined - this time homosexuality in small towns and football recruiting practices. They fold into the plot, and interact well with the humor and glimpses of small town life in Texas.

Biggest news: John gets a cellphone!

The shoe is on the other foot now with Red and Billy Don, and Red is not liking it at all because it changes their dynamics and puts Red at the disadvantage. lol. This is so multilayered and many people have their own side agendas and it's hard to keep track of it all. What a ride *sigh*
I voluntarily listened to a free copy of this and am giving an honest review. The narrator did a great job with voices and expressions.

A high School football player dies, and Marlin has a run in with a dog runner.

This was another great story in the Blanco County series.